Here it is, the comeback the “Alien” franchise sorely needed.

“Nothing,” remarked Daniels (Katherine Waterston, “Fantastic Beasts and Where to Find Them”) on the noise level of her surroundings, a gorgeous planet seemingly teeming with conditions perfect for them, 2,000 in-cryosleep passengers and 1,000-plus embryos to colonize. Little does the character know this, but what spooks her is what hooks us: There is no “Ridley Scott’s return to sci-fi”-scale of buzz revolving around Alien: Covenant, and Sweet Brown is always on deck whenever the footage approaches non-tense content.

Yet, being a direct follow-up to “Prometheus,” the film has to wax theology at some point. Fortunate for all, is that sections of this nature are succinct and has fluidity here, no more is the drunkard who introduced the unexpectedly big ideas that conceive this prequel series. It’s clear that writers Dante Harper and veteran John Logan want the story of Alien: Covenant to be one of answers and explanations rather than questions and mysteries where some are more warranted than others. Take the introductory sequence where Peter Weyland (Guy Pearce, “Iron Man 3”) is testing out his new android servant David (Michael Fassbender, “The Light Between Oceans”) — in an area of four or five minutes we know how David got his name, how existence became a haunting notion and the perks of being Creator.

Such a refined and ominous seed for the horrors soon to befall the Covenant crew, which has deviated from the original destination to inspect a John Denver-heavy transmission stemming from the bellows of a rather familiar C-shaped starship. Those versed in horror sci-fi trappings know for sure everyone is entering a trap, but try and convince them to avoid the devil after enduring a crisis. In another display of storytelling efficiency, a freakish solar flare post opening-titles cremate Daniels’ captain husband (James Franco, “Why Him?”), thrust the leadership onto a born-stern-but-then-shaken Oram (Billy Crudup, “20th Century Women”) and make the rest who are awake rather aimless. As highlighted in the prologue short, “Last Supper,” the neat couples-only element in this team promises an emotional punch when a partner is endangered. Or severed.

79-years old the man may be, but Scott continues to set the bar for thrill-brewing and gut-spewing techniques. The titular beast isn’t alien to anyone who knows films (even if a whiter variant debuts here — only slightly different), but its well-known horrific nature stays refreshing through Scott’s pointed focus on the violence plus the aftermath, which veteran cinematographer Dariusz Wolski captures with sickening beauty and composer Jed Kurzel helps bolster with some futuristic purgatory-esque sounds. Quieter moments, sparse and brief they are, also demonstrate the director’s emphasis on using performances to set up the purest ounce of atmosphere. The result is two crew members’ search for what the computer, MUTHUR (voice of Lorelei King), calls an “unidentified life form” that is as gripping as later in the film, when the crew bumps into David and one android teaches his double the art of fluting. That latter sequence, though, has a bit more edge in terms of being memorable. Do try to stay composed when David tells Walter, the Covenant’s American-accented android, to concentrate on the “fingering.”

Here is also where Alien: Covenant shows its breaks with tradition. If no androids are on screen, the film follows the humans, nondescript as characters yet great as Xenomorph chow (some are convincing while being chowed down). Some little highlights along the way — such as Waterston’s Daniels is a bad-ass of her own, or the Ripley-free league and Danny McBride’s apparently great turn at being serious — but the people of the Covenant won’t be in the minds like those of the Nostromo or the Colonial Marines of “Aliens.” The film also marks the first time that motion capture is involved in building the Xenomorph, not for every appearance but those that do show an obvious touch of digital wizardry. At least the crew has the legendary Javier Botet (“Mama”) to “become” the central antagonist, and puppetry is still the order of the day for the chest/back/throat-bursting action.

The composure of Alien: Covenant is a tad less appealing when it does something on its own, all of which serve to build a foundation for what comes after. Like the creatures’ reliance on a host, the film is strongest when it fixes its predecessor’s “love” to be ponderous or has the technical department to be inspired by the original. It’s admirable to see a friend getting back to form, reclaiming the leanness and directness that got them the love initially, but it’s also worrisome to wonder where they will go from here. 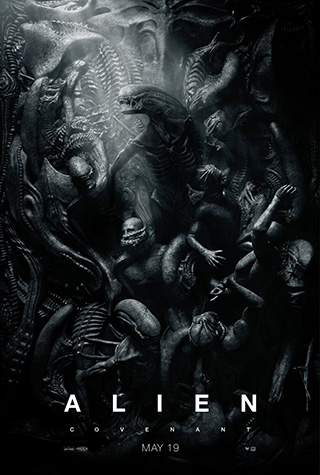