Mike Mills’ 2010 film “Beginners” was based on his relationship with his father who, at the age of 75, announced that he was gay and developed a relationship with a younger man. Mills takes another look at family life in 20th Century Women, a semi-autobiographical film about three adult characters looking back with nostalgia on their formative years. Both films deal with deep emotions and contain some outstanding performances, yet both are marred by self-conscious mannerisms that divert our focus away from the personal struggles of the characters.

Annette Bening (“Danny Collins”) is Dorothea, an emotionally distant yet spunky divorced mom struggling to raise her teenage son Jamie (Lucas Jade Zumann, “Sinister 2”) by herself in an older Victorian house. Dorothea does not live alone, however. There are also tenants such as photographer Abbie (Greta Gerwig, “Mistress America”), a recovering cancer patient, 17-year-old high-school student Julie (Elle Fanning, “Live by Night”), and William (Billy Crudup, “Spotlight”) who is doing renovations but would rather pursue Abbie than fix the house. Julie is Jamie’s platonic companion who sleeps with him without actually “sleeping” with him even though Jamie tells her how much he loves her.

Set in Santa Barbara, California in 1979, it is a time when things were altering for women and the film reflects that change. Mills has a feel for time and place and goes out of his way to let us know that, dazzling us with the music of Black Flag, the Talking Heads and the Buzzcocks, collages of Iggy Pop and other punk rockers, and snippets from books Our Bodies, Ourselves and the anthology Sisterhood is Powerful which are read aloud. Everyone in the house listens to President Jimmy Carter’s “crisis of confidence” speech in which he claimed that the “fundamental threat to American democracy” came from a crisis of confidence, reflected in the growing doubt about “the meaning of our own lives and in the loss of a unity of purpose for our nation.” It is a talk that only Dorothea seemed to appreciate.

Though Jamie is not a particularly troubled or troublesome teenager, Dorothea is in overwhelm and asks her female tenants to help her raise Jamie and turn him into a “good man” who is comfortable around women. He does not take too kindly to the idea, however, having his heart set on a real relationship with Julie who rejects the idea. “Having your heart broken is a tremendous way to learn about the world,” Dorothea casually tells Jamie in a late-night kitchen conversation. As far as sex is concerned, everyone talks about it but no one does much about it. Jamie offers a lecture on the proper technique for clitoral stimulation to a dense, bullying teenager, but ends up with a fist in his face for all his effort.

Abbie joins the party by turning a lunch with friends into a discussion of orgasm, virginity, and menstruation which, though edgy for its time, makes the men in the room and practically everyone else at the table uncomfortable. According to Mills, the film is “ultimately a portrait of all these women who raised me, who I love, that still confuse me, that are still, like, a mystery to me.” It is also the story of a man who realizes that he loved his mother without feeling that he really knew her. While the film has some funny and heartfelt moments and Mills coaxes out some terrific performances by Bening, Gerwig, Zumann and Fanning, 20th Century Women never seems to generate a reason to care very much about its characters. 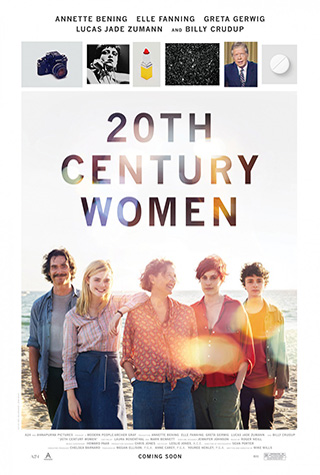