The signs for Live by Night are promising. Ben Affleck’s previous directorial offerings — “Gone Baby Gone,” “The Town,” “Argo” — showed ever increasing confidence and skill. The period gangster sub-genre has delivered such classics as “The Godfather,” “The Godfather: Part II” and “Once Upon a Time in America.” The source material, Dennis Lehane’s epic, sprawling novel of the same name, is a brilliantly complex tapestry of crime, passion, loyalty and power, detailing the passage of a career criminal from Boston outlaw to Florida racketeer. And the cast is a who’s who of current talent, including Affleck himself as protagonist Joe Coughlin; Sienna Miller (“Burnt”) and Zoe Saldana (“Star Trek Beyond”) as, respectively, Emma Gould and Graciela, the two very different women in Joe’s life; Brendan Gleeson (“In the Heart of the Sea”) as Joe’s father and senior Boston police officer Thomas; Chris Messina (“Ruby Sparks”) as Joe’s friend and ally Dion Bartolo; Chris Cooper (“Demolition”) as Tampa police chief Irving Figgis and Elle Fanning (“The Neon Demon”) as his daughter Loretta, who proves a remarkable obstacle to Joe’s operations in Florida.

And yet, despite all these merits, Live by Night fails to live up to its potential in almost every respect. Joe’s early experiences in Boston and shift to Ybor, Florida shunt along in a perfunctory manner, much like the lovingly detailed train that brings him to the southern state. Little sense of atmosphere is conveyed, either in restrictive Boston or sweltering Tampa, the film completely failing to give a sense of oppressive heat in the latter section. The supposedly powerful relationships Joe has with Emma and Graciela receive little build-up or sense of passion, while the strained father-son relationship similarly lacks dramatic meat, as it is already established but no detail is given to how Joe went the opposite route to his father. Joe’s most engaging association is with Dion (due to Messina emerging as a performer of strength and pathos).

The main problem here is that everything is too easy. Joe may run afoul of, respectively, Italian and Irish mob bosses Maso Pescatore (Remo Girone, “Mothers”) and Albert White (Robert Glenister, “Cryptic”), as well as the law represented by his father, but the film skips quickly through these various developments to the next plot point, while Joe’s establishment of a bootlegging and smuggling empire in Tampa is similarly straightforward. In his first solo writing endeavor, Affleck fails to compress Lehane’s myriad plot strands and themes into a two hour running time, despite trimming much of the book’s narrative. Perhaps a longer film, akin to “Once Upon a Time in America,” would have allowed for a more measured pace and in-depth engagement with the various locations and themes. This is not to say that the book is better, because films and books work differently. Rather, the adaptation fails to deliver on its promise by not giving enough space or attention to much of the material.

As sole screenwriter and director, the blame for the film’s failings can be laid at Affleck’s feet, making this his first stumble behind the camera. His previous efforts involved collaborative writing with Matt Damon on “Good Will Hunting,” Aaron Stockard on “Gone Baby Gone” and “The Town,” as well as Peter Craig on the latter, while Chris Terrio has sole writing credit for “Argo.” It seems that the influence of others on these scripts led to better pacing and more balance of the various themes in these earlier works. In the case of Live by Night, we get excessive voiceover and swift continuation of Joe’s experiences and rise to power. As a result, there is little sense of build-up, progression or even danger despite the brandishing of guns and the liberal spraying of bullets. Furthermore, sequences that could have been emotionally powerful are instead glossed over quickly, again robbing the film of weight and drama.

It’s not all bad. As one might expect for a Prohibition-set film, Jacqueline West delivers great costumes including some very sharp suits and hats, while Jess Gonchor’s production design, as well as Robert Richardson’s cinematography is evocative, all combining to create a strong sense of period. Furthermore, Affleck does not completely flounder behind the camera as he delivers some tight, muscular set pieces including a thrilling car chase and some brutal gun battles. On a purely technical level, these sequences are delivered competently and effectively. In addition, the performances are all fine, especially Cooper and Messina, but again, they are hampered by the film’s excessive pace that fails to give these characters or the themes that they embody and express room to breathe.

The thematic confusion is perhaps the film’s biggest failing, as the viewer may frequently wonder what Live by Night is about. The one standout moment is a discussion between Joe and a potential investor in a legitimate enterprise, during which Affleck delivers a monologue condemning the wealthy’s disregard for the public. Joe may be a gangster, but his concern for regular people is evident and well expressed in this scene, his position and disdain creating a resonance with contemporary debates over uneven wealth distribution.

Had the film focused on this theme, or indeed any of its various topics, it could have been gripping and compelling. But for the most part, Live by Night is a missed opportunity, a highly promising property that results in a period gangster flick that may be handsome, but is ultimately hollow. 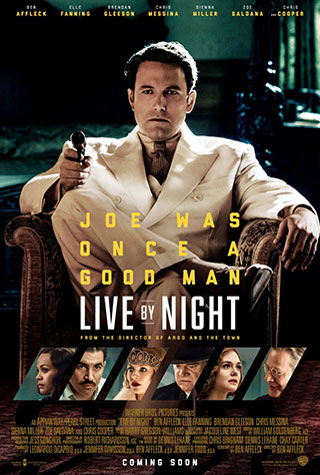