The original “Sinister” was an unnerving film that followed true crime writer Ellison Oswalt (Ethan Hawke) as he moved his family into a house where the previous occupants had been brutally murdered. While researching the crime, he discovered an old cardboard box of old 8mm home movies in the attic — horrifying depictions of multiple families being brutalized in their homes. Each home movie was more disturbing than the last, and the discovery of an ancient boogeyman controlling the young children behind it all was just the icing on the cake for horror fans. Remove those home movies, and you have a general run-of-the-mill supernatural film; with them, however, “Sinister” had horror fans squirming in their seats and turning away from the screen for the first time in a long time.

In Sinister 2, Oswalt’s buddy, Deputy So-and-So (James Ransone, “The Son of No One”), returns, tracking family murder cases that involve a missing child, and he’s been following the trail of Bughuul (Nicholas King) who still preys on young children and their families. But the movie only partially focuses on the now Ex-Deputy. The central family in Sinister 2 is the Collins family — mom, Courtney (Shannyn Sossamon, “The Heavy”), and her boys, Dylan (Robert Daniel Sloan, “Hero of the Day”) and Zachary (Dartanian Sloan, “Life’s an Itch”), who have recently escaped from an abusive husband and father (Lea Coco, “J. Edgar”).

Hiding her family in a vacant farmhouse, Courtney restores antiques in an old church next door where — you guessed it — a family was brutally murdered. Young Dylan is frightened of the church, and is suffering from nightmares of a murder in a cornfield. He’s also being haunted by a group of children under the control of Bughuul. Every night, Milo (Lucas Jade Zumann) and the other ghostly children show Dylan their home movies, which they insist will stop Dylan’s nightmares. Dylan resists as much as he can, but also fights his brother Zachary, who can also see the children and is jealous that they didn’t choose him for their movie screenings. The children press Dylan night after night, warning him that if he doesn’t watch the movies, Bughuul will be angry. Meanwhile, Ex-Deputy So-and-So (whose name is never given) meets Courtney and investigates the old church, convinced (correctly, of course) that the Collins family is Bughuul’s next target.

Sinister 2 is written by Scott Derrickson (who also directed the first film) and C. Robert Cargill (with whom Derrickson wrote the first film with), but despite bringing back the original creators of Bughuul and his malicious intentions, Sinister 2 just doesn’t have the same bite as the first film. Oswalt’s slow discovery of Bughuul in the first film was riddled with tension as he uncovered evidence of the ancient spirit in the home movies and still shots he printed out. Finding out he preyed on young children and persuaded them to murder their own families just furthered the horrific impact of the home movies. However, even though the focus in Sinister 2 is on the murderous children, they’re just not intimidating at all; unfortunately, they’re almost comical in their force on Dylan. It’s as if the one direction they were given was to put their chins into their chests and look menacingly up at their target. One even tries a malevolent smile, but to no avail. He just looks goofy. Even more unfortunate are the scenes between Sossamon’s Courtney and Ransone’s Ex-Deputy; So-and-So is generally an endearing character in the film, but when he’s in Courtney’s sights, he becomes a bumbling middle-schooler. And she’s no better! There are jokes made about the awkwardness between them, but they only exacerbate the groans from the audience.

It’s not uncommon that a successful horror movie is followed up by a less-than-stellar sequel. Director Ciarán Foy and writers Derrickson and Cargill try to recapture lightning in a bottle here, but the tension that comes with a new mystery and a new ghoulie is lost. “Sinister” worked because we were given a new supernatural occurrence mixed in with the unsettling murder cases. Since we now know about Bughuul and his children, there are only the home movies left to get under our skin (I will say that the original film’s lawn mower home movie has been topped in Sinister 2). That leaves the characters and situations as simple filler, getting you from one home movie to the next, and most of the frights are wasted on simple jump scares you see a mile away; even the spooky Bughuul has lost his impact and is relegated to schoolyard bully flinches (and we’ll pretend his last scare didn’t happen . . . talk about cheesy. Ugh).

Bottom line, rehashed ideas and situations will only get you so far; at one point in the film, So-and-So is contacted by the professorial Dr. Stromberg (Tate Ellington, “Straight Outta Compton”) with urgent information about Bughuul, and the Ex-Deputy comments, “Are you the new Dr. Jonas or something?” drawing attention to the fact that Vincent D’Onofrio did not return for the sequel. I won’t even get into the fact that children stalking adults in a cornfield with a scythe has a particularly Stephen King-ish feel to it; at least none of the children in Sinister 2 are named Isaac. 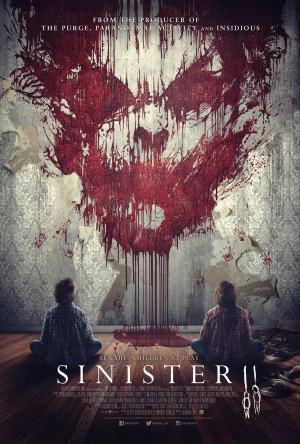