I will approach this review a little differently if you don’t mind. But allow me first to tell you a little story.

I made an irrational choice. I started my review for Irrational Man before I even saw the movie. Irrational indeed. I started this review before I even knew whether this movie was going to be shown in the city in which I live. This latter assumption wasn’t all that irrational though, as the movie theater/chain/monopoly that brings movies to this place has steadily shown each and every Woody Allen feature for the past seven years. But they didn’t do so with this one — at least not till two weeks after its release. Frustrated, I threw my review to the website’s trash bin thinking I wasn’t going to be able to write it — till I did. Thankfully, our editor is more rational than I am and the review never really went to the trash bin — only my intentions went . . . till now.

Such irrationality can only be explained by the love I feel for this director. Woody Allen has been a comedic beacon in my life and one of the most influential artists in the development of whatever I turned out to be, and he has been so since I was in my late teens. I know he’s démodé; I know it’s not cool to like him anymore. But, in my defense, I wasn’t even around when it was cool to like him. So my love, as is every love, as Woody Allen has tirelessly tried to show, is as irrational as it gets.

I know what you’re probably thinking by now: This review will be a waste of my time, for it’ll be a biased review written by a fan from hell. Well, not so much. A fan I am, but a movie-lover I am first. And Irrational Man is, to put it succinctly, not a good movie. Here is Allen (the adult version of Woody — not precisely his best version) playing yet again with another variation of “Crime and Punishment.” His appointed Raskolnikov is now played by a contrite Joaquin Phoenix (“Inherent Vice”) as Abe Lucas, and his Phoenix bird, his Sonia is once more played by the director’s most recent muse: A sparkling Emma Stone (“Birdman”) as Jill Pollard. And then, there’s William Barrett’s book to borrow something more than the title.

Lucas is a philosophy professor in his mid-forties who’s at the middle of a midlife crisis. Since he is specialized in Continental Philosophy and has some tendencies towards Sartrean existentialism, the results of Lucas’ crisis are a little more nauseating. Unable to find meaning in life, he arrives in Braylin, a small-time college that receives Professor Lucas in the same way in which an MLS team receives yet another star of times past — yet another washed out athlete. And washed out is Lucas. A heavy drinker with suicidal bents and a well-founded fame of starting (and starring) torrid affairs with his students, Lucas is nothing short of a cracked luminary. But then he meets Jill, an enthusiastic and overtly smart student with whom he starts a complex relationship, hence becoming something in-between a Socratic mentor a Platonic friend and a Sartrean lover. On top of that, an erectile dysfunctional Lucas starts an affair with a married colleague, Professor Rita Richards (a perfectly attuned Parker Posey, “The Eye”) who, in all truth, finds in Lucas a great alibi to leave her husband and feel young likely for the last time in her life. One day, as Abe is having breakfast with Jill at a diner, the latter finds herself eavesdropping during a rather gratuitous conversation — an activity to which Abe (voyeuristic philosopher cheating in his metaphysics quiz) joins without hesitation. It is then that his life comes together, as he finds himself contemplating the innumerable possibilities that open right in front of his eyes as he thinks in anonymously aiding a stranger. His charity, however, smells like murder, and thus he appoints himself the judge of a person he finds dispensable and places himself in the position of dispatching him off.

The plotline, now that I wrote the synopsis, is actually appealing, as Allen’s variation of Dostoyevsky’s masterwork is, in principle, enticing. This is primarily because the question he’s asking is as valid as it is dark — even cynical: Can someone appoint their self to help another person dispense of a dispensable individual — an individual that, one has unilaterally determined, does more harm than good? And this is and has been one of Woody Allen’s three main fortes, asking difficult, daring questions (the second being building complex, relatable characters, and the third writing witty, fast-paced dialogues). But questions aside, the film falls flat . . . and soon becomes a forgettable piece of entertainment (and that only if you’re into the director’s movies).

Allen’s Abe has stopped asking questions, and he finds himself in a sort of philosophical limbo (for what is philosophy without questions?) from where he sees his craft as nothing but “verbal masturbation.” Abe’s way out of this limbo is taking the leap from asking to judging, from the cold inactivity of thought to the boiling physicality of action — but an action devoid of responsibility. And it is this leap that Allen has never dared to take (and, if he had, according to his numerous [presumed] scandals, then he has never dared to take openly). As an artist, Allen has always stood in-between these two realms, between thinking and acting, between the speculative freedom of fictive action that art dispenses and the restrictive consequences of real choice that life provides. The result: An anxious artist . . . an over-rational man.

“Anxiety is the dizziness of freedom” says Lucas in one of the most felicitous lines of the film. And anxiety has been the driving force behind Woody Allen’s work. Speaking as a top level anxious, I find Allen’s way out of anxiety (if ephemerally, if only as a palliative) rather enviable — least we should forget this is a world class anxious. He produces and produces and produces work. Sometimes masterworks (i.e., “Love and Death,” “Manhattan,” “Annie Hall,” “Zelig,” “Hannah and her Sisters,” etc.), more often great, memorable works (e.g., “Sleeper,” “Broadway Danny Rose,” “The Purple Rose of Cairo,” “Match Point,” “Blue Jasmine,” etc.), and even more often forgettable works (too many to list). And Irrational Man no doubt belongs in this latter category. But let’s not forget that, if we know anything about Allen’s artistry, this is precisely how he proceeds. Every “bad” movie (which is never properly bad, as he has never directed one) is there as a rehearsal for a masterpiece . . . or even for a very good, memorable movie — for we should keep in mind that everything that we find ripe and pitch perfect in his better films is to be found raw and undeveloped in his lesser movies.

The latest incarnation of Allen’s anxiety (that is, an irrational fear of the future, both the immediate one and the imminent one or, in other words, death) has adopted quite dark tones lately. His innumerable variations of death as life’s driving force have met the most obscure of all inclinations in his latest works: That of taking life away, that of giving death. Since what is for me his last masterpiece, “Crimes and Misdemeanors,” there is in Allen an obsessive necessity to explore the reason as to why we shouldn’t murder, and to inquire upon its implications (for everybody, but mainly for the murderer). This necessity has often left the director speechless, thus taking detours so as to hurriedly finish his yearly work — not doing so would certainly produce in Woody an unbearable guilt, and thus the worst kind of anxiety, the anxiety of the work that never was and could have been.

This is the reason why I find the demands placed upon Allen’s movies, the unrealistic expectations of his followers as well as the calculated overreactions of his detractors, rather unfair — or, better said, really childish. I just can’t get my head around as to where this sense of entitlement comes from; how come that we can feel entitled to ask an artist (and it can hardly be contested that Allen is one) to create only great works or, at the event something does not meet those standards, shut himself up?

If there is something that Woody Allen has shown consistently over time is that he doesn’t care at all whether people likes his movies or not — and the same goes to his life. Most of Allen’s detractors have found in his personal life an infinite source of shaming . . . and in his scandals a juicy font of self-righteousness. And there are very few things I find more senseless than to try to measure an artist’s work with the stick of the artist’s life. Should we be consistent with this principle, there would be very few people whose work would be worth watching (or listened to, or read, etc.). Maybe we would be reading only St. Augustine and nothing more — and that’s just maybe. If there’s a director who no matter what he does he will always disappoint at some point (either followers or foes or the moral police or scholars or film critics . . . or all together), that is Woody Allen. And that’s really, really unfair.

Luckily, Allen has worked so much that he has spent his life rehearsing his perfect film, that film that will never come, and, in that way, he has transcended criticism. Woody Allen’s movies can be criticized more or less effectively, but Woody Allen as an artist is well beyond that. He seems to have gone past the preoccupation about his legacy and has focused on exploring the relation that occupies him the most: The relationship between time and death . . . his own mortality. And rather than wasting our time demanding anything at all from him, we should be happy that he’s still around, and that he’s still productive, for he is an old man and his time is imminently coming. How will he say goodbye? I don’t have a clue (and, honestly, I don’t think he has either). Will he have the time to produce another masterwork? Will it be his last film? Might he? Well, hopefully yes. Must he? Hell, absolutely not. 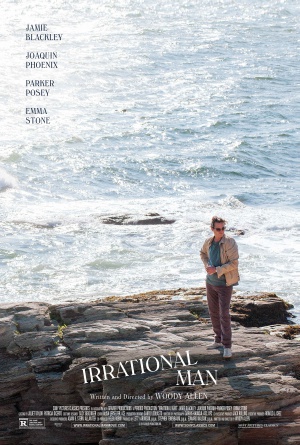