There are many levels to Erik Kristopher Myers’ deeply satisfying horror film Butterfly Kisses, which is more an exploration of authorship and authenticity than it is a straightforward found footage flick. To be honest, the horror element is probably its weakest — bluntly effective jump scares are all we get. But then, visceral thrills are not the primary point here.

No, the real value comes from the overlaid stories which are, “Inception”-like, competing for reality. There is us, the audience, watching a film made by Myers; but Myers also plays the documentarian within the film, who’s making a piece about a documentarian, Gavin (Gavin York); and Gavin is in turn completing a supposed documentary work by Sophia (Rachel Armiger, “Revan”) and Feldman (Reed Delisle, “Shelter for the Bloodstained Soul”), about whose authenticity there are doubts.

The most successful dynamic — from our perspective as the peak observers of all this — is the one between Gavin and the subject of his opus. The footage he is assembling is apparently by Sophia and Feldman; but by remastering the footage, editing it, and enhancing the sound, does their film become Gavin’s? If he arranges the story elements and insists they amount to “reality,” doesn’t that make him the author?

In “Ways of Seeing,” the filmmaker and author John Berger argued that the reproduction of art removes it from the context of its original creation, rendering it vapid and worthless. This is the position from which Myers — that is, his character within this film — is coming. But he is up against fellow filmmaker Gavin, who is unshakable in his determination to see his film made, and made sense of.

In a neat piece of screenwriting, Gavin is on the edge of financial failure. With a worried wife and a young son, he desperately needs “Butterfly Kisses” to be a success. But he’s not the only one. Myers himself needs a documentary. Myers needs a story too; he openly admits to needing an ending. So, when Gavin goes off the radar and Myers turns the camera on himself, how can we believe what he says and what he shows us? There’s a suspicion, just as Gavin took the baton from Sophia and Feldman, that perhaps Myers is simply taking the baton from Gavin. It embeds the trope of the “forbidden videotape” in an endlessly repeating cycle, right before our eyes.

The actual monster Sophia and Feldman were attempting to document is a mysterious and awkward beast. According to local legend (delivered through some convincing sidewalk vox pops), there is a ghostly gentleman — looking not unlike the Babadook, it must be said — who can be summoned into existence by staring down a railroad tunnel without blinking for a full hour. Saying “Candyman” five times in front of the mirror is just too easy! “Peeping Tom” must go down as the most paywalled specter in horror history.

Anyway, once conjured, Peeping Tom (AKA “Blink Man”) will come for you, getting a little closer every time you blink. Finally, when he’s close enough, his eyelashes will tickle your face and force you into blinking. Hence the film’s title. Presumably he would have removed his top hat by this point, or else the rim would surely get in the way. I’m being deliberately facetious because I’m sure that the silliness of Peeping Tom and his overthought tapestry of rules is deliberate on the part of Myers. It’s a parody of the very idea of urban legends, contrived as they are, and also a reflection of Gavin’s inability to get his film off the ground.

Nothing can be trusted. The scratchiness of the Sophia and Feldman footage and the glitched sounds are par for the course in abrasively edited 21st century horror. Is this the sound and image mastering we see Gavin pursuing? Or is Myers — as the director within or outside of the film — holding a mirror to the demands of modern horror aesthetics? The images are almost deliberately unscary.

In the consistent disdain Gavin faces, there’s something here not just about the essential problem with found footage in an age of ubiquitous visual recording, but also the effect this has on audiences, who are increasingly skeptical, observing in an age where authenticity is assumed guilty until proven innocent. There’s a great scene where Gavin brings his “proof” of Peeping Tom to a local paranormal investigators’ group and he’s laughed out of the room with the derision that usually follows a Sacha Baron Cohen character.

What makes Butterfly Kisses (as in, the wider film I’m writing about here) work so well is the level of authenticity achieved by the actors. York is eminently convincing in the central role. Initially likable, we soon see his dark side when he antagonizes all of his interviewees, before finally our sympathies swing back as we share his tiredness of the cynical world in which he is trying to vivify his Frankenstein.

Performance-wise, there are very few dud notes, and there are only a handful of moments where it makes no sense for the camera to be running. The standard-def camerawork (Sophia’s film was shot in 2004) helps to sidestep budget restraints, while also adding to the sense of doubt about the validity of what we’re seeing. A late interview with the real Eduardo Sanchez (director of “The Blair Witch Project”) helps to blur the lines of reality, which are fairly pixelated by then anyway.

Butterfly Kisses isn’t a brilliant horror film in the shock factor sense, but it’s a brilliant film about modern horror films. If you thought Kevin Williamson’s “Scream” was meta, just wait until you see the layers at work here. It’s not just self-referential, it’s self-replicating. What a fantastically mind-bending rabbit hole Myers has dug. I haven’t felt this lost or distrustful since Shane Carruth’s “Primer.” It may be a new beginning or the definitive ending for found footage — either way, it’s an instant classic of the genre. 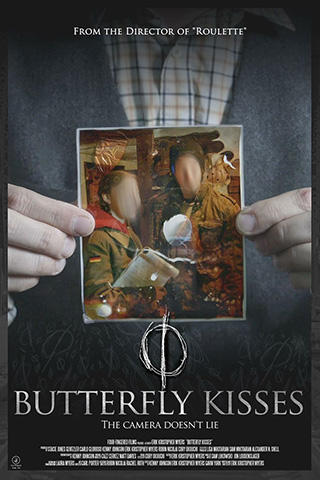