“I feel like I am the moon, so bright. But after a while, the brightness is fading away” — Tantra

The Persian poet Rumi said, “The nature of reality is this: It is hidden, and it is hidden, and it is hidden” In Bali, Sekala and Niskala refer to the everyday world we see through our senses and the deeper reality hidden from our conscious vision. Translated into English as The Seen and Unseen, Indonesian director Kamila Andini’s (“The Mirror Never Lies”) haunting second feature poetically explores both worlds through the vision of the twins, Tantri (Thaly Titi Kasih) and Tantra (Ida Bagus Putu Radithya Mahijasena), her 10-year-old brother. The inseparable siblings are referred to in Balinese culture as “buncing” (boy-and-girl) twins, a symbol of “balance” in which they “complete each other.”

In the film, Andini evokes a dreamlike tale of childhood that suggests the influence of Indonesian director Apichatpong Weerasethakul whose films of death and rebirth live on the border between the objective world and that of the spirit. Eliciting strikingly real performances from the child actors, the film explores the influence of tradition, the innocence of childhood, and the emotional strength required to cope with trauma. Revealed to be suffering from a brain tumor that is slowly shutting down his body, The Seen and Unseen opens as Tantra is being moved to a hospital bed as sister Tantri and mother Ibu (Ayu Laksmi, “Satan’s Slaves”) look on with profound grief.

In flashback, we see the twins running through the fields, planting rice, and Tantra providing eggs for Tantri to cook. Though she does not like egg yolks and he dislikes the whites, in a scene that seems to foretell the future, Tantri peels a boiled egg, but there is no yolk inside. When her parents move to the city to make sure that Tantra is provided with the best care, Tantri is left to seek her brother in her imagination. Shown from Tantri’s point of view and enhanced by the music of Yasuhiro Morinaga (“Yamato (California)”), the film finds its center in the world of images using mystical songs, poems, and dances from the Balinese culture to express the sibling’s emotional distress.

Helping to bring the mystical elements of The Seen and Unseen to life, the cinematography of Anggi Frisca (“Night Bus”) provides a balance between the two aspects of reality as exhibited in a stunning “moon” sequence in which we see a full moon, a bamboo tower, and a spirit dancer. Making use of shadows, Tantri stages a puppet show from behind his hospital bed, singing about the moon goddess Ratih and the headless demon Kala Rawu. Ultimately, Tantri is only able to fully express her rage by dressing as a monkey using leaves and branches and performing a wild and uninhibited “Totentanz,” a dance of death. In the dream world, a heartbroken Tantri tells her brother, “If only I could replace you, I’m willing to feel the pain. I’m willing to be sick,” but the universe, which is always perfect, has other plans. 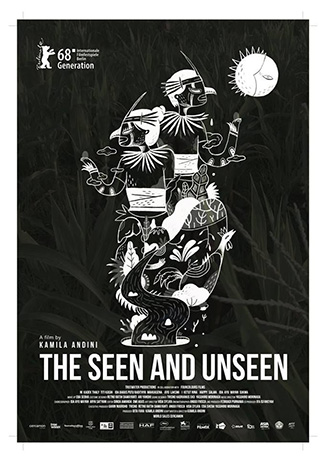