Choosing a third remake of A Star Is Born, a classic rags-to-riches movie that has a history of attracting legendary talent from Fredric March to Judy Garland, as your directorial debut is a risky move, but it’s one that Bradley Cooper pulls off quite well. The actor’s rise from TV sidekick to cool comic relief to celebrated A-lister has been a surprising trajectory already, so Cooper’s smooth transition to behind-the-camera ringleader merely marks another impressive chapter in his professional growth.

Perhaps it’s more surprising that Lady Gaga (“Muppets Most Wanted”), this version’s titular Star, is so good in her role of Ally, a restaurant server by day who catches the eye of country star Jackson Maine (Cooper, “American Sniper”) during one of her after-hours singing gigs. Gaga may have plenty of experience in front of cameras, but her sparse acting credits have been mostly limited to bit parts and cameos as herself, so tackling this huge part in a big-screen feature poses a considerable challenge for her.

Just as her director/costar rises to his own challenge of juggling so many responsibilities, Gaga wholly and excitingly embraces the task at hand, pouring her heart and soul into her character’s tumultuous and meteoric rise. Perhaps what is most intriguing about Gaga’s performance is how it mirrors much of the onscreen relationship.

The story, as told several times before, is of an industry veteran that falls for a wide-eyed dreamer and then helps launch her into orbit, only to find that fame is fickle. The veteran helps his partner out and then reaches a point where she doesn’t need his help anymore, where her star eclipses his. Their changing careers become the backdrop of their love story.

Fittingly, Cooper clearly helps Gaga become a better actress, supporting her both on sides of the camera. As the movie progresses, the star comes into her own and fills the screen convincingly and compellingly. The key here is that the role and material fit Gaga like a glove and that goes a long way to helping her honestly capture the character.

It’s easy to engage in hyperbole when someone with little acting experience suddenly unleashes a spectacular breakout role, but it’s equally easy to temper the temptation by simply suggesting that Gaga is less a chameleonic talent than a confident superstar who has chosen wisely. Her chemistry with Cooper sizzles and her real-life success in the music industry automatically lends authenticity to Ally’s arc.

As the more seasoned pro of the pair, Cooper fares even better, croaking out a weathered drawl and drunkenly stumbling around in a manner that feels deeply lived in. It’s quite possibly his best performance to date, a juicy reminder of how far he’s come as an actor and how beneficial those years spent making David O. Russell movies clearly were for him. He’s stretching himself here, doing something he hasn’t done before, and making his considerable transformation look utterly effortless.

These two lead performances, along with some stirring new songs, are the greatest strengths of A Star Is Born by far, which makes sense considering the subject matter. Gaga and Cooper really click with the emotional elements of the material and bring a lot of energy to the very simple and familiar story.

Their combined charisma helps iron out some issues. Cooper, who also co-wrote the script, faithfully recreates moments and lines from previous versions of the tale, which is an understandable decision, but one that proves his focus is on crafting a respectful remake rather than modernizing through innovation. There’s nothing inherently wrong with such an approach, especially since many filmmakers mounting remakes do so out of fondness for the original(s). It only seems as though a fourth version of the story, arriving more than 80 years after the first take, should have more room to breathe on its own. Instead, Cooper specifically molds his movie to mimic the 1937 original a little too stringently.

His directing is slick, solid, seasoned, all things that don’t usually come naturally, but it’s also unadventurous throughout, sturdy to the point of being overly mechanical at times. It’s a good debut, but the riskiness of tackling this property is softened by a certain degree of safeness that mutes the movie’s dramatic impact.

Less of a pointed criticism is that the pic’s best moment, a bring-the-house-down performance of signature song “The Shallow” as Jack pulls Ally onstage unexpectedly, is positioned well before the halfway point of the 135-minute movie. In many ways, that’s not a big deal, but it’s an epic high that the movie fails to reach again.

With Cooper’s steady hand behind the camera and his chemistry with Gaga lighting up in front of it, A Star Is Born still works as a whole and these quibbles take a backseat for much of the running time. Notes of comic relief amidst the grooving gravitas are nicely balanced as well, aiding Cooper’s aim to deliver a crowd-pleasing experience. The screen isn’t exactly set ablaze, but considering this umpteenth remake’s high potential for redundancy, its star burns bright enough. 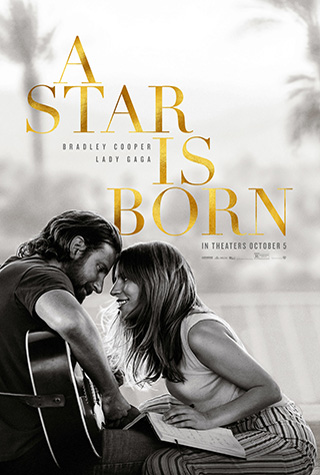