Feeling all horrored-out after your Halloween movie marathon? Don’t hang up your crucifix yet — The Shed is a bite of gory fun to keep the party bleeding.

The shed belongs to Stan (Jay Jay Warren, “Day of Reckoning”) — or, more specifically, Stan’s abusive ex-veteran grandpa, Ellis (Timothy Bottoms, “Pound of Flesh”). Stan’s folks are long gone, and so are his prospects. A product of juvie on the cusp of adulthood, in this small town everyone figures him to be destined for jail, or worse.

Even Stan’s best friend Dommer (Cody Kostro, “Living with Everyone”) believes there’s no hope. The only people with any faith in Stan are the two women in his life: The decent-but-fearsome Sheriff Dorney (Siobhan Fallon Hogan, “Going in Style”) and Stan’s would-be girlfriend Roxy (Sofia Happonen).

At his lowest ebb, Stan discovers the vampiric beast living in his shed. Through a series of unfortunate — dare I say, implausible — events, the day-shy Bane starts claiming lives. As the bodies pile up, and Stan’s chances of looking anything except guilty vanish, Stan concludes he must vanquish the monster. Easier said than done.

It’s not clear when The Shed is supposed to be set, although no one seems to have a cellphone and Stan listens to his “doomy” rock on a tape deck. This could be a symptom of overwhelming poorness, but it also points to the 1980s, which is where the film seems to be drawing so much of its inspiration. Though reticent to show its monster, this resolutely old-style film has an admirable commitment to practical makeup effects, along with simple spooky techniques like brightly backlit fog. It just lacks a sprinkle of the folklore element that gave movie like “Halloween” and “A Nightmare on Elm Street” that touch of depth.

This is Frank Sabatella’s first full feature in ten years (“Blood Night: The Legend of Mary Hatchett” was out in 2009, in case you wondered), and he offers enough style and scares to hope that we don’t need to wait another decade. The use of Steadicam is particularly impressive, providing a sense of woozy mobility, and offering the ideal way to frame characters inching ever closer to the charnel outhouse. Some scenes stand out in the wrong way — some rather inert fight scenes and a shoddy “tooling up” montage spring to mind — but mostly the action is pulled off with panache.

Sabatella’s script isn’t half bad either, if you’re willing to overlook some curious character motivations (why does a terrified Roxy run into the arms of Stan after seeing body parts in his back yard?) and a last-act descent into house-siege cliché. There is a real sense that Sabatella has loaded the titular shed with meaning. It is, I think, the rage at the heart of men. This is something that frightens Stan — “If it gets out, it will kill me” — but intrigues his buddy Dommer, who longs to harness its power and overcome his own impotence. Rather than being a mere totem of terror, the shed is (for the first two thirds, anyway) the fulcrum around which other, more interesting personal rivalries and tensions circle.

With his unkempt mop of hair and vulnerable eyes, there’s something of the late Anton Yelchin in Warren, and his fractious relationship with Kostro’s Dommer is convincingly played between the pair. Happonen is good also, even if she is stuck with the clunkiest role. Roxy is strong and determined, but she does fall into the hackneyed role of the woman as the dampener of male rage.

The Shed is a hokey, flawed but impressive sophomore effort from a horror filmmaker I will follow with interest. It’s got pace, energy, humor and style, and it’s pleasingly bereft of winking self-reference. It’s a raucous chiller, perfect for a chilly night. 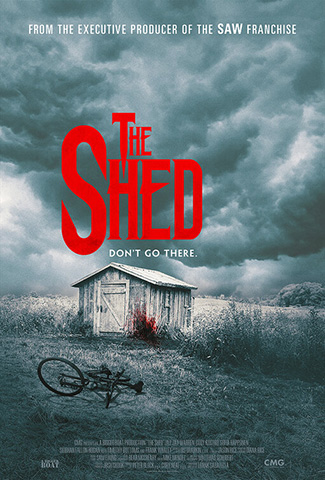