Few may realize that Going in Style is actually a remake of a 1979 film starring Academy Award winners George Burns (“The Sunshine Boys”) and Art Carney (“Harry and Tonto”) and an Oscar nominee, Lee Strasberg (“The Godfather Part 2”). The tale in that film has three senior citizens who share a small apartment in Queens, New York. They live off social security checks and spend their summer days sitting on a park bench, reading newspapers, feeding pigeons, and fending off obnoxious children.

It is a dull life, and finally Burns is driven to suggest something radical to break the monotony. After their monthly visits to their local bank to deposit or cash their monthly social security checks, Joe privately suggests: “How would you guys like to go on a stick-up?”

In the newest version, starring Oscar winners Michael Caine, Morgan Freeman and Alan Arkin, the reason is a little more urgent as the steel company the men worked at for more than 30 years has been sold, has outsourced its product and eliminated pensions (where’s Donald Trump when we need him?).

Each has their own individual problems, as well. For instance, Joe (Caine, “Now You See Me 2”), is about to be evicted; Willie (Freeman, “Ben-Hur,” another remake) has a severe kidney ailment; and his roommate, Albert (Arkin, “Love the Coopers”), is a basically a crusty, bitter old fart. With no pensions, each is facing life on the street, so out of desperation, Joe comes up with the idea of robbing the bank responsible for repossessing his home.

The concept is born after he witnessed the same entity robbed of more than $1 million a few weeks earlier. Since the older guys have more experience (although none has committed a crime before), Joe believes they actually CAN pull this off. This part of Going in Style requires a huge amount of suspension of disbelief, especially when a financial institution loses such a large amount of money just a month before and does NOTHING to boost their security and defenses.

Back to that part later, though. In the meantime, the three actually decide to make the effort and recruit a local hood (John Ortiz, “Kong: Skull Island”) to teach them the ropes, while the cantankerous Albert seems to be the least likely of the trio to attract the still attractive Ann-Margret (“The Break-Up” and also an Academy Award nominee, “Carnal Knowledge,” “Tommy”).

Also adding some measure of support is the addled old man, Milton (Christopher Lloyd, “Piranha 3DD,” but forever immortalized for his role as Doc Brown in the “Back to the Future” franchise), and Brooklyn (Joey King, “Independence Day: Resurgence”), Joe’s precocious granddaughter. In addition, Matt Dillon (“The Art of the Steal,” but probably more remembered as the hilariously sleazy private dick in “There’s Something About Mary”) tags along as an idiot FBI agent.

The actual heist is like watching “Ocean’s 11” in slow motion, but is fairly compelling in its own ridiculous way. Wearing masks representing the “Rat Pack” (Frank Sinatra, Dean Martin and Sammy Davis, Jr., unlike the Groucho Marx noses worn in the 1979 original), the only thing that can stop them seems to be a panicked, pompous bank official (Josh Pais, “That Awkward Moment”) who happens to be armed while our protagonists carry guns loaded with blanks.

There are complications and I am certainly not going to reveal anything, but under the direction of Zach Braff (“Oz the Great and Powerful,” but best known as JD on the TV series “Scrubs”), things are just a little too cut-and-dried and is played too safe. The trio is charming and engaging, mostly, but there is no real drama or pathos to Going in Style and the whole reason for their plight is not really something most audiences will care that much about. 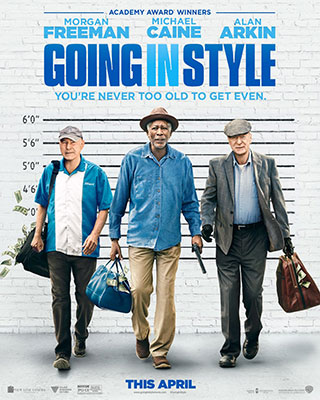