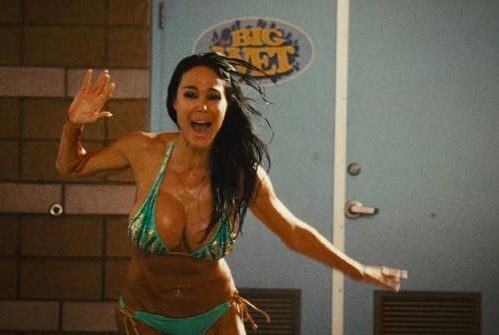 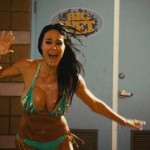 I’ve got one burning question: Why wasn’t there a Big Wet Water Park in the tri-state area during my formative years? You know the kind that objectifies women and follows the tried and true path pioneered by strip clubs. The kind that is a sanctuary for college-aged girls to drink and consume drugs at, frolic around unclothed in and make out with each other without fear of persecution. All I had was Action Park but, to its credit, it didn’t have giant prehistoric flesh-eating fish like Big Wet Water Park does. Flesh-eating fish, it seems, isn’t good for repeat patronage (although I probably would have dealt with the fish had I had a choice).

But the problem with Piranha 3DD isn’t that there are killer fish or that it shoves everything women have worked so hard for back to the Stone Age, it’s that no one attached to the film bothered to even try (other than the girls with the big, bouncy tits). The story, written by Patrick Melton, Marcus Dunstan and Joel Soisson, is about as bad as any story could be — the piranhas escape the lake they terrorized in 2010’s Piranha 3D and migrate to a water park. A water park that puts in its water a mixture of chemicals that kill anything living in water nearly instantaneously. A water park that is comprised of a few pools and Jacuzzis encapsulated by concrete that could be easily evacuated once a single razor-toothed predator was observed.

No, reality wasn’t in the cards. Had it been, prudish Maddy (Danielle Panabaker, “The Ward”) wouldn’t have had anything to bitch about to dirty businessman Chet (David Koechner, “The Goods: Live Hard, Sell Hard”) whose illegal drain is the cause of all the problems or dirty cop Kyle (Chris Zylka, “Shark Night 3D”) who looks the other way. Lucky for her, she’s kept too busy running around like a headless chicken to have to drop her clothes around her ankles like everyone else, although I never understood how or why the main protagonists in exploitation flicks like this stay clothed.

Not so lucky are people like pool man Big Dave (Adrian Martinez, “Casa de mi Padre”), super hottie Shelby (Katrina Bowden, “American Reunion”) or her boyfriend Josh (Jean-Luc Bilodeau), however. These three do, or have done to them, some of the strangest — no scratch that — the stupidest things imagined on film. I won’t divulge what they are as perhaps beyond the T&A it’s a potential draw, just know you’re in for a treat of head-shaking asininities that I believe break the laws of biology (and good taste). 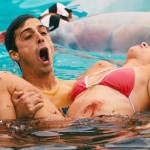 And while I’m a big fan of celebrities lampooning themselves, Piranha 3DD can’t even get that right. David Hasselhoff, who has done similar in “Dodgeball: A True Underdog Story,” is given a lot to work with but what he’s given is tasteless. He’s got a few zinger lines that will draw out a laugh, but they’re mostly drowned out by the fact his pompousness comes at the expense of dozens of people bleeding at his feet. It could be said Christopher Lloyd is lampooning himself too as he hams it up as a crazy scientist yet again, although at this stage in the game I doubt he even realizes what it is that he’s doing anymore.

His Alzheimers is probably a good thing, though — at least he has the luxury of an excuse. As for the rest of Piranha 3DD, there are no excuses that can explain it away (and it scares the shit out of me that it ends with the setup for another sequel). 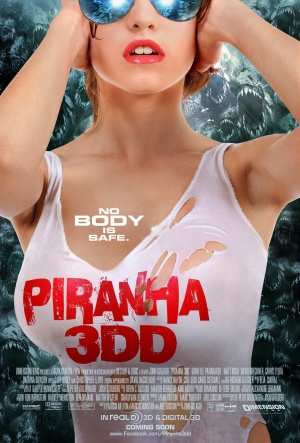