Written and directed by Brian Crano, Permission is a unique take on modern romance that deserves more attention than it’s gotten, particularly for its wide array of truly likable characters. Set in Brooklyn, the film examines a long-term couple who become interested in expanding their experiences beyond each other, and honestly considers the consequences of their decision to try opening up their relationship. Anna (Rebecca Hall, “Tumbledown”) and Will (Dan Stevens, “Beauty and the Beast”) are the central characters only in technicality though, as we also see plenty of Anna’s brother Hale (David Joseph Craig, “The Gift”) and Will’s best friend Reece (Morgan Spector, “The Drop”) who are in a monogamous relationship with its own problems — primarily revolving around Hale’s desire to have children.

Permission, therefore, is highly invested in more than one story, a fact which turns out to be both its best feature and its biggest problem.

It all starts with a drunken suggestion from Reece, but as we quickly discover, the idea of being with other people is more intriguing to the couple than they originally let on. For Anna and Will, that they love each other and plan to spend the rest of their lives together is a given, so there is no harm in simply sleeping with other people. Beginning their adventures by hitting a bar, the duo soon come face-to-face with the reality of their decision when the ruggedly charming Dane (François Arnaud, “The Man Who Was Thursday”) approaches Anna. Being careful to double-check with Will — the couple ask each other the question “Are you okay?” so much it’s both endearing and frustrating — she goes home with Dane. Later that week, Will meets Lydia (Gina Gershon, “My Dead Boyfriend”), an attractive older woman who visits his woodworking shop. Interestingly enough, Crano does not tiptoe around the difficult emotions in Permission, but does tiptoe around the sex itself, which is a shame. Without a clear sense of what their new sexual experiences provide, it’s difficult for us to understand why Anna and Will wanted to try this arrangement in the first place.

The performances throughout are noteworthy, with Hall in particular standing out as she tackles Anna’s underlying dissatisfaction in her current relationship and the possible factors behind it. With a thoughtfully written screenplay as the foundation, Hall is able to fully address her character’s need to discover who she is outside of her relationship. Stevens is also wonderful to watch as he infuses Will with a quirky charm and palpable pain in certain moments, although his character is slightly worse off as a result of a kinky preference shoehorned into a later scene. Both of their sexual partners, Dane and Lydia, are portrayed with a refreshing sense of individuality by Arnaud and Gershon, allowing the audience to stay immersed in their potential as actual people as opposed to stereotypical indie-drama characters.

The secondary plot, following gay couple Hale and Reece, also makes sure to infuse each character with enough personality to ensure that they are never seen as the “token gay couple” but instead are treated with the same sense of depth and honesty as Anna and Will. Craig’s ability to portray a quiet need for more is in perfect balance with Spector’s almost-aggressive representation of contentment. As an added bonus, Jason Sudeikis (“Sleeping with Other People”) is an understated joy as Glenn, a new father with whom Hale is able to talk openly about parenthood. Yet as the script bounces from story to story — revelation to revelation — we’re often left feeling that the whole thing is rushed, pulling us too abruptly out of moments of real poignancy. Given that one of the biggest strengths of Permission lies in its willingness to examine the raw emotions involved, it’s unfortunate to find its legs often cut out from underneath itself.

By attempting to say too much on the topic, Permission ends up not saying very much. Crano’s ability to approach the subject of monogamy without heavily leaning to either side is certainly commendable, but this film had the potential to expand how society views monogamy in a genuinely thought-provoking way. The theme is certainly nothing new, so it would have been a nice change for the material to be more vulnerable and challenging. Nevertheless, with a strong ending and remarkable characters, the film is certainly a thoughtful piece worth watching. 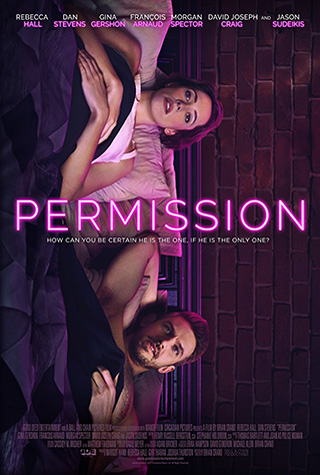