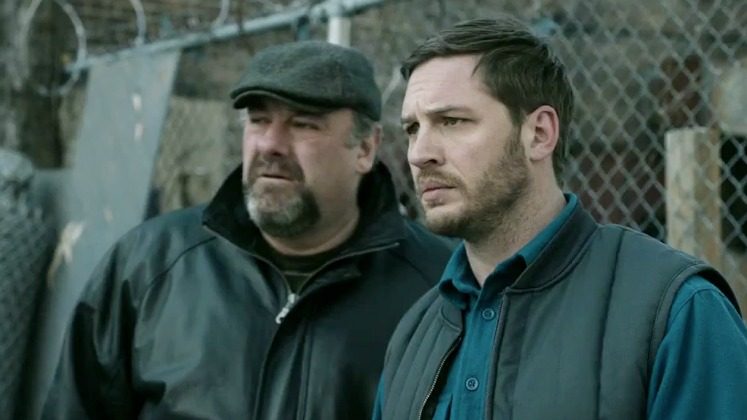 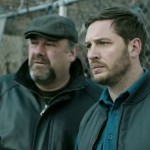 In The Drop, Tom Hardy offers a subdued performance as a bartender in a two-bit dive that gets held up by crooks who apparently don’t realize that they’re stealing mob money. The subsequent investigation slowly stirs up old neighborhood stories and tragic secrets.

Hardy’s Bob Saginowski is an area lifer; he and his cousin Marv (James Gandolfini in his final film) run the joint, which Marv owned a long ways back and that still bears his name. Marv isn’t a terribly nice guy — he’s a bitter roughneck who apparently frittered away his beloved bar thanks to gambling debts. Bob, on the other hand, seems to be almost a cipher to the regulars; a guy from the old neighborhood who never made much of himself. He says little and doesn’t drink with his customers. He keeps his nose clean.

One evening, Bob hears sounds emanating from a trash can in front of a house. Inside’s a puppy, which Bob mistakes for a boxer (it’s a pit bull). The lady who owns the house, one Nadia (Noomi Rapace), helps Bob clean up the dog and then obtain food, toys, and accessories for its upkeep. In a separate (but oh-so-connected) thread, Marv and the mob are embroiled in the mystery of who jacked the bar, where the money is, why was the bar robbed, and so on.

This is a Dennis Lehane movie (he adapted the screenplay from his short story, “Animal Rescue”), but now the setting is New York instead of Boston. There’s a distinct noir feel to it, and had The Drop been a low budget, bare-bones movie, it may have been more effective of a film. There’s plenty of moral ambiguity afoot and much for the viewer to discover, too.

Gandolfini and Rapace offer award-caliber performances, although the latter isn’t given much to do other than act as a romantic foil for Bob and be someone he feels protective of — well, protective from their mutual enemy, one Eric Deeds (Matthias Schoenaerts), a mentally ill hood of some repute who not only claims to be the owner of the dog stashed in the trash but is also Nadia’s ex-boyfriend. Small world.

Some might call Hardy’s performance “restrained” or “minimalist.” And it’s true that sometimes less is more. Bob is a knowable unknowable, a man profoundly affected by the past and doomed to float through the present. He’s tougher than he appears, mentally and physically, and his taciturn nature belies the intellect of a man who is familiar with playing angles and protecting himself. Hardy’s Bob has much more in common with Bartleby’s Scrivener than Pacino’s Scarface. With a mumbled delivery and a slight shuffle-limp, Bob gives a nonthreatening appearance, sort of a slurring Roger “Verbal” Kint.

Trust is a major theme in The Drop. Nadia, an archetype for the surviving, put-upon femme fatale, is reluctant to trust Bob after her experiences with Eric. Bob, who knows more than he should, knows he can’t fully trust Marv, certain that his cousin would attempt any harebrained scheme for a possible positive payoff. Marv, a seasoned, battle-hardened loser himself, puts so little trust in others that he works on as many double and triple crosses as he can. Lots of balls in the air with this one. 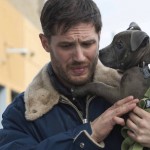 There’s more than a fair share of contrivances, too.

I found the scene in which Nadia and Bob “meet-cute” to be a little puzzling. Bob hears the dog whining from within one of Nadia’s trashcans, which are inside her chain-link fence. She comes out and, after they bring the dog inside and clean him up, she practically forces the pup on Bob, telling him he’s Bob’s responsibility. This doesn’t quite make sense and seems to be in the script solely so Nadia and Bob could have more to do with each other (bringing men and women together is one of the main purposes of puppies in movies). In another later in the movie, Nadia and Bob are walking “his” dog in the park. Nadia excuses herself for a moment, and that gives Eric Deeds the opportunity to meet Bob for the first time, complimenting him on the dog. Why does Nadia temporarily leave? Apparently because the plot required Eric and Bob to encounter each other, and nothing more.

Some viewers might see The Drop as a gritty, no-nonsense crime thriller that makes use of violence only sparingly, electing the nuance of silence over bloodletting. Others may believe that it’s a little too minimalist — when the canvas is empty, we wind up projecting what we want onto it. That is, there’s no there there; there isn’t enough in Bob’s words or action to warrant a further look, and even the reveal at the end isn’t enough to lift the movie out of its (sometimes) logically challenged doldrums. 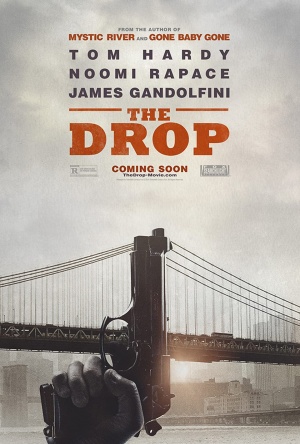