Writer/director Greta Gerwig (“Lady Bird”) puts a contemporary spin on Louisa May Alcott’s nineteenth century classic novel in Little Women, now in its eight film version. Alcott’s semi-autobiographical story about four sisters growing up in Concord, Massachusetts during and after the Civil War stands out for its warmth and celebration of family, its exquisite period costumes, and for its strong message of female empowerment, rare for its day. Unfortunately, while previous versions adhere to the sequence of events described in the novel, Gerwig takes liberties with the chronology, mixing scenes of past and present, tinkering that only serves to create confusion and undercutting what is essentially a coming-of-age drama which relies on our understanding of character growth and development.

The film begins with the March sisters as grown women. The free-thinking, independent-minded Jo March is the central character, an aspiring writer who may be a mirror for Alcott. Unlike the 1994 version which, according to one critic, “invites your attention, slowly and elegantly,” the latest iteration seems to be happening in warp speed, creating an atmosphere of high spirits and calculated energy. In the opening scene, Jo, in a heartfelt but somewhat subdued performance by Saoirse Ronan (“Mary Queen of Scots”), is living in a boarding house in New York doing odd jobs to support her family.

When Mr. Dashwood (Tracy Letts, “Ford v. Ferrari”), editor of the magazine, the “Weekly Volcano,” agrees to publish her first story, Jo tells him that she is promoting the book for a friend and wants it to be published anonymously. The editor says to tell her friend that if she wants to be a successful writer, her stories must end with the female character being married or dead, not a promising choice for some people. Jo has become fond of boarding house acquaintance Friedrich Bhaer (Louis Garrel, “Planetarium”), a language professor from France, but her inability to handle his criticism of her work causes him to disappear for most of the film. We meet Jo’s sister Amy (Florence Pugh, “Midsommar”), in Paris to study painting, accompanied by her sharp tongued Aunt March (a delightful Meryl Streep, “Florence Foster Jenkins”).

Aunt March tells her that the most important thing she can do is marry a wealthy man. Being that women at the time could not vote or hold well-paying jobs, could not own anything if they were married, even their children, this was a practical idea leading Amy to conclude that marriage was an “economic proposition.” Even so, Amy has her heart set on dilettante Theodore “Laurie” Laurence, the March’s good looking and super-wealthy next-door neighbor played by a wild-haired Timothée Chalamet (“The King”) in an earnest yet unconvincing performance. There are two other sisters in the story, Beth (Eliza Scanlan, “Babyteeth”) and Meg (Emma Watson, “Regression”) but they are peripheral characters that are not well-developed.

Meg has fallen in love with John Brooke (James Norton, “Flatliners”), Laurie’s former tutor whom she will eventually marry, while Beth, a talented pianist, is engaged in a fierce battle with scarlet fever. While Jo is the most independent of the characters, other paths are respected as well. “Just because my dreams are different from yours doesn’t mean they’re less important,” Meg tells her. While in Paris, Amy runs into Laurie and is not shy about her feelings for him but she has a consuming passion to first prove herself as an artist. “I want to be the best or nothing,” she says at one point.

Though Jo turns down’s Laurie’s pleading marriage proposal and rejects the life of being a wife and mother (Alcott never married), she later shows her vulnerability when she admits to her mother Marmee (Laura Dern, “Marriage Story”) that she is lonely. The film then flashes back seven years to Christmas in New England when the girls were teenagers, the only visible clue being that their hair is shorter. With their father (Bob Odenkirk, “The Post”) involved in the war, Marmee teaches the young women about the rewards of kindness for those less fortunate when she brings a Christmas breakfast to a family in need.

In one of the most exuberant scenes in the film, the teenage Jo engages in a wild dance with Laurie, whom she has just met at a party. When the girls are rehearsing a play, they invite Laurie to join their club and be accepted as part of the family, something he relishes. In one of the narrative’s most iconic moments, Amy, angry at her sister for not taking her to the theater with her and jealous of her friendship with Laurie, consigns Jo’s manuscripts to the flames when she is not at home.

When Jo returns she is devastated and furious but, when Amy falls into a crack in the ice and is rescued by Jo and Laurie, she is forgiving and Amy is sorry for her childish behavior. The scene emphasizes the warmth and camaraderie of the sisters, showing how a family can rise above petty grievances and provide mutual support. It is a reminder of how good Little Women could have been without the gimmickry. 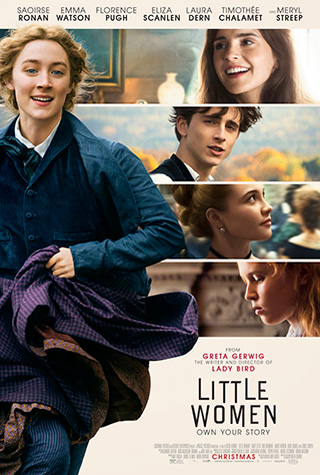