Inherit the Viper is about two brothers and one sister who run an opioid ring in the Appalachias. It stars Josh Hartnett (“The Ottoman Lieutenant”) as Kip, the oldest brother; Margarita Levieva (“Sleeping With Other People”) as Josie, the sister, and Owen Teague (“Mary”) as Boots, the little brother. Kip and Josie are the local drug dealers, camping out by the Payless drug store, buying prescription drugs from happy customers, and then selling it to whomever has the cash. It being Appalachia, hardly anyone has much cash at all, but that doesn’t stop our entrepreneurial family from getting by.

We learn that Kip is a war veteran and that young Boots has just returned to the family with a flashy car in tow, wanting to get in on the illicit action. We also learn that the siblings’ father started the family business, so to speak, some years ago and was sent to prison for it (and may even have died there) and that Boots, who was only five when his dad went upriver, still idolizes his old man, an outlook not shared by the jaded Kip and Josie. As for Josie, she’s quickly established as the coldest, most calculating of the trio, looking out for the family above all else. This is the sort of character trait that can get one into trouble in movies like this.

One major issue is that Boots really wants to be a part of things. Josie and Kip disagree on how best to address his aspirations, though; she’s all for it, wanting the extra help in dispersing and collecting, but he’s much more reluctant to involve his baby brother in a business that he knows is a bad, messy way to live.

It doesn’t help that Boots is as dumb as a muddy sock. This boy continuously makes boneheaded decisions throughout the movie, thinking less like a mature adult and more like someone’s grade-school kid who’s been allowed to tag along with the high schoolers for a change. He not only has no clue what he’s doing, he has no idea that he’s in way over his head. His motives are clear (be a bad-ass drug dealer like his daddy), and so are his intentions — which is why you can see his bad choices even before he’s had a chance to make them.

On the whole, the acting isn’t bad at all. Levieva is grimly ferocious as Josie, Hartnett earnest as Kip. I found that Hartnett, who was so great in movies like “Lucky Number Slevin,” “30 Days of Night,” and “Sin City,” looks like he’s well aware he’s slumming in this film. He seems bored, and so was I. But at least he exerted minimal effort. I’m not sure if the problem with Teague was his acting or the way his character was written, but he wasn’t amusing, he wasn’t tough, he wasn’t interesting. Kind of a shame.

In fact, the entire movie is dull and lifeless, if only because one can guess how most of the scenes play out. There aren’t many surprises in Inherit the Viper (which, incidentally, includes no snakes among its cast). In fact, even though the film runs only 90 minutes, viewers may find themselves checking their phones to see how much time might be left before the finale. Don’t hold your breath. Even the finale feels like a letdown, an anticlimactic denouement that somehow seems fitting for such a listless film. 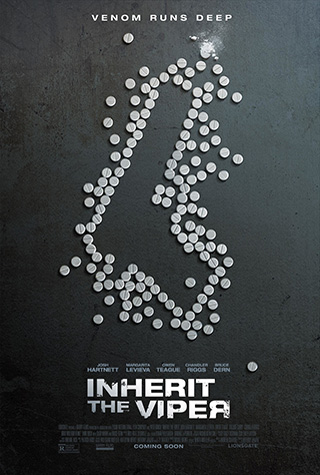