“So, where is this going?” Those are the five dreaded words every romantic relationship will wrestle with in order to figure out the identity and destiny between its two prospective lovers. Also, it just happens to be the central question behind writer-director Leslye Headland’s new romantic comedy-drama (her feature directorial debut was “Bachelorette” in 2012 and her last screenwriting credit was in 2014 for “About Last Night”), Sleeping With Other People.

Premiering at the Sundance Film Festival (aka where Hollywood stars go indie because making movies is not about making money, it’s about getting that Oscar baby!) earlier this year, Sleeping With Other People tries to examine the age-old question: Can guys and girls be best friends . . . and not have sex after losing their virginity to each other twelve years earlier? While the majority of most studies show that half of all marriages in the United States are ending in divorce, many couples who decide to not get that piece of paper can’t escape relationship troubles either. So the question that must be raised is if the relationship issues has anything to do with a seemingly old-fashioned institution or is it between the two people who initiated the love story in the first place? Headland’s film is the embodiment of this current cultural issue and it plays out like a science experiment: The film states its hypothesis and lays out its conclusion based on the different variables, observations and data that’s seen in its story.

With that in mind, you can tell when a movie has some magic in it — not just by an audience’s glowing response, but by the radiance of the standout characters on-screen. Now, there wasn’t very many standout characters, but this film does have a magnetic actress in Alison Brie (“Community” TV series and “Get Hard”), who displays fantastic range that produces a charismatic, charming, kinetic, and sweet young woman who’s trapped in a self-proclaimed love addiction. However, her always affable co-star, Jason Sudeikis (“Saturday Night Live” TV series and “Horrible Bosses 2”), is solid as a performer, but he isn’t able to show enough dramatic chops since his character’s smug personality is something we’ve seen him do on TV already.

Regardless, Brie and Sudeikis truly do have a winning chemistry that gives the viewer a delightful stroll through their world and the messy circumstances they’re in. But you can’t experience the messiness of life or romantic comedies without the expected comic relief of the supporting actors! So, fasten your seatbelts people because we get a treat with not just one, but two candidates for best scene-stealing best friend! And the nominees are . . . Natasha Lyonne (“Orange Is the New Black” TV series and “American Reunion”) as Kara, Lainey’s best friend, and Jason Mantzoukas (“The League” TV series and “Neighbors”) as Xander, Jake’s best friend. As for the winner between the two, well, it’s not even close — Xander takes the cake since he has better lines, more scenes and comedic help with the wonders of marriage and parenthood from his on-screen wife, Naomi, lightheartedly played by Andrea Savage (“Episodes” TV series and “Dinner for Schmucks”).

A film that exudes comedy and drama isn’t easy to accomplish since capturing a balanced tone is always an issue. Last year’s Sundance export, “The Skeleton Twins” (which incorporated Sudeikis’ SNL buds, Kristen Wiig and Bill Hader), handled that better despite being much heavier dramatically and more comical than this movie. But what makes Sleeping With Other People work is that it has humor anchored by the whimsical banter between each character. It’s no surprise that this story predicates itself as being a fresh romantic comedy. It’s “When Harry Met Sally…” meets “(500) Days of Summer” (except the hipster soundtrack doesn’t seem to fit in this movie).

Although, the dramatic irony between Jake and Lainey is a strong catalyst for the plot, the story loses its way when it relies on conveniences and coincidences to execute other narrative arcs. The filmmakers fail to put a new spin on the rom-com genre clichés after initially intending to. The dramatic red herrings that are manifested through the characters played by Amanda Peet (“Identity Thief”) and Adam Scott (“Step Brothers”) seem pointless when you notice their purpose in the tale and the filmmaker’s wasted opportunity for genuine suspense. Not everyone will agree with the film’s answer to the casual relationship vs. marriage debate either. For a film that appears to claim no bias toward a moral or religious agenda, its overall message signals some hope for an institution of love that will make a few viewers disappointed while others may cringe at the disorderly consequences in which Jake and Lainey face — pushing them further into an undeniable ultimatum. 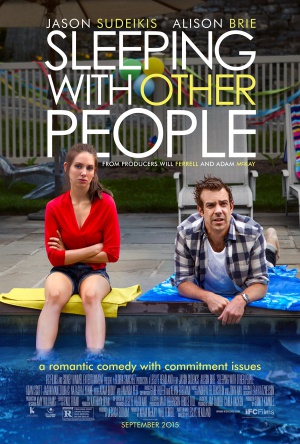