“Paranormal Activity 6” — yes, you’ve read that correctly; this is a review for the SIXTH “Paranormal Activity” movie — completes the franchise and focuses all of the action on present day, finally revealing the endgame for a demonic entity we’ve come to know as Toby. I’ve been a fan since the first “Paranormal Activity” film, and when “Paranormal Activity 2” proved it was also capable of scaring the pants off fans in packed giant theaters, I was hooked. So let me begin with this disclaimer: Yes, I’m a fan, and yes, I saw each of these movies immediately when they’ve opened. I stand by the first three as fantastic horror films that succeed where so many fail — tension. They’ve proven my assertion that there’s nothing more fun than seeing a horror film with a theater full of people, who collectively hold their breath waiting for that next scare, then laugh together after they leap out of their seats, spilling bags of popcorn. Unfortunately, as it so often happens with franchises that wear out their welcome, we’ve been left cold with more recent “Paranormal Activity” chapters, and based on its weak, underdeveloped storyline and the slim attendance in the theater when I saw the film opening night, I expect this will be the last we hear of “Paranormal Activity.”

Just as abruptly, the film jumps to 2013, and a family who’s living on the land where Katie’s and Kristi’s house burned down years ago. Ryan (Chris J. Murray, “Bad Roomies”) and his wife Emily (Brit Shaw, “Nashville” TV series) happily live here with their young daughter Leila (Ivy George) and invite Uncle Mike (Dan Gill, “The Wedding Ringer”) to come stay with them after a breakup. They’re all preparing for the holiday season and decorate their spacious house with a giant Christmas tree and Christmas lights. After Ryan discovers a large, strange camcorder in a box he thought contained lights, he begins filming everything around the house, discovering he can see strange movement hovering in the living room, in the hallway, and worst of all, in Leila’s bedroom. Ryan also finds videotapes of two young girls who appear to be able to see into the future (and Ryan’s present), and talk about the same invisible friend his daughter talks to, a being named Toby. Toby’s presence becomes increasingly malevolent, and Ryan and his family find themselves facing a frightening plot that involves the sacrifice of their little girl.

Paranormal Activity: The Ghost Dimension, as the sixth in a series of films that has definitely been around too long, strings together a few scenes from previous films, trying to show off how interconnected a franchise can truly be. Unfortunately, the plotline is very thin, with characters who are incredibly underdeveloped (I’m still not entirely sure who Skyler (Olivia Taylor Dudley, “The Barber”) actually is — a sister? A friend?) and just serve as bodies to fill the frame. There are writing credits for five different people — screenplay and story credits blended together, and it definitely shows that this is a script that went through far too many revisions. Some of the scenes are haphazardly thrown together, and the explanations for various occurrences are weak at best. The simplicity of the first two films, which expertly blended their time together and wielded tension as a weapon, is long lost in the sixth film. There’s too much happening with minimal relevance, and it dilutes the real focus of the movie — a spiritual attack on yet another young child.

However, there are still SOME positives to this film. Paranormal Activity: The Ghost Dimension is a 3D film that, surprisingly, uses the 3D very well. Granted, 3D is often a cheap way to get extra money out of moviegoers, but here, it’s blended with standard filming to create the eponymous “Ghost Dimension.” In 3D, you see, but are also immersed, in the strange occurrences Ryan and his family experience, and this becomes the film’s gimmick for jump scares (as “Paranormal Activity 3” used the oscillating fan and “Paranormal Activity 4” used a laptop’s webcam). That being said, they’re quite often very effective jump scares, at least in my opinion. Kudos also have to be given to sweet little Ivy George, whom you’ll remember from her adorable assessment of the camcorder in the trailer: “It’s-so-big!” This is one little girl who has extreme talent in throwing very unsettling looks at people she doesn’t trust, and she wields the slow, “I know something you don’t know” smirk with expert agility. She’s definitely one of the best things about this film, especially when positives are so few and far between.

Overall, Paranormal Activity: The Ghost Dimension is not a quality film by any stretch. It is, however, enjoyable enough for the price of admission, as long as you’re looking for some fun scares and entertaining visual effects. You will often find yourself wishing there was a pause button, as I did, because I’m convinced there’s something hidden in those old 1980’s camcorder glitches. The sixth (and I truly do hope, final) installment to the “Paranormal Activity” films ends with yet another terrible horror movie ending, but this is nothing new to horror fans. Judge the movie by whether or not it builds sufficient tension and keeps you anticipating the next moment your popcorn could fly from your hands. While the scares in Paranormal Activity: The Ghost Dimension aren’t as effective as the scares in the earlier chapters, it still delivers enough tension to make it worth a single viewing – but only if you’re willing to suspend your reliance on quality writing and character development. This is a movie you should see only for the 3D jump scares; its value comes in novelty alone. 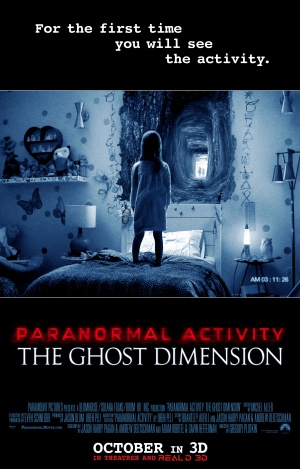