During my younger years, my mother would always tell me outlandish stories. Most of these tales involved animals spontaneously springing to life and adapting anthropomorphic qualities and inspired an overactive imagination, but one fable in particular would always scare me witless. As a superstitious woman, she’d look at me — her words marinated in conviction — and tell me about the time that she saw my grandma, who died shortly after giving birth, standing over her. But, even as a child, the details seemed sketchy: According to her, the visit came in the early morning hours and she was woken up only to see the “ghost” for a couple of seconds before it disappeared. I dismissed it as her being half-asleep and unaware to an optical illusion. Though, at the same time, whenever I heard a strange noise, I immediately thought of that story.

Oren Peli had these countless accounts of hauntings and unexplained encounters in mind when he penned and directed the original “Paranormal Activity,” which brought back the “lost-footage craze.” It played to our uncertainty over the afterlife and natural fear of the dark, earning rave reviews and boatloads of cash in the process. But, two prequels later, the same thrills have long since departed.

Set in 1988, Henry Joost and Ariel Schulman’s Paranormal Activity 3 chronicles the childhoods of Katie (Katie Featherston) and Kristi Rey (Sprague Grayden), the sisters at the crux of the first two films (younger versions of these characters are played by Chloe Csengery and Jessica Tyler Brown respectively). Here, the latter, befriends an apparition, whom she names “Toby.” Their mother Julie (Laurie Bittner) quickly dismisses it as a phase, whilst her boyfriend Dennis (Christopher Nicholas Smith) takes the initiative of setting up around-the-clock surveillance, suspecting that Kristi’s secret friend is actually an otherworldly presence and the cause of the mysterious phenomena occurring around the home. To aid in his quest for the truth, the otherwise unemployed filmmaker hires his best-friend Randy (Dustin Ingram) to sift through hours-upon-hours of over-night footage; and much like he has to endure very long waits for something to happen, the film’s audience is forced to stay awake during moments of excruciating tedium (which is only relieved by lackadaisical performances and uninspired characters).

The spirit is more violent and establishes his presence quicker this time around, but is still reduced to toying around with bedspreads, lamps, and dining room furniture. And, sometimes, the scares are false alarms intended to make the audience scream and then laugh about doing so. With that said, this third installment is the same song and dance as its predecessors. Dennis sets up his cameras in various parts of the house, Julie thinks he’s on a witch hunt, subtle creaks become slamming doors, and the couple comes to a mutual conclusion that their house is, in fact, haunted. Joost and Schulman, alongside writer Christopher B. Landon, try to add a few new elements, but, for the most part, they also believe that one act is enough to fill some of the series’ blaring plot holes. And in doing so, they smother the story arc even further. The film is also predictably cut off with a foreboding shot (that’s sure to be haphazardly addressed in another chapter).

And much like the gimmick itself, the quality of the characters has deteriorated since the series’ acclaimed debut; at this point, there seems to be no suitable replacement for Micah’s biting witticisms. Granted, Dennis is a nice guy, but as a personality, there’s not much beyond that. Julie is somewhat more likeable. She represents the rebellion of the time and she has no objections to being filmed lighting up a joint or even to making an amateur sex tape. Bittner is a charismatic female lead and, unlike her onscreen flame, she’s worth rooting for. Also notable are Csengery and Tyler Brown, simply because they aren’t as annoying as the typical Hollywood kids.

Paranormal Activity 3 has been good business for Paramount Pictures. The entire production cost around $5 million from start-to-finish, and since releasing this past Friday, it has far exceeded expectations, making almost eleven times that amount — the biggest horror opening of all time. Now, as envious of I am of their thickening wallets, I can’t blame the producers for trying to make a quick buck. It’s safe to say that the franchise has established a name for itself, becoming a surefire bet. In fact, given the current numbers, I wouldn’t be surprised if a fourth installment was given the green light (there’s already been talk that this announcement will come as early as this coming week, when the box office ballots are finalized).

But it becomes a sad testament when I can openly admit that I’ve been more scared sitting at the dentist’s office. 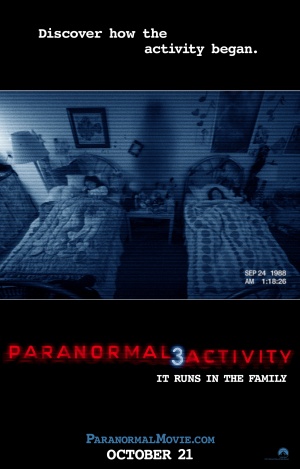