“What’s in a name?” asked Romeo in the whirling voice of William Shakespeare to a Juliet whose smell was as sweet as roses. Difficult to say what’s in it. Doubtless it is essential, whether to what the thing is, to what it turns out to be or just as our means to refer to it. It may very well be that there is no relationship between naming and fating, that a rose would smell as sweet had it been called sore or a sore would be as shitty had it been called rose. Yet such name is no coincidence, no accident of fate — happy or otherwise.

Some works ask for a fair divide between form and content, similar to the one that’s sometimes asked between a name and its referent. It is curious that the work I’m about to tackle does exactly that, mainly because it sets to explore how Malala Yousafzai’s name sealed an irretrievable bond with her personhood. Davis Guggenheim’s latest documentary, He Named Me Malala, does explore this bond to interesting depths, but it also requests from the viewer to perform a necessary split between form and content. For even though the subject of this film couldn’t be any more enlightening, its form couldn’t be any more conventional and, at points, even too indulgent.

Guggenheim is best known for having skyrocketed Al Gore to Nobel Prize stature — or to lobbying for him as he carved his way to Nobel Peacefulness, the Nirvana of high-profile Democrats, either Presidential hopefuls or candidates bereft of all hope . . . as was Gore’s case. Guggenheim’s “An Inconvenient Truth” turned out to be a very convenient vehicle for both the documentarian and his subject to tackle Global Warming while warming both their careers up. This time Guggenheim comes back to look at another Noble Peace Prize recipient, though this time it was not his film that sealed the deal. As happens with most of his works, the director spends a significant amount of effort trying to prove a point that doesn’t require too much of a case. Most of the energies of He Named Me Malala are thus invested on the Yousafzai’s household, all to show that Malala is an ordinary girl; it’s only that she was able to overcome extraordinary circumstances what separates her from the rest — no small feat.

Malala’s agenda seems to be a similar one. She wants to show that she is not anything out of the ordinary. The thing is, she is, clearly, an extraordinary person, with an extraordinary life (and she’s only 18!) and an extraordinary family and an extraordinary relationship with an extraordinary father. And all these things that are extraordinary about her are more worth of our time than all those other things that we know every teenage girl does or dream about (more or less). The thing here is that Malala’s agenda seems to come out from sheer humbleness, from her burning desire to inspire other girls, boys, men and women to follow her lead and fight for their rights. And, in such sense, this is yet another extraordinary feature in this young woman, an absolute lack of vanity wrapped in a supreme sense of self-confidence. Guggenheim, on the other hand, seems all too ready to indulge in Malala’s desires and fails to explore everything that makes this girl, this teenager, this woman (however young) an extraordinary human being. And, it is here that the documentary, as a work of art, falls short to the vividness of its subject.

Every so often a person appears on the face of the Earth and asks for a fair reassessment of our views of the world and our faith in it. They suggest that we haven’t been deserted yet by whichever force there is moving this universe around, expanding it and keeping it together, for this force can still produce, send us, give us persons like Malala. Shot when she was 15 for standing her ground as to the importance that education had for her and the right that every woman has to it, she overcame a wound that left the left side of her face permanently damaged with exemplary generosity. With the optimism of a saint, she declares that not the smallest particle in her body had ever felt angry with those who shot her. Within the rise of the Taliban regime in Pakistan, the small town in which the Yousafzais lived, Swat Valley, saw the slow changes in public policy with a small delay. This delay gave them enough time to prepare for what inevitably was coming to them.

It may be worth noting at this point that Malala’s father, Ziauddin, was an activist as well, and that he came from a long lineage of spokesmen who would always use their voice to stand for their rights and to defend those of others. An accomplished educator, he built the school in which Malala grew and thrived as a person. Since her earliest years, a classroom filled with students in front of a teacher providing them with questions became not only a second home (literally inside her home) for her, but also the physical embodiment of the good life in her eyes. Perhaps the best moments of the documentary are those in which Malala relates how she would lecture to an empty classroom, using a voice we will readily understand as she, a few years later, addresses the UN. What a pity that this scene is recreated with a little-bit-too-corny animation that actually trivializes her memories and do little justice to her voice. From the beginning of He Named Me Malala, these animated reminiscences prove a poor choice as a narrative strategy.

But coming back to the subject, the extraordinary subject, Malala and her family prove a most urgent point in quite selfish times; they prove that the affirmation of their self does not entail the negation of the other. Malala shows this again and again, with every word, every gesture, every smile and joke she makes and also within those few moments in which she speaks from her rather wounded body, as she speaks about the wounds of others. This is distinctly true when she speaks about her father, whether when she voices her fears as she was waking up from her coma of finding out that he had also been shot (and maybe successfully so) or when she talks about lighter issues, such as his stammering. For Malala, the more she ascertains her own self, the more others grow within her, and the more ready she feels to die for them if that were required — and do so with no grudge . . . and with even less drama.

he exact opposite occurs with the Taliban. As all ideologies, the end of this one is to eliminate all competition, for, as Ziauddin explains, it was an ideology that shot his daughter, not a person. Yes, this was the macro-agent behind the trigger, pulled by a self out of proportion, an isolating kind of abstraction that is willing to eradicate everything in its way if that’s what it takes to remain the same — and, of course, inevitably, that is what will take, sooner or later. It must be so, for ideologies cannot tolerate company — it’s just too high to share the peak. “Altezza non tollera vicinanza”; this was one of Giovani Papini’s mottos, loosely translatable as: Heights tolerate no proximity. And he should’ve known. In addition to being a potent poet and a terrific thinker, he was also a fascinating fascist and good friends with Mussolini — since Il Ducce was good friends with poets. Or so he said.

This kind of heights are, however, exactly the peaks that the self, by itself, will always aspire to reach, for the self, when left by itself, always tends to tyranny, to the universality of unilaterality where nothing is left — not even itself. “When you’re willing to kill yourself, others mean nothing to you,” states an exceptionally insightful Fazlullah to his lulled listeners, inevitably obliged to listen to him on the radio, all day, all night, the self-proclaimed Taliban leader, high, always high. But this quote raises a valid point, a point that counters Malala’s. While she’s ready to die for others the more she ascertains herself, the Taliban is ready to kill others the more they negate themselves. A logarithmic shift of intonation. The end of otherness means, at the same time, the suffocation of oneself. A form of murder that entails as much a path to suicide — the cause notwithstanding. Want to kill yourself? Kill everyone around you till nothing else stands. Just you. And you’re not. It is then that the abstraction, The Abstraction can emerge stripped off all bodily attachments, the bodiless manifestation of an idea, the highest possible idea, the dominant one, the alpha-geist, the only ideology that can thus rise above the nothingness it rules, will rule in a similar realm than the one that saw its birth: Forever and ever . . . eternity. And thus it ruled till the end of time.

It is true that He Named Me Malala is too timid a documentary at the face of its fearless subject, but she does stand above all narrative and technical difficulties with innermost poise. Malala’s name, as she very well puts it, will forever face her with the other who gave it to her, yet it does so without ever creating a debt. It is all a matter of gratitude. “He gave me the name ‘Malala’; he didn’t make me Malala,” she says smilingly to a camera that keeps placidly smiling to her. This is a gift she only knows how to reciprocate. She was given her name, not her fate. A word, not a sentence. A gift, not a levy. A present filled with others’ pasts, not a future poured onto one’s presents. A skin for the selves we are, not a shell from the ones we ain’t. 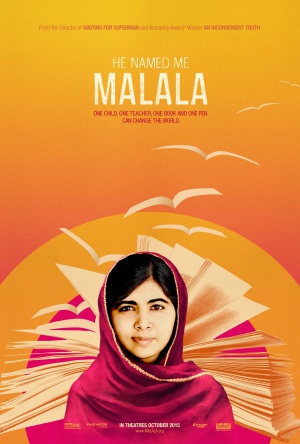