Bohemian Rhapsody certainly did not have the smoothest of beginnings, with Sacha Baron Cohen (“Borat”) — who was first slated to pick up the mantle of Freddie Mercury — leaving due to creative differences. Cohen wanted to go down a more authentic, grittier road, a road paved with rampant sex scenes and pornographic amounts of nudity, which of course wouldn’t fly with the studio and producers. They want to sell a movie as widely as possible, and their promotion of this biopic would be limited if slapped with an R-rating.

The struggles continued with Queen themselves weighing in on the direction of the biopic, which didn’t make sense to me. Pandering too much to the opinion and sway of the band would undoubtedly affect the creative output. How can you strive for any type of authenticity when you have to please the people you are portraying in your movie? With such bias on the scales, and no Mercury present to tell us what he wants, is anyone really surprised that this is where we ended up? What we have is a movie that is confused on what it wants to be. It cannot decide if it wants to explore Mercury’s private life or give us insight into the music of Queen.

In the examination of Mercury’s private life, there is a keen void of veracity. Is Mercury bisexual or homosexual? Is the movie dictating his sexuality by refusing to adhere to a narrative he offered? Though I am reluctant to lay too much blame on the filmmakers for this; it is hard to lather veracity on anything when Mercury himself was so tight-lipped about his private life. The framing and depiction of gay culture is especially damning. It is this seedy, promiscuous landscape — a lifestyle congregating in parties, drugs and sex, and nods from strange men filled with innuendo and a salacious promise. To top it all of is the villainous portrayal of Paul Prenter (Allen Leech, “The Imitation Game”), who takes the fall for encouraging and upkeeping this lifestyle for Mercury, while Mary Austin (Lucy Boynton, “Murder on the Orient Express”) is the saintly woman who brings him back from his fallen state.

For all its issues, there are shining moments to Bohemian Rhapsody, mainly in the vessel that is Rami Malek (“Twilight: Breaking Dawn Part 2”). He is a dead ringer for Mercury, with a startlingly spot-on impersonation of Mercury’s physicality and speaking voice. You only need to look to Mercury’s actual performance at Live Aid to understand the transfiguration and magic that Malek managed to conjure in his depiction of the late singer. Malek also carries the emotional weight of the film, with his large expressive eyes conveying so much of that inner agony that Mercury struggled with, agonies only glimpsed about in his songs. He does so admirably, though he is very much on his own, since the rest of the band — guitarist Brian May (Gwilym Lee, “The Last Witness”), drummer Roger Taylor (Ben Hardy, “X-Men: Apocalypse”) and bassist John Deacon (Joseph Mazzello, “The Social Network”) — are cupboard figures and Mary can seemingly do no wrong.

The concluding moments of Bohemian Rhapsody, which is the performance at Live Aid, is dazzling and unbelievably well done. While Malek struts about delivering a dynamic performance, the camera swoops in through the crowd, drawing us in. The audience in my cinema actually started to sing along, in part because we believed. In that moment, he breathed for us, he sang and danced for us — he was alive. But do I really need the film for that when I have the actual performance awaiting me on YouTube? The film squandered its opportunity to tell a story worthy of Freddie Mercury. He was magnificent and larger-than-life, and all we got is a plateful of mediocre and average. 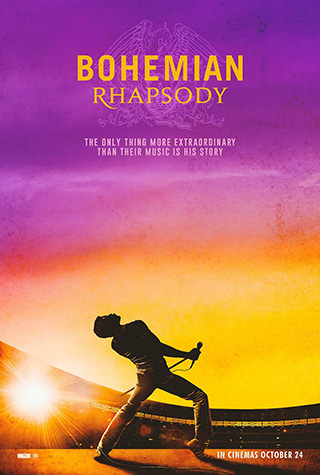