I hate warm beer. I hate it almost as much as I hate wet farts. But what I hate even more than both of those, are movies that offer nothing of worth to the viewer. They’re simply pushed out of the studio to lift a few of our hard earned dollars from our pockets. It’s what I thought about before I ventured to the theater to see The Hills Have Eyes II. It’s what I am convinced about afterwards.

Here is the plot (if you can call it that) in a nutshell. The army has begun secret testing again at Sector 16, several years after the mutilation of a family by mutants living in the underground facilities. The area, supposedly cleansed, is once again inhabited by a group of freak survivors. This is to the chagrin of a National Guard unit instructed to replenish supplies there. They’ve now got to rely on their training to survive . . .

With that out of the way, let me explain why I started my movie review the way I did. It’s mainly because The Hills Have Eyes II follows every single pathetic horror cliché imaginable. Here is a partial listing:

It doesn’t have to be this way either. Wes Craven has done better horror to his credit (see “A Nightmare on Elm Street”). Hell, he lampooned this type of shit in the classic “Scream!” I’m assuming he did this as a favor to his son, Jonathon, because he certainly doesn’t need the money (although it was said he admitted he made the original “The Hills Have Eyes Part II” solely for the money).

But guess what — I’m not done complaining. There are more facets of this movie that are bad other than the aforementioned. The Hills Have Eyes II isn’t even remotely frightening. Each scene is clearly setup to introduce the element of surprise. It’s not much of a shocker when you know when something is going to happen (or not). Also, the makeup and scenery looks like some thing put together by a fifth-grade stage production. I’ve seen more realistic and horrible deformations on a $2.00 Halloween mask. And I won’t even discuss the acting — not because I don’t want to — it’s because there isn’t any to discuss.

I’m not sure what Wes Craven was thinking when he wrote The Hills Have Eyes II. Whatever it was, I hope it was worth the very real possibility that his legacy as a filmmaker will be tarnished. This movie isn’t even worth illegally downloading to watch. It’s that bad. 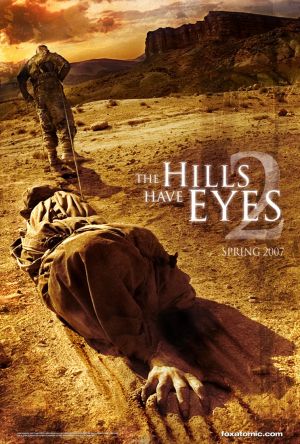