Work has been kicking my ass for the past week or so, so I hadn’t had a chance to get out to the theaters to catch anything worth my while. Today, I had a few hours to kill so I looked at the leader board and saw Disturbia was still holding a commanding lead. The decision was made for me — which is a good thing because I wouldn’t have chosen to see this of my own free will.

There is one major reason for that. Disturbia is just an updated version of “Rear Window.” And from my point of view, it is damn near impossible to top an original Alfred Hitchcock movie. The plots are nearly identical. Disturbia has a troubled boy, Kale (Shia LaBeouf), under house arrest fighting off boredom by spying on his neighbors. Along with him, his best friend Ronnie (Aaron Yoo) and his girlfriend Ashley (Sarah Roemer) become convinced one of those neighbors is a serial killer after piecing together evidence and drawing conclusions. In “Rear Window,” James Stewart, is a wheelchair bound photographer stuck in his house fighting off boredom. He takes up to photographing and ultimately spying on his neighbors and becomes convinced one of them is a killer when he witnesses a fight. Same thing — just updated for the teeny-bopper crowd of the 21st century.

Which isn’t to say Disturbia fails on its’ mission to thrill. It certainly does provide some thrills. The problem is, I found more thrills watching Kale fumble his way around trying to get into Ashley’s pants than from the idea a murderer is stalking the area. These thrills are a treat but unfortunately, it’s not enough of a treat to keep my interest focused for 100+ minutes. The only way that could have happened was if Ms. Roemer decided to bare it all — which of course she doesn’t. Mostly, the thrills meant to scare the shit out of you have been done many, many times before in much more creative ways. I was literally walking myself through the direction of the film to see if I could guess what was going to happen. Guess what? I was right 95% of the time; the 5% missed was due to statistical sampling error.

One minor plus (besides the fact that Sarah Roemer is a very attractive 23 year-old) is the performance of David Morse as Mr. Turner, the suspected serial killer of the neighborhood. His deadpan demeanor and delivery definitely made me uncomfortable. He convincingly comes across with the traits of pathological sociopath. He is charming and well spoken when he talks to the police and to Kale’s mother Julie (Carrie-Anne Moss). And of course he exhibits pure evil and disgust when he confronts his would-be accusers. It is a very good showing by Morse, whose body of work in my point of view, has been rather unimpressive.

So where do we go from here? Well, without a doubt Disturbia is geared towards the iPod generation. If you feel out of touch with this generation, you’d be better suited to watch the original movie that this was modeled after. If, on the other hand, you need a quick fix and have no interest in renting “Rear Window,” Disturbia is the movie for you. You’ll get a similar experience from both, the original just happens to be a much better movie. 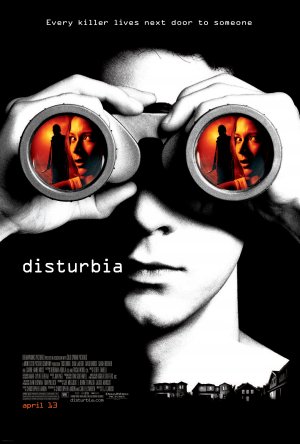