Where do I begin? I never quite know how I’m supposed to start a movie review, when I have already formed my opinion before seeing the film. Maybe I should begin by saying I’m an asshole for going to see a movie I know is going to suck terribly. Or perhaps I should start by asking what the fuck is someone thinking about when they finance a movie they know is a complete piece of shit. So take your pick, because both of those possibilities are valid beginnings to my review of Redline.

Now that the niceties are through lets get down to business. Redline is atrocious. Wait scratch that. Redline is shockingly dreadful. Wait scratch that — I can do this all day. I can’t possibly fathom what Chicago Pictures (the producers) were thinking. Let’s do a quick rundown of black flags that should have caused the plug to be pulled on this car wreck after the first day of shooting. Hell, the plug should have been pulled during the pitching.

I lied when I said I couldn’t fathom why the producers went ahead with this movie. No doubt they were hoping to make a quick buck or two. However, when a movie is this bad, it really should make it’s way through the DTV (direct to video) distribution channels. The producers of the “American Pie” franchise figured that out when they put out the pile of trash “American Pie 5: The Naked Mile” curbside. The theatrical release of Redline won’t make a dent in the 30+ million dollars it cost to make. All it did was delay any money making opportunities from DVD rentals and purchases. Anything that reduces the amount of money coming into the coffers is a very bad thing.

The lone positive of Redline is the cars. Among a few I noticed were: a Lamborghini Murcielago Roadster, a Ferrari Enzo, a Porsche Carrera GT, a Koenigsegg CCR, Ford GT, a Mercedes SLR McLaren and a Saleen S7 Twin Turbo. These a some sweet vehicles and a most welcome departure from the riceboy shit propped up by “The Fast and the Furious” franchise and “Pimp My Ride” television series.

For fans of racing Redline delivers the basics. There are plenty of races for your viewing pleasure (even though they are rather lame) and plenty of car crashes. For fans of mindless violence Redline also delivers the bare necessities. There are plenty of scenes of poorly choreographed fist fights for your enjoyment. And for fans of half naked girls — have at it. They’re littered about the film; they’re just not naked enough. If these don’t meet your extremely low entry criteria for watching a movie, congratulations — you have a fully functioning brain. 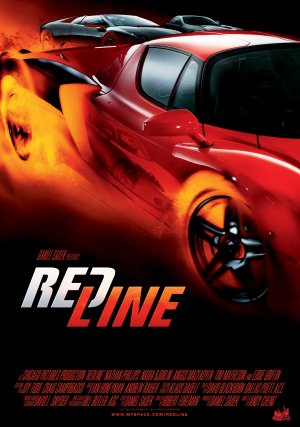