There’s no clever way to lead into this, so I’m just going to state it plainly: Collateral Beauty is a disaster in every possible way. Trying to explain why is a tall order, as I will have to disclose core plot details that were cleverly withheld from the misleading trailers. So if you consider that spoiler territory, this is your official SPOILER WARNING.

Howard (Will Smith, “Suicide Squad”) is the respected boss of a reputable New York ad agency who is still mourning the loss of his young daughter three years prior. His grief is so profound, that he is barely able to sleep, socialize, or function (unless it involves spending days meticulously assembling ridiculously complex falling-domino arrangements and walking away as they fall). Over-fixated on their own troubles and semi-concerned about Howard’s well-being, his coworkers — portrayed by Edward Norton (“Birdman”), Kate Winslet (“Steve Jobs”), and Michael Peña (“The Martian”) — discover through very illegal means that Howard is coping by personifying and writing letters to three abstract concepts: Death, Time and Love. In an effort to seize his company by proving Howard’s incompetence through video evidence, his subordinates hire three actors — portrayed by Helen Mirren (“Eye in the Sky”), Jacob Latimore (“The Maze Runner”), and Keira Knightley (“The Imitation Game”) — to portray physical manifestations of the concepts Howard writes to.

Every cast and crew member involved in this garbage must have thought so, because this movie spends almost 100 minutes (which feels like two hours) selling you on the idea that these are supposed to be compassionate characters. Sure, they may mention once every ten minutes how much Howard means to them, but they spend even more time individually meandering in their own maudlin subplots. Winslet is too career-driven to be a mom, Norton is a self-aware deadbeat dad, Peña is coughing a lot (which, in cinematic language, means he’s dying), and we’re supposed to care. Yet Howard, who is easily the most hopeless person in the movie, is more-or-less cast by the wayside in favor of his asshole friends.

When Will Smith is onscreen, though, he is trying VERY hard to save Collateral Beauty. His performance is genuine, but his interactions with Death, Time and Love (which is what hinges his entire arc) are brief, shallowly-written, and emotionally weightless. Smith’s screentime with Mirren, Latimore, and Knightley totals out to less than ten minutes, and despite what the movie tells you, their conversations feel fairly incidental. His dialog with Naomie Harris (“Moonlight”), playing the host of a group therapy session for parents who lost children, seems to hold more purpose. Unfortunately, it’s some of the more clichéd and meaningless dialogue you will hear in any movie this year. Their exchanges are wrought with hollow platitudes and generic advice, along with a very loose explanation of what “collateral beauty” is supposed to mean. This particular plotline wraps up with an implausible twist, and it is promptly followed by a SECOND, even-more-bonkers twist that renders most of what you saw before as utterly inconsequential.

Death, Time and Love’s influence on the characters in Collateral Beauty harkens back to Christmas classics like “A Christmas Carol” and “It’s a Wonderful Life,” but it never once reaches those films’ levels of poignancy. It instead comes off as self-indulgent, aiming to pull at your heartstrings, yet ends up yanking them out and tying them around your neck until you feel something, anything. The movie tells you how to feel instead of showing you why you should, and if you actually read between the lines and pay attention to what’s going on between these characters, it will have the polar opposite effect on you. As someone who has had serious bouts with depression in the past, I found the treatment of Will Smith’s character deeply upsetting. The movie is anchored around both his “close” relationships with his friends and the idea of a universal connection between everyone, but somehow everything feels disjointed. Every character arc feels underdeveloped and unfulfilled, and every attempt at uplift is misguidedly cringe-worthy.

It’s a shame that a cast with this much promise is wasted on such a collateral mess of a movie. There’s no beauty to be found here. 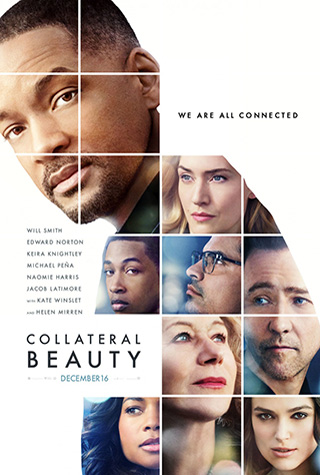