Writer-director Barry Jenkins (“Medicine for Melancholy”) delves into a power-driven coming-of-age drama detailing the tremendous angst-ridden existence of an impoverished Miami-based gay black youth struggling with self-identity and self-worth in the unflinching and revealing drama Moonlight. Convincingly raw and roughly poignant, Moonlight pushes some psychologically and emotionally charged buttons in a gritty and unforgettable narrative that continues the piercing observations of desperation and disillusionment in the dismissed and dismantled urban streets starving for a welcomed presence of hope and comforting humanity.

Indeed, Moonlight demonstrates an eerie brand of grace and dignity as it presents its absorbing case of self-infliction and one confused young man’s attempt to overcome the inner struggles of his painful ambivalence in the face of overwhelming despair and detachment. There have been countless films that tried to define the haunting existences of disorientated youths facing the detestable realities of poverty, drugs, crime and their overall curiosity about how one rises above the crippling fray to realize their elusive liberation. Jenkins’s riveting film, unlike some well-meaning but clichéd narratives, never resorts to heavy-handed manipulation or exaggeration. Instead, Jenkins oversees a quiet and observational character study that resonates in the ominous eyes of his featured tortured souls — particularly the impressionable youthful protagonist weighed down by his deteriorating surroundings and inescapable sexuality threatening to diminish his sense of self.

Moonlight is the movie adaptation based upon Tarell Alvin McCraney’s play In Moonlight Black Boys Look Blue that pinpoints the resiliency of a jeopardized child navigating his way through the numbing darkness of decadent downtown Miami during the heightened period of the crack cocaine epidemic in the Reagan-era 1980s. In chronicling the three decades of this conflicted young man who finds himself up against all odds meant to break the fragile human spirit, Jenkins suggests that the devastating backdrop to the inner city turmoil can also make the search for serenity and self-discovery a poetic path to follow to ultimate self-preservation. In essence, Moonlight is about the choppy and ugly obstacles of life that may (or in some cases may not) lead to the destination of idyllic smoothness. The fulfillment of finding one’s self-respect and reassurance is a gamble, but the payoff can be most rewarding.

At the center of the storm is 10-year old Chiron (Alex R. Hibbert), the mousy-looking kid whose life will be followed in three chapters up until his adulthood reaching the age around thirty. At this age, Chiron is the easy target for the local schoolyard bullies who feast on his insecurities and the “strange” manner in which he carries himself. In fact, the pesky hoods even give him the demeaning nickname “Little” as a reminder of his vulnerable physicality. Chiron is not only at the total mercy of the cruel punks that leave him beleaguered, but he must endure the meltdown of his working-class mother (Naomie Harris, from the recent Bond films “Skyfall” and “Spectre”) who toils as a nurse, but harbors a serious addiction to crack as well.

The remarkable revelation that Chiron sees as a combination of protection and male idolization lies in the form of local drug dealer Juan (Mahershala Ali, “The Place Beyond the Pines”) where the impressionable youngster seems to find needed solitude. Oddly, Juan does not feel the need to lure his young protégé into his drug-trafficking operation nor express an interest in getting him hooked on the junk either. Instead, Juan is a flashy fountain of encouragement and motivation that actually nurtures Chiron as a big brother/fatherly figurehead taking him on positive field trips, offering supportive advice and showing no signs of exploiting the kid beyond having him hang out at his ocean-side home along with his girlfriend Theresa (Janelle Monáe) in tow. In fact, both Juan and Theresa refuse to pass judgment on Chiron’s homosexuality and encouraged the boy to embrace his individuality as he has earned their acceptance.

The teenage version of Chiron (now played by Ashton Sanders, “Straight Outta Compton”) has now grown into a defiant and destructive force as the constant homophobic rhetoric and continual shunning has morphed into something of a whole new level in toxic cynicism. With his mother disappearing further into her drug-addled daze, the tumultuous teen’s turbulence is mildly rescued by lyrical sessions on the scenic Miami beach where the picturesque setting of silky sand, flowing warm waves and a crystal darkened blue sky seem to act as a soothing anecdote for the stressed adolescent outsider. Chiron and his classmate/boyfriend Kevin (Jharrel Jerome) allow the beach’s seducing moonlight to surrender their romantic inhibitions and, for one calming evening, gives them the permission to act upon their amorous vibes substituting for the daily hostility that binds and grinds.

As depressing and defeating the subject matter may be in Moonlight, Jenkins is masterful in soulfully illustrating the complexities, contradictions and compromises that befuddle the broken people tied together with a string of mounting tragedy. How about the drugged-up mother unable to overcome her personalized demons despite actually loving her neglected son, but feeling powerless to conquer her substance-abusing sins? What about the diabolical drug dealer who shows consideration and affection for a wounded youngster, yet sticks to his grimy guns in making sure the boy’s mother remains hooked on the poisoned powder he peddles? Jenkins’s Moonlight is a caustic juggling act that effectively works on the psyche. The mean streets of Miami as a launching pad for a corrosive existence acts as a cautionary landscape that highlights the necessity of survival and pride for one’s completeness in love and friendship.

And though the film does not explore anything profoundly in-depth that we have not experienced before in cinema, Jenkins still fuels his small, yet piercing exposition, with a cemented conviction that fortifies the serene rage and manages to instill a convincing dose of sympathy for the periled players in Miami’s hidden haven of a hellhole. Ironically, the implied beauty (courtesy of James Laxton’s breath-taking cinematography) of the film’s message is not just the explosive sunshine of the eye-popping Floridian beaches, but the determined growth and awakening of Chiron in the film’s three featured stages of finding his own truth from humble, horrific beginnings to learning to cope with uncertainty en route to resolved adulthood — a furious yet functioning life lesson for the ages. 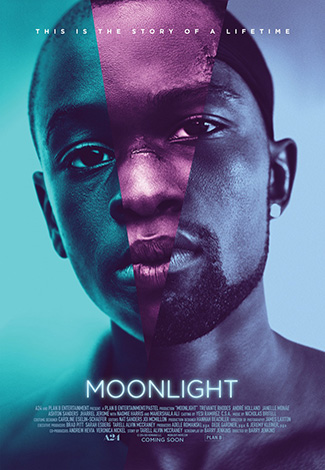