Philosophers throughout history have wrestled with the question of ends and means, right and wrong, and good or bad. Socrates said, “It is never right to do wrong.” Others maintain that it is right to act in such a way that it produces the most desirable consequences whether or not it follows society’s rules. For Dr. Romeo Aldea (Adrian Titieni, “The Fixer”), a well-respected doctor in Romanian director Cristian Mungiu’s (“Beyond the Hills”) latest film, Graduation (Bacalaureat), his goal is to do whatever it takes to secure a better future for his daughter, Eliza (Maria-Victoria Dragus, “24 Weeks”), who has been conditionally accepted for a scholarship to Cambridge University in England depending on the grades in her final exams.

As a result, his personal integrity is tested in an environment where greed, corruption, and opportunism are the norm. Romeo and his wife Magda (Lia Bugnar, “Bucharest Non Stop”) live in a small apartment in Cluj, a Transylvanian city, together with Romeo’s mother (Alexandra Davidescu) whose health is rapidly declining. Aware that he is having an affair with Sandra (Malina Manovici), a teacher at Eliza’s school who has a young boy (David Hodorog) of her own, Magda seems to be in a state of constant depression. According to Mungiu, her depression reflects the state of the country itself where people are living in a state of paranoia, dramatized as the film begins with a rock crashing through the window of Romeo’s house.

The mystery of the perpetrator’s identity soon gives way to another. Before the final exam that will determine whether or not Eliza receives a scholarship, she is assaulted and nearly raped on her way to school by an unknown assailant. Defending herself, she breaks her wrist and is forced to wear a cast on her right arm. Fearing she will be unable to properly write her exams, Romeo follows the advice of a friend in the police department (Vlad Ivanov, “Snowpiercer”), and pulls some strings with the school administrator and the town’s Vice Mayor Bulai (Petre Ciubotaru) to ensure that she receives a qualifying grade, but every compromising decision leads to another until even the tangled web he weaves even threatens the good will of his daughter.

Attempting to solve the two mysteries of who threw the rock and who assaulted Eliza, Romeo suggests to Eliza’s biker boyfriend, Marius (Rares Andrici) that he is hiding the truth about her assault, but their confrontation turns physical and only serves to escalate the problem with his daughter. Romeo clings to the idea that he is a decent person who is only trying to create a better life for someone he loves but it is clear that he has become part of the system he detests. Co-produced by the Dardenne brothers, Graduation has the Dardenne’s naturalistic look and its gritty realism, but Mungiu’s effortless subtlety and the power of his moral compass is his own.

Mungiu says that, “If you tolerate your own compromise you will tolerate the compromise around you. You will lose the moral power to speak out, because deep inside you know you have done something that is not so moral. We all complain in Romania about the level of corruption without understanding that we are responsible for it.” Though there are no consequences apparent for any of the wrongdoers, many unanswered questions are simply left hanging, and the film’s abrupt ending is less than satisfying, Graduation succeeds in exposing the favoritism, influence trading, and codes of silence that permeate Romanian society, an exposé that may just be the catalyst the country needs to rebuild a more just and ethical society. 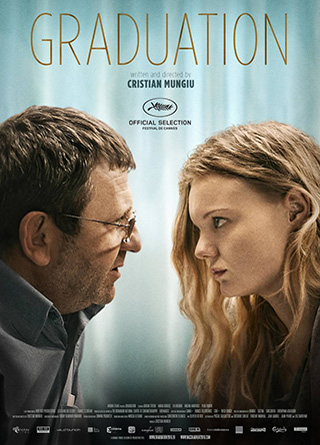