Well, the title of this action-thriller, Jack Reacher: Never Go Back, warns you to “never go back,” but when the first movie bankrolls more than $100 million, that adage seems to go right out the proverbial window. Part of the fun (although some would say “ridiculousness”) of films like “Jack Reacher” — and the James Bond and Jason Bourne franchises to a certain extent — is seeing how the protagonist escapes from a series of nearly impossible and deadly situations. We expect the hero to triumph in the end (if he didn’t, after all, he wouldn’t be a hero), but not to be able to overcome everything and everyone with barely a wrinkled shirt to show for it.

Now, in this second installment of the Jack Reacher experience, Tom Cruise (“Edge of Tomorrow”), as the mysterious former military policeman title character, Jack Reacher, does just that and has not had this much fun killing people since playing the Zen hitman in 2004’s “Collateral.”

The first go-round, was directed and written (and handpicked to do so by Tom Cruise) by Christopher McQuarrie (“Mission: Impossible – Rogue Nation”) and financed by the star himself, but with the relative success of that 2012 picture, the more seasoned Edward Zwick (“Pawn Sacrifice,” but better known for helming films such as “Blood Diamond,” and “Glory”) takes over directing the story of the brooding, guilt-ridden, almost totally indestructible anti-hero out to avenge some fuzzy wrong to atone for the sins from his past (we never see that iniquity, however).

Here in Jack Reacher: Never Go Back, at times, Cruise’s character is unbelievably immune to harm, then all at once completely vulnerable. This is never more apparent than when he suspects he may have fathered a child, Samantha, 15 years earlier (played by 19-year old Danika Yarosh, “Shameless” TV series) and when he is forced to work with a — gasp — accomplished woman in Major Susan Turner (Cobie Smulders, “The Intervention”). So much for his lone wolf image.

But fear not, there is still the obligatory shoot-outs, punch-outs, head stomps, bone snapping and chase scenes, that while clichéd, offer some zest and zing, but not as much as the first film did.

As for the villains, do not expect Robert Knepper (“The Hunger Games: Mockingjay – Part 2,” as a sexist, corrupt Army general) or Patrick Heusinger (“Frances Ha,” as a crazed, violent former special forces assassin) to equal one Werner Herzog, either. The other baddies are just fodder to be beaten and thrown out of the picture as quickly as possible. Oh, and there are at least four or five times a cell phone is planted on someone (who has no idea it has happened), in case one is interested.

And, whereas McQuarrie kept everything in “Jack Reacher” moving along smartly enough, Zwick seems to have problems with pacing and overall conviction of the character’s motivation (a former military friend needed his help in 2012, while here he is sucked into the turmoil of a woman he seemingly has never met before and a teenage girl who may or may not be his offspring). Yarosh’s character is also not the sharpest knife in the drawer, as even after her two guardians are murdered right before her eyes, she is blissfully unaware that she is in mortal danger. The plot of the U.S. Armed Forces supposedly selling surplus weapons to Iraqi insurgents (or ARE they?) and a group of para-military militiamen on the hunt is just as muddled and silly.

Meanwhile, a Halloween festival in New Orleans is more annoying than fascinating and makes the Big Easy appear more dull than it probably really is at this time of year.

In fact, the only things that save this sequel from complete condemnation is the humorous opening scene (a cracker sheriff who tries to arrest Reacher gets his) and the poignant, but short, conclusion in which the singularly angry title character lets his emotional guard down for the briefest of moments. Other than that, do not expect much at all from Jack Reacher: Never Go Back other than perhaps wishing the title maxim was held to. 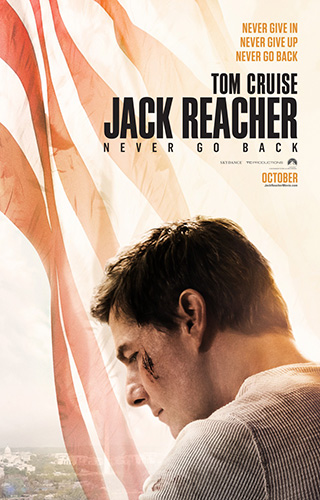