Take four couples. Add various relationship issues. Sprinkle with neuroses and being more interested in others’ problems than your own. Blend in a grand house in Savannah, Georgia. Allow to simmer for 90 minutes. Serve up The Intervention, a rather creaky if well-intentioned relationship comedy-drama. Whether the film works for you or not will depend on whether you find the four couples engaging or excruciating. Written and directed by first time helmer Clea DuVall (“Argo”), who also plays Jessie, a woman experiencing commitment issues with her girlfriend Sarah (Natasha Lyonne, “Hello, My Name Is Doris”), The Intervention could easily slip into navel-gazing pretension if these eight people were to discuss everything under the sun. Even worse, these eight twenty/thirty somethings could moan and complain about how difficult their lives are, while their privilege and wealth is all too obvious.

To her credit, DuVall avoids these pitfalls by not imbuing her characters with any wider ideas or significance. As a result, the film avoids pretension or the (melo)dramatization of first world problems. Instead, this economic film focuses on relationship issues, as each couple has its problems and all of them are more interested in the problems of others. The eponymous intervention is staged by Annie (Melanie Lynskey, “Seeking a Friend for the End of the World”), with reluctant collaboration from Jessie and Jack (Ben Schwartz, “The Walk”), to persuade miserable couple Peter (Vincent Piazza, “Jersey Boys”) and Ruby (Cobie Smulders, “Avengers: Age of Ultron”) to confront their problems and, possibly, end them.

The contrivance of the set-up is a surprising strength of the film, because the problem with contrivance is trying to hold it together. Unsurprisingly, the contrivance rapidly fails, as Annie’s attempts to force the intervention repeatedly come up against social awkwardness and embarrassment: A failed attempt to force a confrontation instead leads to a game of charades; sending Peter and Ruby off to the store to purchase barbecue supplies requires romantic dressing. The easy camaraderie of the friendships on display contrasts with the strain of keeping a brave face on things, both on the macro level of the weekend as a whole and the micro level of the individuals.

These individuals are themselves rather clichéd. Annie is the most rounded character, neurotically committed to getting things right but also plagued with a drinking problem. These traits make her in equal parts infuriating and endearing, and the viewer may want to pat Annie’s head at times and say, “Aww, sweetie,” as well as wishing she would shut up. Annie’s fiancé, Matt (Jason Ritter, “The Meddler”), is portrayed as long-suffering but rather simpering, and the couple’s frequent postponing of their nuptials prompts many barbed comments. Jessie and Sarah cannot decide to move in together, and issues arise about their sexual preferences. Jack is dating a younger woman, the free-spirited Lola (Alia Shawkat, “The Final Girls”), who is an unwelcome outsider to the rest of the group and, perhaps unsurprisingly, causes trouble. The lack of depth in some of these characters, as well as their personalities, may make them grating for some viewers. Furthermore, the social embarrassment can be in equal parts painful and tedious, although it is offset with light-hearted humor including some moments of slapstick.

The best part of the film is the reason for the intervention: Peter and Ruby. Piazza and Smulders invest their characters with a palpable sense of a foundering couple, Smulders especially expanding upon the promise of “How I Met Your Mother” and her role in the Marvel Cinematic Universe. Her performance is all the more impressive considering she is on crutches, a genuine injury that she sustained before the production and was thus worked into the film. Ruby and Peter know each other very well and clearly want to be in love, but are unmistakably and profoundly miserable. Much of their conversation consists of snapping and arguing, and at times the sadness breaks through as tears. Yet there are signs of genuine affection and it is understandable why their friends want to help, even if their actions are rather misguided. Anyone who has experienced relationship troubles may well see something familiar in Peter and Ruby, giving the film a particular resonance.

Aside from this central relationship dilemma, The Intervention is a fairly unremarkable piece of work. DuVall displays both confidence and trepidation as a first-time director, as much of the action consists of people talking in long and medium shots, the unfussy direction allowing the actors room to breathe but not to experiment. Production designer Lanie Faith Marie Overton invests the house where the action takes place with a certain sterility, in contrast to the tensions between the characters. Somewhat surprisingly given the location and subject matter, director of photography Polly Morgan does not give the film any sense of heat, which would have aided the sense of discomfort. As a result, the venue seems idyllic and the drama somewhat muted. Oppressive temperatures would have added to the tension in a manner similar to claustrophobic dramas such as “Bug” or “Carnage.” The Intervention lacks the intensity of the former and the absurdity of the latter, being a modest and unambitious affair that plays to its strengths without taking risks. While there are moments of high drama there is no sense of being trapped, and the characters are not scabrous enough to be more than mildly irritating. But that is presumably the point — we are meant to sympathize with these people rather than deride them. The film is only partially successful in this regard, but it does show promise for DuVall’s future as a writer-director.

'Movie Review: The Intervention (2016)' has no comments 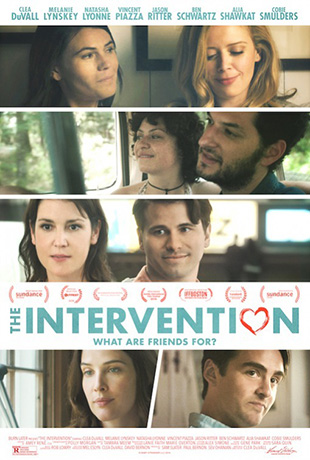