Tokens on a coffee table. Tokens on a different one. Tokens on the wall and on the shelves next to the bookcase of an old TV with VHS included. Tokens of a family life that has spanned for years, for decades, for the better part of one century. Portrayals of a timeline that starts and ends with happy moments, worth keeping instants creating periods that, when stringed together, graze upon perfection. Mementos of memorable moments. Souvenirs in the stream of life. The family portrait we were all taught to yearn adorning our later years. Tokens of a perfect family hanging out in an empty house.

This is the sequence that opens Max Rose, a recent widower who has just lost his wife of 65 years, suddenly confronted with the weight of grief, suddenly faced with the faults of secrecy. Living almost a secluded life with his wife, Max (Jerry Lewis), makes no attempt to find meaning to his solitude after Eva’s (Claire Bloom, “The King’s Speech”) departure. He’s almost stalked by his close family. On the one hand, by a granddaughter he adores (Kerry Bishé, “Grand Piano”). On the other, by a son he can’t stand (Kevin Pollak, “The Big Year”). They both wish him well — more than what Max does.

Max’s healing process is further hindered by a sudden finding as he goes through Eva’s remains, that is, her remaining stuff. He thus finds a small token given to her by a man seemingly engraved in her memory as dearly as his name is. A secret affair of which Max was previously ignorant, blissfully so. For him, his marital life was his greatest source of pride. Something went wrong with his son when this latter failed to be a good father for his daughter with his first wife. Something went wrong with his career as a pianist and composer after a recording session that went astray and a performance that led him not to touch a key in decades. Something went wrong, we know. Yet he always had a wonderful marriage with a woman with whom he aged and with whom, it seems, he loved aging. Old age brought him a joy that could only be explained by Eva’s company. Then there was Annie, that beautiful, bright young woman who was almost raised by Eva and him. And that made his life worth living. And that would have made his loss worth grieving. But there he is, alone, jealous without an object, suddenly realizing an affair that took place years and years in time. A time when he played. A time when he still had potential. A time when his brief absence during that fatidic trip to New York from which the pianist never came back opened the door for a fatidic guest in his house. That day of November, everything changed, and it only took him forty years to realize it.

This realization at the midst of complex conditions sends Max into a semi-conscious quest to meet the man who possessed the missing link amidst the tokens that made his family life. Yet it is here where I should pause on the obvious: Jerry Lewis is playing this man, coming out of his almost 20-year retirement of the big screen (his last film was the 1995 messy “Funny Bones”) to get into the skin of a man trying to make sense of the delusion he perceives his married life has become. And now, almost at 90, Lewis strikes back with a layered, beautifully written character to pay homage to a first-time director’s deceased grandfather. This is no small feat for Daniel Noah, the man behind the script and the camera this time.

And, again, I will have to pause, for I was rubbing my eyes for a short part of Max Rose, trying to understand how you take a living legend out of retirement. For those who are too young to remember and/or have been living under a rock, 700 feet deep, with no access to the outside world or to the memories that linger in the air, and would need to know who this ‘Jerry Lewis’ is, let me put it in as trendy terms as possible: He’s the Usain Bolt of comedy. No, just a second, that’s wrong, too much pandering to millennials. Rather, Usain Bolt is the Jerry Lewis of track and field. Yes, that’s better.

Jerry Lewis is the purest clown ever framed by a camera. He is even purer that his all-time idol, Stan Laurel, in the sense that he could be alone, completely alone, with pretty much nothing else than his face and a piece of sound, and he could create with it a genius routine that could go on anywhere between five minutes and five weeks. No one in film’s history, not even Chaplin or Keaton or Lloyd or Langdon, have had such a pure, innate, instinctive understanding of timing than he did. He knew rhythm the way in which birds know songs. He could get into a beat and create all sorts of variations, taking it to places no one could imagine in a matter of seconds and then bringing it back to its original place with just as much ease: His comic, cosmic rhythm. And it looked effortless. Always. No matter how many hours, how many takes, how many resources a gag would entail, by the time he got it right, it seemed as though he was performing it for the first time, almost spontaneously. He made comedy seem as easy and natural as Fred Astaire made dancing look like, almost as natural as talking — though, in Astaire’s case, dancing definitely came more naturally than talking.

So that’s, in a nutshell, Jerry Lewis (and here we’re only talking about the performer; there’s no time to get into him as a filmmaker). I know it’s impossible to do him justice in a couple of paragraphs. Though I don’t think a couple of edited volumes would do him much justice either. But just in case you were thinking: “Oh, again, a clown taking off his mask at the dusk of his life to make a serious film,” it may be good for you to go and see what he did in Martin Scorsese’s “The King of Comedy.” Lewis had already shown, a long time ago, that he was as well a hell of an actor. So he’s not here looking for validation — and how in the world could an independent, underfunded movie that was screened for the first time in 2013 in Cannes and has only had to wait for three years to be released (and very limitedly so) offer him any validation? No, it was the other way around. He validated this movie, and that’s how it got made, and that’s why it will be released. And that’s what it takes to tell a tale of old people. You know, showbiz.

But this is not new. It requires guts to make a movie about old people. You’ll likely encounter enough obstacles to see your script dying of old age. The best possible example is Leo McCarey’s masterpiece “Make Way for Tomorrow,” which didn’t make any for more films of its like and, although McCarey always considered it to be his finest film, it was as well one of the least seen and most quickly forgotten. It just accrued a small following (though always a prestigious one), and made way for producers to say that films about old people were depressing and no one wanted to pay to be saddened at a movie theater. It seems Noah’s beautifully written script got the same degree of acceptance among producers today. Old people’s films are fated to limited release (if proof needed, see what happened last year to Andrew Haigh’s excellent “45 Years,” where Charlotte Rampling’s extraordinary performance was almost exclusively seen by the people who nominated her to the Academy Award, and let’s not even go to Ira Sachs’ 2014 gem “Love is Strange,” neither of whose stellar actors got even the nod of an Oscar nomination).

Though, to be fair, Noah’s abilities as a writer are not equivalent to his chops as a director and, more importantly, as a filmic storyteller. Max Rose is a highly uneven film. Paradoxically, many of its main flaws are rhythmical, with a faltering tempo that particularly suffers during transition scenes, when Max is alone, moving from one scene (one person) to the next. Yet, in spite of its difficulties, Noah’s script still breathes and his gut is everywhere apparent.

Max Rose looks into grief by way of matter, stuff that mattered because it was shared. And then it turns and digs into those little lagoons, small exceptions that weren’t: Those tiny secrets that turn into inevitable burdens. We go from an exploration of the feeling of missing, of the feeling of stuff without, those objects commonly inhabited, commonly used, commonly meant, to those that are the very opposite of shared, stuff all to oneself. Even though a secret seems to be a single point in time we want to keep from everyone else, a point that will never make it to the coffee table, to the walls, to the shelves, the timeline of toiled perfection, those moments always surge, sooner or later. For secrets are, by that very virtue, always fascinating. Otherwise they would be soon forgotten, and therefore no secret would be left to keep.

Here, however, it is Lewis’ titanic presence that makes us feel the way he feels for every piece in the splendid ensemble that is the cast. Annie is truly the kind of grandchild we all would like to have. Christopher comes across as the dull son we would find it hard to relate with. And on and on it goes. So if it is true that Noah does veer towards sentimentality, he never does so overtly. That keeps his film from being manipulative. It is certainly an impulsive film. That sometimes helps, but often harms, particularly at points of emotional complexity loaded with layered contradictions. The weak grasp we get about the conflicted father-son relationship between Max and Christopher is definitely one of those instances. The encounter between Max and Eve’s lover (an always assuring Dean Stockwell, “Deep in the Darkness”) makes, however, for one of those points where impulses get the best out of everybody.

All in all, Max Rose is a little tale and little more. That’s what makes it worth watching. It is simple in what it says, in what it does, in what it delivers — just as Lewis’ comedy. Nothing but a little tale of a little man confronted by the puzzle that grief is. A man afraid of losing what he has left, which is, at the moment we meet him, the memory he keeps of her. A man who cannot get himself into the bedroom at the end of the hall, the one he shared with his very love, fearing her absence because he can still feel her presence, afraid he’ll only find a piece of light on her side of the bed, a bit of lightened air in her stead. And maybe that’s all there is. That light, you know. Maybe it emanates from the memories we conserve of those we very much loved. Or maybe not. Maybe no one turned it off and no one shut the door. What do I know? And then again, you know, who does? 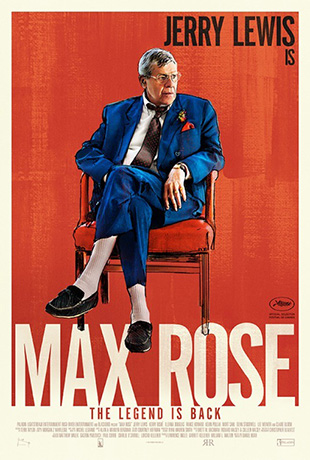