William Shakespeare wrote (Sonnet 116), “Love is not love which alters when it alteration finds, or bends with the remover to remove: O, no! It is an ever-fixed mark that looks on tempests and is never shaken.” Though Shakespeare would not admit impediments to the marriage of true minds, Kate and Geoff Mercer in Andrew Haigh’s (“Weekend”) 45 Years find that their marriage may be on shakier grounds than they thought when a letter arrives in the mail causing them to question the truth of their relationship. Winners of the Silver Berlin Bear at the 2015 Berlinale, Charlotte Rampling (“Melancholia”) and Tom Courtenay (“The Golden Compass”) deliver remarkably enduring performances as the childless couple looking forward to the celebration of their 45th wedding anniversary until it is upstaged by an unwanted reminder of the past.

Based on David Constantine’s short story In Another Country, the film is set in the flatlands of Eastern England and takes place in the course of one week, delineated by intertitles. It is restrained and subtle yet manages to convey deep emotional hurt without shouting matches or theatrics. The couple, now in their declining years, live a comfortable life close to the town of Norwich, famous for Julian of Norwich, a 14th-century mystic and author of the first published book in the English language written by a woman. Most days consist of mundane events such as Kate taking the dog Max for walks in the countryside, both going into town to do some shopping, or joining friends on a riverboat excursion.

Their world is turned upside down, however, when only one week before their anniversary, Geoff receives a letter telling him that the body of Katia, his first love, has been discovered, preserved under the ice on a Swiss mountain where she died in an accident fifty years ago. Although this happened before Geoff and Kate met, the letter leaves them both shaken. Outwardly oblivious to the harm the revelation has caused, his actions show that it has affected him deeply. He resorts to smoking again after many years, looks in the attic for old photos of Katia, thinks of going to Switzerland to identify the body, and wanders aimlessly in the town.

When Kate finds out that Geoff is officially listed as Katia’s next of kin and uncovers a very revealing photo of Katia from the past, she begins to question whether or not their relationship was based on a lie. Although the film is told from Kate’s point of view, Haigh refuses to comment on the rightness or wrongness of the circumstances and does not question the way in which the characters react, content to observe rather than judge. Geoff and Kate go through the motions of planning for the party as if nothing has happened, but there is the ever present elephant in the room. Rampling’s facial expressions, even when she is attempting to hide her feelings, reveal deep-seated weariness and pain.

There are no heroes or villains in the film. Shot with loving attention to the silent vistas of the English countryside, 45 Years conveys a sense of isolation, of two people being together yet growing apart, a dream that has been shattered, and a lifetime of security undermined by a moment of doubt. It is a thorny subject but beautifully told with gentleness and love. 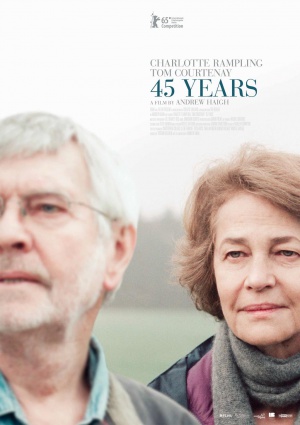