Like the infamous Roach Motel, once you check into Hotel Transylvania 2, you don’t check out. At least your brain doesn’t check back in until the concluding credits roll after its 90ish minute running time. Getting back together with former SNL writer (and creator of the often-hilarious cartoon parodies, “TV Funhouse”) Robert Smigel, Adam Sandler (who shocked summer audiences with the universally-panned “Pixels”) goes for a second chapter to 2012’s “Hotel Transylvania,” although few people were clamoring for it. Here, Sandler culls together his Usual Gang of Idiots, Kevin James (“Paul Blart: Mall Cop 2”), Steve Buscemi (“The Incredible Burt Wonderstone”), David Spade (“Grown Ups”) and Jon Lovitz (“The Benchwarmers”), along with those more talented than inclusion in this picture calls for, including Andy Samberg (“I Love You, Man”), Molly Shannon (“Me and Earl and the Dying Girl”), Nick Offerman (“Danny Collins”) and Mel Brooks, among others.

It is also directed by Genndy Tartakovsky who is responsible for some of the better animated kids shows of recent years such as “Dexter’s Laboratory,” “The Powerpuff Girls” and “Samurai Jack.” He doesn’t fare so well on the big screen, however.

At least the first one had some originality with Sandler as Count Dracula living in a world of monsters and mutations whose daughter, Mavis (Selena Gomez, “Getaway”), is dating a human goofball, Jonathan (Samberg). The message there was that humans hate and fear monsters and the union of Mavis and Jonathan was therefore akin to William Shatner kissing Nichelle Nichols in 1966. After all of that, we begin this lazy, uninspired sequel with the two kids’ wedding (complete with the usual fish out of water in-laws who are frightened by all of the characters on the bride’s side of the church — for more details on this, just watch ANY episode of “The Munsters” or “The Addams Family”).

Shortly thereafter, baby Dennis appears (why “Dennis” is anyone’s guess), and Dracula couldn’t be happier. The problem is that Dennis is slow to exhibit his inhuman tendencies, which makes Drac worried that his monster genes may not have been passed on and his grandson may just be another dull human. So, while Jonathan takes Mavis to visit his parents (Offerman and his real-life spouse, Megan Mullally, “What to Expect When You’re Expecting”) in Santa Cruz, California, Drac seeks to teach Dennis — who has aged five years in about five minutes — the benefits of being a monster and hoping his canine fangs soon sprout. Various scenes of him forcing the more docile members of his posse, Frankenstein (James), the Wolfman (Buscemi), the Invisible Man (Spade) and the Mummy (Keegan-Michael Key, “Vacation”) to scare people, kill animals and eventually fly soon follow. It all leads to confusion, pratfalls, silliness, but few laughs (VERY few laughs).

Later, the parents return and the group is confronted by a group of terrifying (for the younger set, anyway) gargoyles (or something like that) who appear for really no reason at all. Oh, and there’s also a subplot about Dracula’s father, Vlad (Brooks), not being able to accept humans — ho hum. Does Dennis’ fangs grow in, will he stay in Transylvania or move to SoCal? Will Vlad and Drac finally get along? Do we care at all about any of these questions?

While an occasional pun is tossed to the adults in the audience (with the usual potty humor included), this effort will mostly be appreciated by the little ones, especially those under eight who may have forgotten the much better recent animated films such as “Inside Out,” “Minions” and “Shaun the Sheep.” For us adults, though, who remember what how frightening the real Universal monsters were, this is brain dead stupidity at its best and just a plain waste of time at its worst. 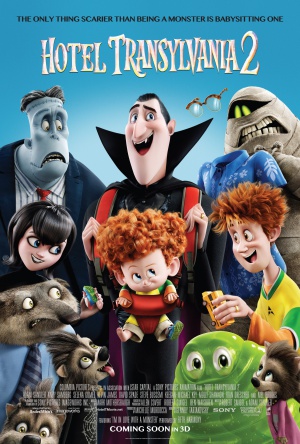