What to Expect When You’re Expecting. It’s “New Year’s Eve” in the neo-natal unit; “Valentine’s Day” with a uterus; “Knocked Up” times five. Unfortunately, that’s about the best I can about this film featuring the ups and downs of having a baby.

In an attempt to jump on the multi-story, large cast bandwagon, director Kirk Jones (the charming “Waking Ned Devine,” the horrid “Nanny McPhee”) — with the assistance of writers Shauna Cross and Heather Hach (“Freaky Friday”) — give us a few sparkling comedic moments, only to ruin it all with depressing dramatic letdowns and cinema’s most predictable conclusion.

Then again, some of the heavier scenes are actually more (unintentionally) hilarious than the lighter ones. And while there is nothing unusual about comedies with dramatic overtones, What to Expect When You’re Expecting is all over the map, going from pure joy in some sequences to outright horror and heartbreaking grief in the next one.

Like “Hamlet,” the movie suffers from an inability to make up its mind. 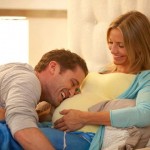 One would mostly be wrong, however.

Plot has five Atlanta couples, all of whom are in various stages of pregnancy and/or child expectations and have somehow connected with each other (no matter how far-fetched their situations are). Evan (Matthew Morrison, “Glee” TV series) and Jules (Diaz) hooked up while involved on the show, “Celebrity Dance Factor,” (she throws up on live television after the final episode), and now constantly bicker about whether or not to circumcise the baby; Ad man Alex (Rodrigo Santoro, “Post Grad”) and professional photographer Holly (Lopez) are looking to adopt an Ethiopian newborn; Gary (Falcone) and Wendy (Banks) are now expecting after years of trying, but also discover that Gary’s neglectful, NASCAR driver father, Ramsey (Quaid) and his young wife Skyler (Decker) are going to have twins (the sad-sacked, whining son is one-upped by the old man – again); and Marco (Chace Crawford, “Gossip Girl” TV series) and Rosie (Kendrick) work in competitive food trucks, have a one-night stand and are now “overjoyed” with the outcome.

Most of the yuks here are from Wendy, who wanted “the glow” of pregnancy, but discovers the aches, pains and uncontrollable bodily functions are paramount (her “mother-in-law,” however, seems to have no trouble, at all). A few more — rather uncomfortable — laughs are solicited from Janice (Wilson), Wendy’s idiot assistant (who honesty gets more snickers from her weight than her jokes, sad to say).

The movie’s worst crime, though, is Alex’s association with a group of depressing new dads, including Rock, Huebel and Lennon, who meet at a park each day and spout unwanted and unnecessary advice to him about being a father. Few of these scenes are funny and a running gag of one of the men’s children tripping, falling and being hit in the head with full beer cans, is simply dreadful.

All combined results in a herky-jerky, mostly unfunny film which lacks a fluid, coherent story. What to Expect When You’re Expecting had promise (it is based off an incredibly popular book by Heidi Murkoff of the same name), but, at best, it is now relegated to inducing labor pains for its 110-minute running time — even for the nonpregnant in the audience.

'Movie Review: What to Expect When You’re Expecting (2012)' have 9 comments 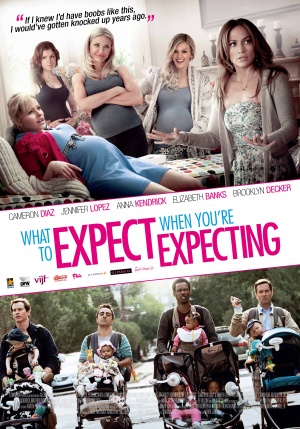