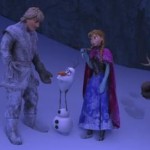 In a world of ice, Disney finds great warmth. It’s the sort of cutesy irony that sounds like it should be coated in sugar, but with Frozen, Disney takes the sweet concept and transforms it into their most poignant and powerful picture in over a decade. Or nearly even two decades if you consider that the Mouse House hasn’t unleashed such gorgeous tunes and such engaging storytelling since the mid-90s portion of their beloved Renaissance period. That’s tall praise from a Disney fan, perhaps, but Frozen is the kind of whip-smart and emotionally enchanting picture that inspires such crazed, buzzing enthusiasm.

As much a tribute to the hallowed history of Disney princesses as it is a modern revision of Disney’s classic love story, Frozen conjures that special brand of studio magic and applies it to a terrific tale of sisterhood. Elsa (voiced by Idina Menzel), the young heir to the throne of a quaint Scandanavian kingdom, has the power to shoot blasts of ice from her fingertips, something that delights her little sister Anna (voiced by Kristen Bell). It’s a fun power for play, but Elsa cannot control it and so her abilities are more threat than thrill. In order to protect Anna, Elsa locks herself away in her room for years and painfully — though importantly — severs her relationship with her sister.

Based loosely on Hans Christian Andersen’s The Snow Queen, Frozen is about what happens when Elsa comes out of hiding and the two sisters have to interact with years of hurt and loneliness between them. This personal, dedicated conflict is delicately delivered with honest heartache and a refreshing maturity. Anna and Elsa are both partially responsible for this predicament, but they’re also victims of a dangerous power they don’t yet understand. This isn’t some contrived sibling rivalry, but an emotionally enriching spin on the philosophy that love conquers all, even when solitary isolation seems to be the only route to survival.

Anna and Elsa are trapped in a destructive maelstrom of magic and the story asks that Anna bravely trust her sister, reach out to her in order to help, while the conflict dictates that these sisters barely know each other, hardly have anything that connects them beyond the blood that runs cold in one of them. Metaphorically, thematically, dramatically, this is the most sophisticated and roundly artistic animated effort Disney has made in ages.

Both sisters have genuinely rewarding and intertwined arcs, so while Anna remains the protagonist throughout, Elsa is a key part of her sister’s growth and has her own challenges to face as well. She’s a queen and eventually an unintentional villainess, a twist of roles that respectfully references Disney’s earliest work with princess narratives, but she’s not beyond saving, not beyond love. She embraces isolation because it’s all she knows, but instead of taking this assumed fate lying down, she approaches it with a proud courage, a damn-it-all attitude that is revealed in her show-stopping number “Let It Go,” which lifts the onscreen emotions to the rafters as the animators match Elsa’s creativity by crafting a wondrous ice palace before our very eyes.

Much of the perfectly paced plot focuses on Anna, though, who is convinced that she is the only one who can help Elsa. Anna has a habit of impulsively leaping into a situation and underestimating the surrounding dangers, but Bell fills the character with such feisty, feminine smarts that we know she’s capable of making the right decision and that her headstrong stubbornness is a virtue instead of a fault. She first meets handsome Hans (voiced by Santino Fontana) and later recruits the gruff Kristoff (voiced by Jonathan Groff) on her journey to find her recently self-exiled sister. Kristoff comes with a sidekick, a friendly, carrot-chomping reindeer named Sven whose only voice is provided by Kristoff’s ventriloquist act.

Together, the group meets Olaf (voiced by Josh Gad), an obliviously optimistic snowman given life thanks to Elsa’s magic. These new additions provide plenty of comic relief and rather amazingly, the comedy sticks. Olaf is a goofy looking fellow, but Gad gives him a soft, friendly personality that is immediately infectious. He can’t help but look on the bright side of everything and his attempts to be friends with absolutely everyone are so charmingly innocent that it’s easy to enjoy the little guy’s presence. Olaf even gets his own song, all about how much he craves summer and time in the sun, unaware of that pesky melting problem caused by heat. 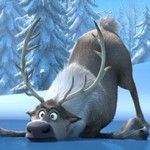 Each character is memorable and engaging, an accomplishment that has eluded Disney’s animated pictures for a very long time (entertaining, contributing sidekicks are a rarity on their own as well). There’s so much going on here, but Frozen remains focused at all times, never straying arbitrarily or letting any of the many pieces become a distraction. It’s an astonishing juggling act, so when the story introduces that classically nostalgic princess trope, the true love’s kiss, it’s forgivable in the context of something so impressive.

But screenwriter Jennifer Lee, who co-directed with Chris Buck, is actually in the midst of orchestrating her most beautiful feat yet. Where Frozen leads is a place of such moving grace and imagination that the movie simultaneously adds to the princess canon with tremendous originality and updates the concept of Disney heroines seeking love with a verve and vibrancy that is immensely inspiring. So, I gush. From the carefully conceived visuals to Christophe Beck’s wonderful score to the glorious songs courtesy of Kristen Anderson-Lopez and Robert Lopez, Frozen is a genuine triumph. It’s overwhelming at times, witnessing such a remarkable return to form for the studio. Defrosting has never been so tender. Anna and Elsa haven’t just warmed my heart; they’ve set it aflame. 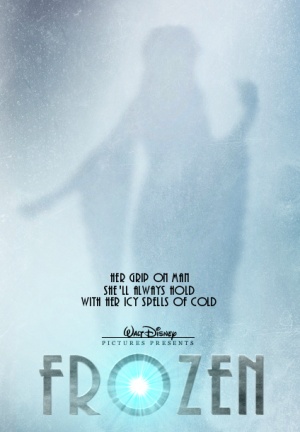