The question wasn’t why it took so long to make Paul Blart: Mall Cop 2, the unanticipated sequel to 2009’s “Paul Blart: Mall Cop,” as much as why waste the time, money and effort to make one at all. The original was a mediocre comedy at best and at worst was the indirect inspiration for one the most horrendous films of the decade, “Observe and Report.”

Now, six years later (and possibly 50 pounds added to the title character played by Kevin James, numerous and forgettable comedies like “Grown Ups” and “I Now Pronounce You Chuck & Larry”), the lovable loser Blart has gone through a series of cataclysmic setbacks in his life. Amy, his girlfriend from the first film (played by a most intelligent Jayma Mays — in that she is not in this one) divorces him six days after their nuptials and his mother (Academy Award nominee Shirley Knight) is hit by a milk truck — and this is the highlight of the comedy here, friends.

But every dark cloud has a silver lining and on the same day his daughter, Maya (Raini Rodriguez), is accepted into UCLA, an even less important subplot is revealed: Paul is invited to the Security Officers Convention in Las Vegas where he is led to believe he is giving the keynote speech.

Obviously, he isn’t and most of the other people at the event such as fellow guards Saul Gundermutt (Gary Valentine, “Zookeeper”), Donna Ericone (Loni Love, a regular in “Ned’s Declassified School Survival Guide” TV series) and Khan Mubi (Shelly Desai, “Here Comes the Boom”), among others, seem to dislike him as much as the audience does.

It’s not difficult to see why, though. Blart is now easily one of the screen’s most annoying and unlikable characters. In Paul Blart: Mall Cop 2, he attempts to shame his college-age daughter into not enjoying herself in Vegas, bugs the living hell out of everyone he meets, destroys a Segway, loses a fight to a peacock, humiliates himself during a Cirque du Soleil production and gets into extremely unfunny pratfalls that would make Jerry Lewis, Chevy Chase and the Three Stooges cringe in embarrassment.

Meanwhile, the very hotel in which Blart is staying is being robbed of its art treasures by the always sinister Neal McDonough (“RED 2”) and his gaggle of incompetent henchmen. Then, when Maya and her lame bellhop boyfriend (David Henrie, “Grown Ups 2”) are kidnapped, Blart goes into action (which of course means a series of incredibly fortunate events to subdue the baddies with various non-lethal weapons are to occur).

But hey, you know there’s trouble ahead when the credits of a film one is watching reads “Written by Kevin James” or “Produced by Adam Sandler.” The masterstroke of Paul Blart: Mall Cop 2 is that we do not find out about this until AFTER the movie ends.

With no plot, no story, no direction (from Andy Fickman, director of equally bad comedies like “Parental Guidance” and “You Again”), no acting to speak of, no special effects and certainly no laughs within its entire 94-minute running, it would behoove potential viewers to save their money, skip Paul Blart: Mall Cop 2 and just watch a real mall cop go about their business for an hour-and-a-half.

It would be much funnier and certainly much more interesting. Guaranteed. 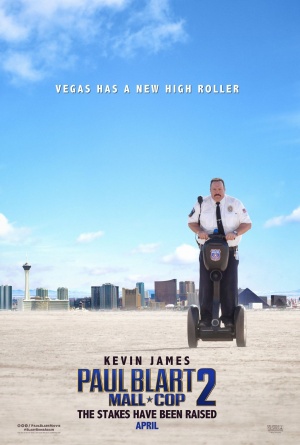