Leave to Adam Sandler and his Happy Madison Productions production company to find another ridiculous premise to bring to the cinema. Instead of a retarded football player (“The Waterboy”), a freaky little man-whore (“Deuce Bigalow: European Gigolo”) or a morally corrupt child actor (“Dickie Roberts: Former Child Star”) we get male fire fighters pretending to be gay in I Now Pronounce You Chuck and Larry.

I’d have to say it is good to get Sandler back to his roots. His latest string of parts had him trying like hell to be a dramatic leading man — something he’s had very limited success with. In I Now Pronounce You Chuck and Larry, he plays Chuck Levine — a 100% heterosexual man; the composite ladies man of the local firehouse. His partner in the department is Larry Valentine (Kevin James), a widower raising two children.

The story starts when Larry realizes that if he dies, his children will not be taken care of. The only way to ensure that doesn’t happen, is for him to elect a new beneficiary. Unfortunately, his policy holder won’t let him change the forms so he’s forced to figure out a work around. Enter Chuck. After having his life saved by Larry in the past, Chuck makes it clear that he’ll do anything to repay the favor (big mistake). That’s because the favor Larry asks him to do is to marry him. It turns out the state of New York recognizes civil unions and if he were to remarry his policy can be changed. Reluctantly, Chuck agrees. Of course, the union is scrutinized by the city . . .

It’s under this scrutiny that I Now Pronounce You Chuck and Larry finds it’s footing. Instead of just being a movie full of faggot jokes (there is a lot), homos running around in leather chaps with the ass cut out (there are a few questionable outfits) or the assholedness of the religious right (a climatic scene), the movie actually tries to bring to light the uphill battle gay people have been fighting. Whether you agree with their choices or not, the fact that the movie tries to at least showcase them, in a less than dramatic (and boring) way, is admirable. No one likes to be preached to — especially me. Movies are meant to entertain but there is nothing wrong with being enlightened along the way.

And entertain, I Now Pronounce You Chuck and Larry mostly does. Like I said before, there are plenty of gay stereotypes and jokes portrayed. Some of them hit the mark and some of them fall flat. There a lot of slow points. What was entertaining was the chemistry between Sandler and James. Sandler thinks he is the mans-man and that James is the feminine one. Everyone else sees it otherwise and watching how it affects them is rather funny. And while Sandler isn’t necessarily the best leading man, Kevin James is more than capable of making them both look good (another great performance was in “Hitch”).

But these two guys aren’t the best actors of the movie — not by a long shot. That honor goes to Ving Rhames (“Mission: Impossible III”). He plays a fellow firefighter Duncan and although he doesn’t have the biggest part in the movie, the ones he is in he steals. Watching him sing and dance in the shower had me gasping for breath. And how can this movie review be complete without mentioning Jessica Biel? She plays lawyer Alex McDonough and the love interest of the now gay Chuck. She has come a long, long way from her start in “7th Heaven.” Hands down she is the hottest piece of ass in show business today. I’d cut off my right hand just to sniff her ass. Halle Berry move over, Jessica makes you look like shit in that Catwoman costume (I suddenly find myself wishing I was a litterbox).

The question remains, would I recommend seeing I Now Pronounce You Chuck and Larry? It does offer a few moments of comedic genius, but overall it lacks the left hook needed for a knockout. On the other hand, shooting Jessica Biel in her panties is a master stroke. From a simple mans perspective (like mine), go to YouTube and see the best parts of the movie for free. For everyone else you’ll need to ask yourself if dumbed-down fag humor (even if it has good intentions) is worth the price of a movie ticket.

'Movie Review: I Now Pronounce You Chuck and Larry (2007)' have 6 comments 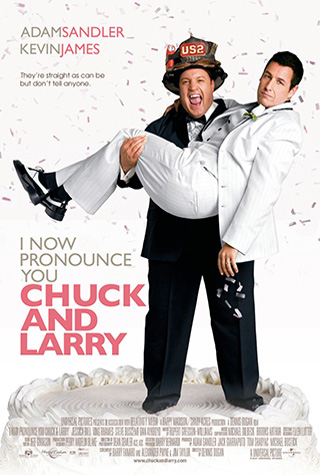