On May 13, 1917, three children, 10-year-old Lúcia (Stephanie Gil, “Terminator: Dark Fate”) and her younger cousins Francisco (Jorge Lamelas) and Jacinta (Alejandra Howard, “Cleo” TV series) were tending their family’s flock of sheep at the Cova da Iria, the family pastureland in the Portuguese village of Aljustrel on the outskirts of Fátima, when they had a striking vision of a Lady (Joana Ribiero, “The Man Who Killed Don Quixote”) dressed in white near a small oak tree. Claiming that she came from heaven, she asks the children to return to the same place on the thirteenth day of each month for the next five months, promising that a miracle would be performed that will convince the people of the village of her appearance and receive her message of peace. She also gives the children personal messages that could only be revealed later.

Written by Barbara Nicolosi, Valerio D’Annunzio and Marco Pontecorvo and taken from Lúcia’s memoirs, Fatima, directed by Pontecorvo (“Partly Cloudy with Sunny Spells”), son of director Gillo Pontecorvo (“The Battle of Algiers”), peeks beyond the boundaries of the known in his retelling of the fact-based 1917 sighting of the Lady identified as the Virgin Mary, first brought to the screen in 1952 in “The Miracle of Our Lady of Fatima.” The present story is told from the point of view of the three young children, especially that of Lúcia who bears the main task of convincing the community of the authenticity of her visions.

The film is book-ended by a fictional conversation held at the Carmelite convent in Coimbra, Portugal in 1989 between a now elderly Sister Lúcia (Sônia Braga, “Bacurau”) and Professor Nichols (Harvey Keitel, “The Irishman”), a skeptical Professor of Religion. Though the flashbacks attempt to put the visions in a modern day context, the experience of the children unfolds in real time and they deliver performances that are real and beautifully realized, especially that of Gil whose beatific smile is enough to convince us of her divine revelation. According to Pontecorvo, “Lúcia, for me, is . . . someone that can see beyond and can get in touch with another level in a way that not all of us have the possibility of doing.”

Unlike many Hollywood films in which spiritual events are artificially enhanced by CGI effects and heavenly sounding music to create a “spiritual feeling,” Pontecorvo’s depiction of the Lady is of a real woman who walks barefoot on the mud, not a fuzzy image floating in the air. Filmed entirely in Portugal by cinematographer Vincenzo Carpineta (“Let’s Talk”), Fatima creates a striking sense of place and time. It is the time of World War I and a weary world prays for peace. The villagers gather daily in the town square to listen as mayor Artur Santos (Goran Visnjic, “The Girl with the Dragon Tattoo”) reads the names of local soldiers who have been declared dead or missing. Lúcia’s family hopefully await news from the front about Lúcia’s brother Manuel (Elmano Sancho, “The Black Book”). People struggling with the loss of a loved one receive little comfort, however, from a hardline anti-clerical government.

As Lúcia struggles to overcome the disbelief of her mother, Maria Rosa (Lúcia Moniz, “Hero on the Front”) and her father Antonio (Marco D’Almeida, “Night Train to Lisbon”), she must also deal with the outright hostility of the mayor, the local pastor Father Ferreira (Joaquim de Almeida, “The Hitman’s Bodyguard”), and the bishop (João D’Ávila, “The Easy Way”). During one of Mary’s visits at Fátima, the children experience a vision of Hell with all its accompanying charms such as an ocean of fire, devils, and shrieking souls, but the Lady tells them that her visit was a way of saving the tormented souls in Hell. Despite the children’s belief in what they had seen, they are pressured by her parents, the church, and the secular officials to recant and admit their story was just a made-up game.

On October 13th, however, a perceived miracle took place before an estimated 50,000 people who testified that the midday sun suddenly appeared like a silver disk, then began “to rotate, dance, and whirl like a pinwheel.” Wobbling across the sky, it plunged towards the earth as people screamed and looked for a place to hide and then sighed in relief and amazement as the sun re-ascended towards its rightful position in the sky. Today, the basilica of Our Lady of Fatima stands near the Cova da Iria as the Lady requested and draws thousands of visitors each year. In 2017 Pope Francis canonized Francisco and Jacinta, both of whom died in the flu epidemic of 1918, while Lúcia’s canonization is still pending.

Fatima is a lovely film that, unlike previous versions of the story, explores the inner life of the characters and portrays the Marian visits without being preachy. What the visions represent is beyond the scope of this review, yet, as Anne Baring says in her book, “The Dream of the Cosmos,” “the passionate longing of the human heart has always been to press beyond the boundaries of the known, to break through the limitations of our understanding, to extend the horizon of awareness.”

Marian apparitions as well as other visions of the “Divine Feminine,” according to a Newsweek magazine article in 1997 article, have numbered at least four hundred in the twentieth century alone and have been reported from antiquity down into modern times at times appearing as Isis, Kali, Durga, and Ishtar as well as the Virgin Mary. Fatima challenges our normal consensus view of reality and strives to evoke in us a renewed sense of mystery regardless of our religious or secular beliefs. Allowing us to see the world through a broader lens, it points us towards a new connection with the cosmos. 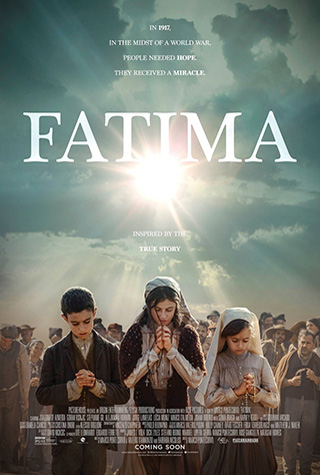