The Man Who Killed Don Quixote is a film three decades in the making, and it is not shy about highlighting this fact to the viewer. Beginning with a caption that informs the viewer of the length of time it took to bring this adaptation of Miguel de Cervantes’ novel to the big screen, The Man Who Killed Don Quixote is a famous (or infamous) passion project for Terry Gilliam. After a prolonged sojourn in development hell, and a disastrous initial production that was documented in the feature making-of “Lost in La Mancha” released in its own right in 2002, Gilliam’s film finally struggles onto screen with all the determination of a laden — but patient — donkey.

Purist fans of the novel may be outraged, because The Man Who Killed Don Quixote is more “The Man Who Filmed Don Quixote.” Opening with the loony knight Quixote (José Luis Ferrer, “Thirteen Chimes”) and his faithful squire Sancho (played by Gilliam lookalike Ismael Fritschi, “[REC] 4: Apocalypse”) attacking a “giant” (actually a windmill), the illusion is rapidly broken as a film crew appear within the frame. From here, the meta-cinematic elements of the film become ever more apparent, as do the extremely Gilliam-esque aspects.

Gilliam has always been a highly singular director, and it is no wonder that a passion project like this is as distinctive as anything he has done. The set of the film within the film is littered with large pieces of models, reminiscent of Gilliam’s “Monty Python” animations. The flights of fancy that may or may not be actually occurring recall “The Fisher King” and “The Imaginarium of Doctor Parnassus,” as does this film’s sense of hubris. Despite the zany quality, Gilliam’s camera is largely stable, allowing the larger than life characters. As the camera pans over the film crew in the opening scene, we are introduced to the pretentious and arrogant Toby (Adam Driver, “BlacKkKlansman”), a commercials director and presumably a stand-in for Gilliam himself, which shows a certain amount of self-deprecation on the part of the director. Hired to direct a commercial in Spain with artistic flair, Toby seems disenchanted with the whole shenanigans. His agent Rupert (Jason Watkins, “The Crown” TV series) fawns over him, the producer (Will Keen, “Victor Frankenstein”) constantly complains about Toby’s expensive choices, the Boss (Stellan Skarsgård, “Thor: The Dark World”) is simultaneously flattering and threatening, while the Boss’ wife Jacqui (Olga Kurylenko, “Mara”) likes to mix business with pleasure. As the production falters, Toby discovers a DVD of his own student film “The Man Who Killed Don Quixote,” that he shot in the same area ten years previously (as mentioned, meta). This production starred a local cobbler Javier (Jonathan Pryce, “The Man Who Invented Christmas”), and in the present day, Toby encounters Javier, who now actually believes himself to be Don Quixote.

Then things get weird.

Quixote is a great tragicomic figure, and fittingly the film delivers humor and pathos in equal measure. Javier’s utter belief that he is Quixote gives his scenes of chivalry a touching commitment, while the relationship that grows between him and the befuddled, bemused and bamboozled Toby is both charming and, at times, excruciating. While the film is very funny, this is largely at the expense of Toby rather than Javier, mocking arrogance and pretentiousness rather than laughing at an old man who has taken leave of his senses. The presentation of Javier/Quixote is never mean-spirited, and some of his exploits are moving and raise cheers as much as titters. The irascible Toby is the stereotypically creative soul: Desperate to create under his own terms, possibly a genius but certainly a pain. He recalls previous Gilliam characters such as Larry (Jeff Bridges) in “The Fisher King” and Hunter S. Thompson (Johnny Depp) in “Fear and Loathing in Las Vegas.” Yet the chivalry of Javier/Quixote slowly works its magic on his reluctant squire (or “squirrel”), who comes to accept the increasingly bizarre events he finds himself caught up in. Along the way, our heroes encounter illegal immigrants, a beautiful model/escort who may need recusing but is also highly capable, a malevolent Russian oligarch and what may be a dangerous cult. Come the end of these adventures, one’s mind may be as frazzled as it would be after wandering under the Spanish sun for years.

The Man Who Killed Don Quixote will not be to everyone’s taste. It is a frustrating, often ill-disciplined meander through beautiful countryside and the musings of unhinged minds. It’s also rather good fun. Frequently very funny, both through pratfalls and the absurdity of some of the characters, the film never loses its melancholic undercurrent. As Toby says at one point, Javier’s situation is desperately sad. And yet, come the end of the film, there is something positive about a prolonged delusion, so long as it makes one happy, gives one purpose, and can benefit others. After all, the ridiculousness, hypocrisy and exploitation of “the real world” can seem like giants worth charging at, rather than monolithic and uninterested windmills. 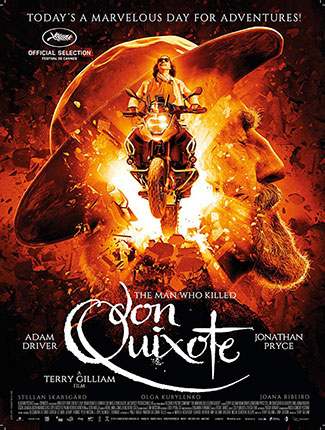