18 years since its FOX premiere (19 or 20 if you count the spots on “The Tracey Ullman Show”), America’s favorite dysfunctional family comes to the silver screen in none other than The Simpsons Movie. I’d, at most, call myself a casual fan of the cartoon — I haven’t watched it religiously for many, many years (thought the mojo was gone), choosing instead to focus my energies on “South Park.” I say this so you’ll understand why I was skeptical when the movie was announced, thinking to myself Matt Groening missed the train by ten years. How right I am after seeing this.

I simply can’t fathom what Groening was thinking when he green-lighted this. Cartoons don’t need realistic or Oscar worthy premises, but what was settled on for The Simpsons Movie had to have been one from the bottom of the barrel. Lake Springfield has become a polluted mess. It’s gotten so bad, a ban on dumping in the lake is drafted. The Environmental Protection Agency (EPA) is notified after Homer (voiced by Dan Castellaneta) circumvents the ordinance and dumps a silo of his pig’s shit into the lake, polluting it further. The solution brought forth by EPA boss Russ Cargill (voiced by Albert Brooks) is to encase Springfield in a dome. Genius. The town turns their ire towards Homer and the family, so they escape to Alaska where they look to live out the rest of their days. That is until they realize they must return to the town that despises them to save the day.

If that took 18 years to develop, then jam a stick up my ass and call me a lollipop. It’s bad enough the idea is stupid, but the writing for it was equally suspect. Gone is the whimsical nature I expect of Bart (voiced by Nancy Cartwright). Sure he’s got a few moments — most notably skateboarding naked — but overall he’s subdued. Lisa (voiced by Yeardley Smith) and Marge (voiced by Julie Kavner), both generally the stalwart figures of the show, are reduced to a sideshow. Lisa offers nothing to the film. Marge is still the moral compass for her idiot husband (Homer, for first time viewers), but somewhere along the way the translation is lost. She seemed like the idiot. My biggest problem, however, is the attempt to give each and every character in the series air time. This leads to asinine scenarios which lend no credence to the movie and leave fans of the characters scratching their heads.

The Simpsons Movie should have been so much more. The general consensus in making the jump to the big screen is to do things not possible on television. A perfect example of this is “South Park: Bigger Longer & Uncut.” Now I’m not advocating taking the Simpsons to that level of dirty, but surely there are avenues that could have been pursued. Having one of the characters run around naked and having Homer flip people the bird hardly seems like the limit is being pushed. The maverick days of Groening appear to have passed because he certainly let a great opportunity slip by.

At the beginning of the movie Homer turns and calls everyone in the theater a sucker. How right he was. The Simpsons Movie is simply a poorly thought out 90 minute television show. If it were 60 minutes shorter, it may have had the ability to make a relatively funny episode. There is little to no endearing qualities — the only folks who will find solace in this offering are the die hard fans who continue to watch the show (even as the writing slips further into the abyss). God help us all if what Maggie says during the ending credits is true. D’oh! 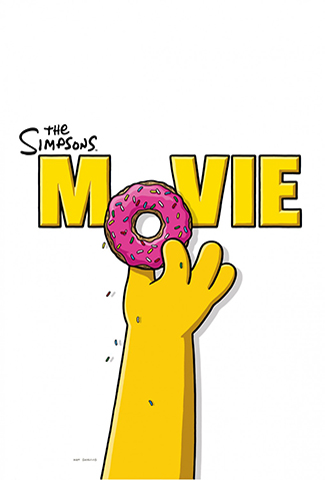