Feeling old? Need a feel good about yourself, quirky kind of movie to raise your spirits? Never fear, Hollywood claims they have something for you (don’t they always?). It comes in the form of the upcoming film: I Could Never Be Your Woman. Will it help you to put the bottle of scotch and sleeping pills down? Anything is possible, although I tend to believe nothing is going to save you if you’ve fallen that far down the rabbit hole.

What we have here, is a light-hearted romantic comedy about coming to terms with getting old and the notion that you’re only as old as you feel. It’s told from the perspective of a 40+ year old woman who falls for a much younger man. I Could Never Be Your Woman puts much of its focus on the goings-ons of Rosie (Michelle Pfeiffer, “Hairspray”). She is a recently divorced lady trying to juggle raising her teenage daughter Izzy (Saoirse Ronan, “Atonement”) and producing the hit television show “You Go Girl.” Her world turns upside when, while casting for a male co-star for the show, she meets Adam (Paul Rudd, “Knocked Up”). He’s in his twenties, good looking and outgoing. And he’s just what Rosie needs to make her feel youthful and beautiful again, if only her conscious (Tracy Ullman, “Corpse Bride”) would stop getting in the way.

The movie mostly works for several reasons. First and foremost, Michelle Pfeiffer is obviously a woman consumed with defying father time (I’m sure she’s had a pull or a tuck somewhere along the line) so seeing her play a like minded person was amusing. The scene at the dance club captures it all perfectly — Adam is dancing like an idiot and her character is completely lost — I’d venture a guess that Michelle herself would feel equally uncomfortable in a similar situation. The older generation just doesn’t get it and playing with Barbie dolls is not a way to compensate for that lack of understanding (it’s Rosie’s way of connecting to her daughter).

Another positive note is the memorable performance by newcomer Saoirse Ronan. She captures the boy problems, puberty issues and parent headaches with grace. I’m guessing she has recent firsthand knowledge of these issues as it doesn’t even look like she is acting. What’s even better is how she deftly handles her mother, and in many cases she is actually the one doling out the advice.

It was also good to see Paul Rudd step up to the plate and tackle a major role. He’s been sitting on the sidelines playing some memorable supporting roles in movies like “Knocked Up” and “The 40 Year Old Virgin.” His child-like exuberance here is a treat to watch.

That being said, there was still a certain something that the movie lacked. That little oomph that manages to take a movie over the hump was missing. Even though it has happened (Ashton Kutcher did hook up with Demi Moore), maybe it was the fact that I had trouble believing that a young, hip actor would find solace in woman who, let’s admit it, has seen better days. They just seemed totally incompatible — their burning love for each other didn’t translate well on the screen. Or perhaps the fault lies in the fact I found Tracy Ullman a complete drag. Yeah, we all know Mother Nature is a bitch, but does she have to be such a complainer too?

Whatever the reason, for what it’s worth, I Could Never Be Your Woman is a relatively good time. Most of the character interactions are weak and unimaginative, but they are evened out by the strong performances of Rudd and Ronan. I don’t see any standout romantic comedies on the horizon, so this may be the best offering for the foreseeable future. You could do worse. 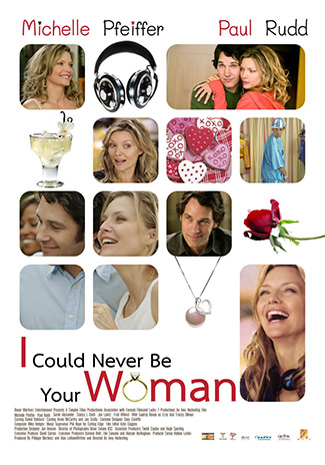