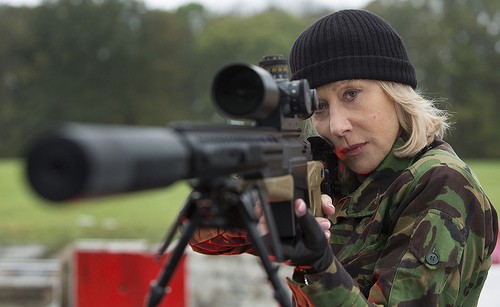 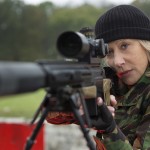 Lightning doesn’t often strike twice in the same place, and that goes double for film sequels. Those expecting this newest DC Entertainment release, Red 2, to capture the same feel as its 2010 predecessor, “Red,” will be a bit disappointed, although it is safe to write that the sting will not be too great as this installment does have some very good things going for it.

The most important factor is the cast, Helen Mirren (“Hitchcock“) as Victoria, John Malkovich (“Warm Bodies“) as Marvin, and Bruce Willis (“A Good Day to Die Hard“) as Frank Ross is back. The trio plays the Retired Extremely Dangerous crew of ex-government black operatives who are being hunted by both good guys and bad often for situations they have no control over. Joining them in the action this time is Mary-Louise Parker (“R.I.P.D.“) as Frank’s sweetheart Sarah Ross, who seems sweet enough . . .

But this is no ordinary over-the-hill gang — this group is extremely lethal (as the piling bodies can attest) and they can most definitely fend for themselves. However, when the blowback from a 30-plus covert operation (code named “Nightshade”) hits the fan, they find things very uncomfortable even for them as they whisk from Moscow to Paris to London in search of a dirty nuclear device that can be carried — conveniently enough — in a small suitcase.

During it all, look for switching loyalties and a plot like “The Eiger Sanction” where no one can seemingly be trusted and friendships turn on a dime to unfold. Director Dean Parisot (“Fun with Dick and Jane“) attempts to keep the action at a maximum and the confusion at a minimum. Sometimes he succeeds, other times, well, not so much. 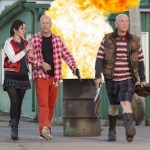 Despite Red 2 being a DC production where dark and gloomy seems to be the watchword (see, for example, “The Dark Knight Rises” and the more recent “Man of Steel“), the main cast seems to have fun with the premise. Malkovich’s character, kind of a dim-bulb weapons expert, gets most of the funnier lines, while Mirren’s suave and sexy senior gets in a few zingers herself. Willis, though, is just Willis, and he barely registers any more of an emotional uptick than he did in his “G.I. Joe: Retaliation” extended cameo even while playing off the often zany Parker.

Ultimately, the film tries to walk a thin line between wide farce, action adventure and real world terrorist suspense and at times has a problem overcoming the schizophrenia such an effort is required to maintain. Still, avid fans of the first installment are likely to find themselves enjoying Red 2 for the most part, while us casual observers could probably take it or leave it. 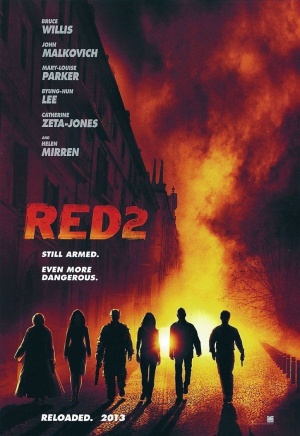