Hotel rooms suck. No matter how gaudy or pretty they’re made up, they still suck. I know this because I travel nearly every week and spend way too much of my time in them. My problem with them is I simply never quite know what has happened in the room prior to my stay and it puts me at unease. Maybe a freak stayed there last week. Or maybe the room was used as a torture chamber during the last world war (yeah, I’m stretching a bit here). Or maybe the room is like the one in 1408 — “inhabited” by something from another realm that enjoys preying on your weaknesses.

1408 stars John Cusack as Mike Enslin, an author and debunker of paranormal phenomena. He’s come to the conclusion that there is no such thing as an afterlife, or even a God, since the loss of his daughter Katie (Jasmine Jessica Anthony). So he travels the country spending a night or two at various hotels, bed & breakfasts and residences that claim to have some form of paranormal activity hoping to be proved wrong. He’s a man with a lost soul. One day, out of the mass of letters a postcard about room 1408 at the Dolphin Hotel catches his eye. He packs his bags, readying himself for another forgettable stay and another haunting disproved.

Upon arrival, Gerald Olin (Samuel L. Jackson, “Black Snake Moan”), the manager of the hotel tries desperately to convince Enslin to reconsider. It is here where we learn of the terrible tragedies that have occurred in the room through the years. Olin has a neat case file all prepared for perusal. A litany of disfigurements, mutilations, psychosis and death, all with accompanying photos. 56 in total. Of course, Enslin brushes it all off as nonsense and insists on getting what he came for. Little does he realize he’ll be getting more than he bargained for.

Once situated in the room, the mayhem begins. First, and for me the most unsettling of all, was the use of the song We’ve Only Just Begun by the Carpenters. You know you’re in for a bad experience when the clock radio in your supposedly haunted room starts an ominous countdown and starts blaring that song. Enslin is freaked as well, but it’s too late; the room isn’t letting him out now. But just as it’s getting creepy, the movie then starts throwing out random scary things a haunted room is supposed to do. It changes the temperature in the room, makes eerie sounds and, you guessed it, it bleeds from the walls and sinks. Luckily, there is a bit more to the movie than just that.

What 1408 is really about, is the slow the descent into madness. Enslin has few demons he’d rather keep covered. He’s guilty over walking out on his wife Lily (Mary McCormack) during her time of need. And he’s especially troubled over the loss of his daughter. It’s a battle of wills; the room attacks his weaknesses — jab after jab — enticing Lily to come to the room to meet a similar fate and producing the embodiment of Katie for him to hold and speak to. And each time the room offers him an out, all he has to do is kill himself. Enslin, on the other hand must try like hell to hold onto his sanity and beat the phantasm at its’ own game. It’s high stakes poker game that I certainly wouldn’t want any part of.

Yet, while the movie does provide some riveting moments, the sense of fear and dread just didn’t resonate with me. I wasn’t scared — not one teensy bit. I will say that John Cusack needs to be applauded for carrying the movie entirely on his shoulders — performing by yourself is one of the hardest things to do. He doesn’t do the justice Tom Hanks did in “Cast Away,” but nonetheless it is a commendable performance. From a personal standpoint, the best supernatural movie set in a hotel is still “The Shining.” Compare the two and I think you’ll agree. 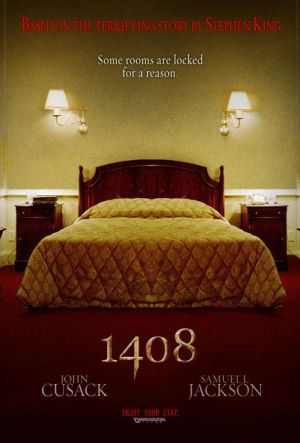