Thank God for John McClane. That’s right I said it. Where would our great country be, if John McClane was not there to save it time and again? I’ll tell you where — right in the shitter. In “Die Hard,” he outwitted an international thief holding people in the Nakatomi Plaza hostage. In “Die Hard 2,” he outwits a bunch of terrorists threatening our airways. Then, in “Die Hard: With a Vengeance,” he outwits another international thief hell bent on blowing up New York. Like I said, we’d be waist deep in shit if it weren’t for him. So when the latest criminal mastermind arrives on the scene in Live Free or Die Hard who else would you want to protect us, Superman?

Bruce Willis reprises the role of John McClane — the one that made him an action star and household name. He’s much older and even more jaded than before. His wife has left him and his daughter hates him. You can also tell he’s tired of the day to day grind of being a senior detective too. So what better way is there to liven up a doldrums day than to get thrown into dealing with a catastrophic event? You see, the government has just been hit with a Firesale. For those that don’t know what that is (don’t worry, I didn’t know either), it is a 3-pronged attack on the infrastructure of a country. First, you take out transportation; next, disrupt the economy (in this case Wall St.) and lastly take down the major utilities (power and water). Lucky McClane finds himself in the middle of the chaos.

Live Free or Die Hard starts off like its predecessors — McClane having a personal crisis. It’s a good way for us to get reacquainted with him; after all it’s been 12 years since we’ve seen him. Shortly after his spat with his daughter Lucy (Mary Elizabeth Winstead, “Death Proof”), he’s told to go pick up Matt Farrell (Justin Long, “Accepted”) a computer hacker dork who is wanted by the FBI. The fireworks begin shortly thereafter. That’s because Farrell isn’t only wanted by the feds, he’s a major liability for the person who contracted him. That man Thomas Gabriel (Timothy Olyphant, “Catch and Release”) wants him dead in a big way. So big in fact, that he’ll destroy everything and anything related to Farrell with all he’s got access to (he’s got a lot). Unfortunately for Gabriel, Farrell is in the care of Mr. McClane and as we all know he is hard as hell to kill.

He survives some ridiculously crazy attempts too. There is a commando filled helicopter, an F-18, car wrecks, some wicked hand-to-hand battles and of course, gunfire galore. Yeah, most of it is unbelievable, but so what — Live Free or Die Hard is so much fun. And it’s not necessarily the action that makes it so enjoyable (although it is a good help), it’s Bruce Willis. He’s likable. He’s bald. He doesn’t possess Brad Pitt looks. He’s so . . . ordinary. Individuals like this are easy to root for. And he portrays the reluctant hero so well. He makes me think that I can perform under immense pressure in the same manner as he does. Plus his witty one liners are cool as shit.

If I had to write a single line to capture what Live Free or Die Hard is, it would be the clichéd, “This movie is an action packed thrill ride.” It really is. It does not have the charisma the original movie had, but it is without a doubt one of the best action movie released in the past few years. Its downfall is it’s been released at the wrong time. Sandwiching it between that little Disney/Pixar flick “Ratatouille” and some super hyped robot movie (what’s it called again?) ensures it won’t receive as much fanfare as it deserves. Someone should be flogged like that albino from “The Da Vinci Code” for that because this movie should be seen. 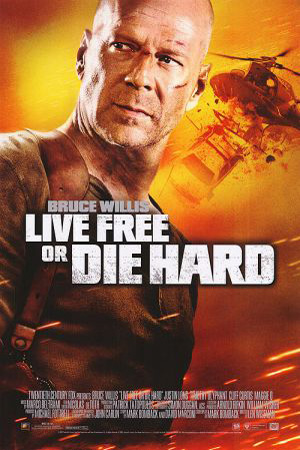