It’s time for a feel-good, self-discovery movie. This time, however, our Hollywood friends have decided that the female lead usually given to Sandra Bullock, Renée Zellweger or Meg Ryan will go to Jennifer Garner. I guess they figured they needed a fresh face to attach to this comedy/romance; just like adding an air freshener to a shit soaked toilet. Yeah, it may look/smell slightly better but it is still a shit soaked toilet that’s been used one too many times.

So what do we get with Catch and Release besides a girl who got knocked up by that worthless, prick Ben Affleck? Not much, I’m afraid. We’ve got Garner, playing Gray Wheeler, a girl whose fiancé dies and while discovering that he was cheating scumbag, realizes she too has a bit of whore in her and starts to hook up with one of his best friends. Great plot, eh? Of course there are small diversions to the story, like how the friends (Kevin Smith, Sam Jaeger and Timothy Olyphant) all react differently to the death of their best buddy. Or how good people are, when, even in sorrow, they find it in their hearts to help a single mom (Juliette Lewis). And there are a few other moments, but truthfully, I fucking forgot what they were — that’s how little it meant to me.

There is no doubt the review of this movie could have been better (if only slightly), hadn’t I already decided I don’t like Jennifer Garner. She can’t act her way out of wet paper bag. Her whole aura and charm is supposed to come from her pouty lips and dimples. That only gets you so far in my book and it lasted for approximately ten minutes for me. As for her love interest, Fritz (Timothy Olyphant), I found him annoying and weaselly. Instead of being happy for Garner’s character, I was aggrevated that she falls in love with him. Grief is a motherfucker and I hope to hell my wife doesn’t grieve like this. No woman should.

But all is not lost! As hoped, the best scenes and dialogue went to the deserving Kevin Smith. For those that don’t know, Mr. Smith has directed some classic films like: “Clerks” and “Dogma.” The characters in those movies were always quick-witted and odd, so it was fitting to see him repaid in kind. Another nice touch was to see the always sexy/skanky Juliette Lewis prancing around. I hadn’t seen her on the screen in a while so seeing her play the dim-witted, rednecky “massage therapist” brought back old memories of her heydey, namely, “Kalifornia.”

Unfortunately, the good showing from Smith and Lewis can’t really elevate Catch and Release very high. Mostly, the movie plods along at a slow pace and you find yourself looking at the watch instead of the screen. This movie really isn’t worth the price of admission. 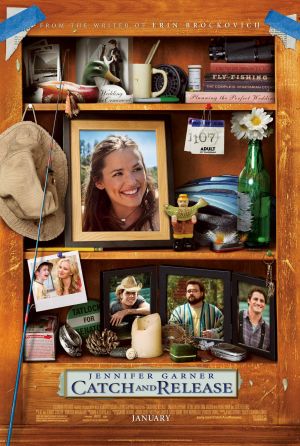