Oh boy. A black man holding a chain that is wrapped tightly around a petite, white girl. That’s all I knew about Black Snake Moan going into the theater. Nothing about a plot, nothing about content — just a picture of Samuel L. Jackson with an enslaved Christina Ricci. Exploitation at it’s finest! This has got to be good!

Or maybe not. While I expected a dirty, filthy, no good, rotten film of perversion and indulgence, I was instead served with a bible thumping story about saving thy neighbor (is that a commandment?) and facing inner fears and demons. What a letdown! In any case, I have to give credit where credit is due — the marketers of this movie did a fantastic job selling Black Snake Moan. The bastards fooled me just like a snake oil salesman fooled the infirmed (notice the snake similarity?).

What we get is a movie that intertwines the lives of Lazarus (Samuel L. Jackson) and Rae (Christina Ricci). Lazarus is a recently separated (wife left him for his brother), God-fearing man with insecurity issues. Rae is a recently alone, trampy bitch (boyfriend goes off to the army) with insecurity issues. One fine day, Lazarus finds Rae dumped in the road, bloodied, bruised and thankfully half-naked. He takes her into his home and nurses her back to physical health. During this time he realizes she not only needs to be fixed in a visible sense, but she is fucked up mentally and spiritually, so he chains her to a radiator and begins his exorcism.

We find that Rae has been sexually abused as a child by her father while her mother patiently turned a blind eye. Due to this lack of love and safety in her youth, she now uses sex as a comfort blanket and randomly fucks men as she sees the need. This obviously never helps her to heal the wounds in a healthy, long term way and soon finds herself looking for satiation again. And again. Lazarus, in the meantime realizes that he can’t fix her without first fixing himself, which means he has to let go of his wife and embrace the things and people he loves. Those things are the Blues (he is a musician), reaching out to a love interest Angela (S. Epatha Merkerson) and his best friend the Reverend R. L. (John Cothran Jr.). And you know the rest or you can surely figure it out in the next five minutes.

This doesn’t necessarily make Black Snake Moan a poor movie. There were, however, a few things that could have made it a bit more entertaining.

Basically, Black Snake Moan follows a standard Hollywood template — demons are exposed, laid to rest and everyone continues along with their lives. Nothing spectacular or particularly note-worthy (unless you count the fact my wife would love to know what detergent is used on Ricci’s panties, as they remain whiter than an albino’s ass throughout the movie). Other than the need to know that you aren’t missing much here. 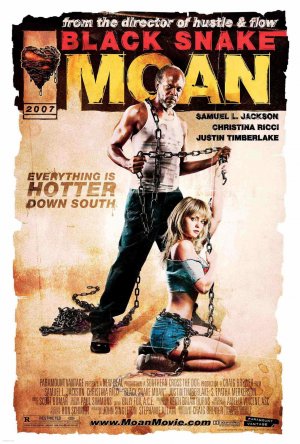