It’s been awhile since a zombie movie offered us something different. Usually, the movie will focus on a band of people trying like hell to survive an onslaught of flesh hungry living dead. While still the same premise “Dawn of the Dead” reinvigorated the genre with updated special effects and surprisingly mobile zombies. “Shaun of the Dead” made a dark comedy out of the zombie flick. In the similar vein comes Fido — where the living dead can now be pacified into servants.

The synopsis is after radioactive material falls from space reanimating the dead and causing them to eat the living, the great Zombie War ensued. After it’s conclusion towns and cites are surrounded by security fences and alarms that keep the last of the free roaming zombies at bay. Maintaining this security for the masses is Zomcom, a corporation heavily invested in zombies. Not only do they protect the citizens from wild zombies, they are in the business of domesticating them with control collars. These collars cause the zombies to lose their urge to feed on flesh and make them easily controllable. So controllable that ordinary people now use them as servants and ornaments.

But that’s not what makes Fido work. It is the creepy, 1960’s “The Stepford Wives” feel to it. Almost like a bizarro world “Leave it to Beaver.” Wacky family and wacky neighbors. This particular family is comprised of Bill Robinson (Dylan Baker), a father deathly afraid of zombies and who ignores his family due to a tragic event in which he had to kill his zombie father. Timmy (K’Sun Ray) is the ignored son who is desperate for attention from his father. Helen (Carrie-Anne Moss), who looks fantastic, is the wife Helen. She wants to keep up the Jones’ and ultimately decides the best way to do it is to own a zombie — even if her husband can’t stand to be near them.

Most peculiar and memorable is the neighbor Mr. Theopolis (Tim Blake Nelson). Here we have a freaky little man who relishes in the use of zombies. He has his very own sex toy in a corpse named Tammy (Sonja Bennett)! Ain’t nothing like tapping the ass of a reanimated corpse (or so I’ve heard). He also aids Timmy by covering up the fact that his zombie, aptly named Fido (Billy Connolly) is killing and feasting on people in the community. Hell, he knowing allows people to be killed to help in the endeavor. Very strange indeed.

But as mentioned earlier the most interesting part of the movie is the absolute strangeness of the community. Children don’t sing happy songs; instead while practicing their aim at the grade school shooting range, they sing the chorus “Head shots are the very best, in the brain and not the chest . . .”. The people in the town are devoid of real feelings. Death isn’t viewed as an end to life, it’s just another incident. People actually celebrate headless burials (it ensures no resurrection). Most curious is how the domesticated zombies fill the void in the boring, lifeless lives of the residents. They’re used for sex, confidantes and best friends. Why interact with a live person if there isn’t an absolute need?

Long story short, Fido mixes just the right amount of quirkiness, bloodshed and nonsense into a big ‘ole blender. What pours out is a well crafted movie that will make you laugh while causing you to raise your eyebrows in a quizzical manner. Don’t ask — just check it out. Oh yeah, did I mention Carrie-Anne Moss looks great? 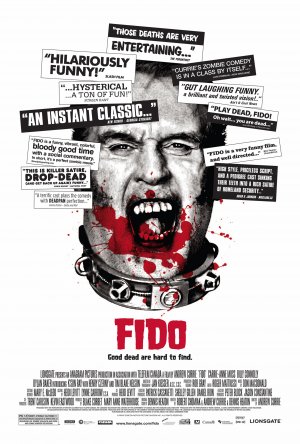