Hot off the heels (if you call four years later a quick turnaround) of the successful “Bruce Almighty,” Hollywood brings to us Evan Almighty.This time however, instead of Jim Carrey carrying the load, the baton has been handed off to the new funny man of cinema — Steve Carell. Unfortunately, the baton was dropped during handoff . . .

Evan Almighty is the story of Evan Baxter (Carell). You may remember him from the first movie as a news anchor for Eyewitness News. Now he’s a newly appointed congressman, who’s been elected on the campaign motto of “Change The World.” In addition to that promise, he’s made a promise to his wife (Lauren Graham, “The Pacifier”) to get closer to his family. Guess who notices? God (Morgan Freeman), of course! And in his infinite wisdom he combines the two. Can there be a better way to change the world and bring the family together than to build an ark? Hell, no! So after initially fighting the Genesis 6:14 notices all around him, Baxter gives in and begins to build his ark. As you can guess, no one, including his wife, understands his endeavor and think he is crazy. But is he? Of course not but I can tell you who is:

Anyone who thinks Evan Almighty is a funny movie.

Steve Carell is an extremely funny guy but apparently someone lost the memo on that when they put this movie together. The boyish charm and naivety he uses for his laughs (see “The 40 Year Old Virgin”) is nowhere to be seen here. Instead they’ve got him doing prat falls galore and acting like a bonehead. It’s almost as if the writers had no motivation to come up with anything worthwhile. Here is a brainstorming session I envisioned:

Writer 1: “I got an idea, let’s make fun of facial hair and clothing.”
Writer 2: “Great idea. We can make his hair grow really long!”
Writer 1: “Yeah, and when he shaves it, it grows back instantly.”
Writer 2: “Too fucking funny. Each day we can make it grow longer too.”
Writer 1: “And make it turn white!”
Writer 1: “That’s an easy ten minutes of screen time filled — now lets fill another ten making him wear a shepherd robes . . .”

You can see where I’m going with this. It wouldn’t have been so bad if they did it once and moved on. But they keep revisiting these lame visuals numerous times throughout the movie. I’m not the smartest guy on earth but even I know to stop doing something if it’s not working. The only, and I mean the absolute single funny aspect of Evan Almighty is provided by the comedy of his secretary Rita (Wanda Sykes). Her nasally, complaining and sarcastic comments made me laugh repeatedly. They should have gotten her into more scenes.

Really, the only good feature of this movie is the message it tries to deliver. Changing the world via one act of random kindness is something we should all partake in. Say, “Please” and “Thank you”, help an old person across the street or donate some of your time to a worthy cause. I’m a firm believer that you reap what you sow, so I strongly encourage people to start planting some worthwhile seeds and stop being such assholes. Oh yeah, Morgan Freeman plays a great God. I actually prefer his renditions over those of George Burns in “Oh, God!.” I find myself listening intently to what Mr. Freeman says, he has a very fatherly aura about him.

The final word: Evan Almighty is a complete letdown. It turns out to be a good family film (no swearing that I can recall, good uplifting message), but as far as I am concerned its’ priority should have been comedy. The writers should be drawn and quartered for doing the unthinkable — making Steve Carell unfunny. 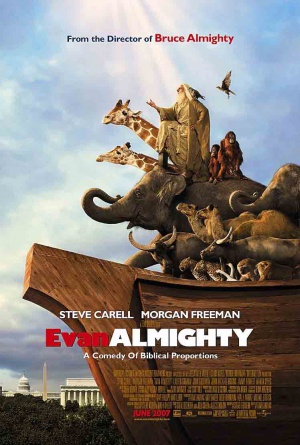