Well, the sixty-something iconic martial arts wonder Jackie Chan certainly has not entirely lost his cinematic A-game when it comes to his trademark kinetic-style kicks and punches that worldwide movie audiences have come to embrace in the legendary performer’s adventurous chop-socky film career. Sure, Chan’s acrobatic skills in comically kicking butt and taking numbers may have understandably slowed down a bit. Nevertheless, it is rather refreshing to see an ageless Chan assume the martial arts mantle as the veteran action star continuing his quest as the cinema’s “clown prince of colorful combat.”

However, what is not so refreshing is watching Chan’s challenging energy wasted in a generically recycled action-adventure comedy in the woefully strained and pointless Skiptrace, a collaborative Chinese-American pet project that has no significant appeal or distinction beyond its maturing star/co-producer Chan going through the familiar motions of zany-inspired mockery. After all, haven’t we already seen the retreaded ribaldry that the charming and impish Chan has demonstrated previously in nostalgic fare such as 1995’s “Rumble in the Bronx” to the more recent boisterous box office buddy flicks such as the millennium-made “Shanghai Noon” and the infectiously amusing “Rush Hour” movie series?

The problem with Skiptrace is that it seems as a labored and redundant rag-tag vehicle trying to bask in the shadowy spirit of Chan’s typical big screen, high-wire Hong Kong police procedurals from yesteryear. Besides, one is better off having Chan crank out a bloated and tiresome “Rush Hour” sequel looking to overstay its welcome rather than to withstand the utterly chaotic and uninspired nuttiness of an annoyingly jumpy Skiptrace possibly looking to branch out into its own film franchise. Perhaps Chan feels safe and secure in these repetitive chop-and-hop comedy thrillers where he teams up with over-the-top cads that magically add to the off-the-cuff hedonistic heft? It worked for the teaming of the Chan-Owen Wilson connection in the aforementioned “Shanghai Noon” western farce and it certainly gained momentum and preferable pop when Chan played straight man to the helium-voiced, showy antics of slick Chris Tucker’s garrulous L.A. cop Carter from “Rush Hour.” Unfortunately one cannot say the same thing about Chan’s Skiptrace partner in the former “Jackass” and “The Dukes of Hazzard” attention-getter Johnny Knoxville. Knoxville, however, is no match for Wilson’s cunning surfer boy mystique or Tucker’s urban rapid-fire wit. Truthfully, Chan and Knoxville feel about as cohesive as a peanut butter and mayonnaise sandwich.

Skiptrace director Renny Harlin (“Die Hard 2,” “5 Days of War”) has definitely had considerable experience in helming hit-and-miss actioners during the course of his film-making career. Sadly, Harlin has not been very productive since the late nineties in terms of churning out consistent hits on the screen and Skiptrace only reinforces as another blemish to his cinema resume. Screenwriters Jay Longino (“Bachelor Party 2: The Last Temptation”) and BenDavid Grabinski (“Cost of Living”) concoct a terminally scattershot and contrived script that lazily plays into the regurgitation of Chan’s signature Asian crime-buster while remarkably making Knoxville even more grating (if that is possible) as the endangered rogue on the run from the baddies that want him eradicated. True, Harlin does have a decent eye for demonstrating punchy action-packed spectacles and the exotic China-based scenery is undeniably breath-taking. It is a crying shame that the disconnected Chan-Knoxville pairing is bogged down in exhaustive fight scenes, sluggish juvenile humor that never quite registers and an overreaching plot riddled with manufactured cheesy slapstick.

Chan plays Hong Kong police detective Bennie Chan whose constant pursuit of his mysterious (and unseen) foe known as the villainous Matador presents an obsession for the seasoned cop to capture this nefarious nuisance. However, the deadly drug bust goes awry and results in Bennie’s partner’s untimely demise. Surprisingly, the void of emptiness is filled when the unctuous American gambler Connor Watts (Knoxville) arrives on the scene in China as he desperately flees the Russian mob looking to make his head a sinister souvenir for their collection plate. Watts is on borrowed time but his eventual run-in with Detective Chan will paint them as moving targets as they constantly duck and dodge their detractors while Bennie concentrates on taking a bound-up Watts in to testify. And yes . . . of course there is unfinished business with tracking down the Matador that has not escaped the determined lawman Bennie Chan.

Clearly, Skiptrace is not as nearly funny as it opts to be in execution. Separately both Chan and Knoxville can be charming screw-ups given the flexibility for them to spread their wings. Together, the handcuffing of this tandem in Harlin’s cockeyed caper does not remotely have the offbeat symmetry or comic foreplay to overcome this tedious “East-meets-West partnership” ricocheting romp. The furious jokes land flatter than a breakfast flapjack. When a clumsy-style crooning of Grammy-winning artist Adele’s notable tune Rolling in the Deep is considered one of the few genuine amusing gags coming out of Chan’s Bennie’s pipe-hole then you know that it is a curious stretch just to find something sketchy in feigned chuckles. Chinese actress Bingbing Fan (“X-Men: Days of Future Past,” and a Chan co-star from a couple of his past films) is the only one that reigns supreme as the disillusioned daughter of Detective Bennie Chan’s partner.

Otherwise, Skiptrace barely skips an original beat in Chan’s prior treasured filmography while we were hoping that Knoxville’s constant mugging and twitchy tendencies would mercifully disappear without a trace. 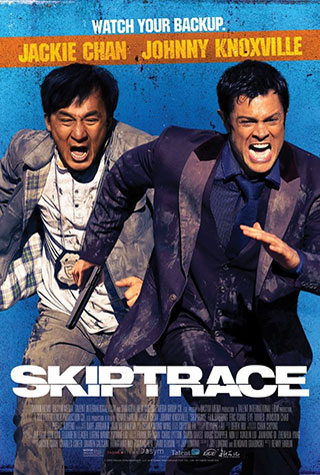