What I want to say about Morgan is that it was a good idea that suffered from a poor execution. Unfortunately, I can’t say that, because, aside from a partial (which is wording it generously) explanation by way of a deus ex machina (which, contrary to what is ostensibly the belief of screenwriters at large, is NOT the same thing as a twist) clumsily tacked on at the end, it is never really clear what that idea was supposed to be.

The entire film — from it’s actual events to its painfully direct dialogue — reads more like the outline of an idea for a movie someone sat up and wrote down in the middle of the night than anything near a finished product. Rather than explaining the premise of the film, because I can’t be sure what it was supposed to be, I will instead list some things that happened in it.

Five years before the present action, a team of scientists finally succeeded, upon their third attempt, in creating a being imbued with artificial life. Exactly how much of this creature (machine?) is human and how much is something else, or why it was created in the first place, is never explained beyond the obligatory sci-fi movie doctor spewing mumbo jumbo nonsense scene in which one of the characters, Dr. Simon Ziegler (Toby Jones, “The Man Who Knew Infinity”), says, “Like a magician, we tricked the neural network into allowing our nano into their ranks.” What we do know is that a corporation (which is referred to as “the corporation” far more frequently than its actual name) has invested a lot of money into this “hybrid biological organism,” an “L9 prototype” referred to as Morgan and with female pronouns by its doctors and handlers, and that, recently, something has started to go wrong.

Enter Lee Weathers (Kate Mara, “Fantastic Four”), a risk management consultant for the corporation. After an abrupt and violent opening sequence, we are shown Lee driving to the secret woodsy lair where Morgan is being kept in order to investigate two recent “accidents” that have led to the “L9” being punitively incarcerated and the corporation sending Lee out to evaluate the viability of their product (the purpose of which, again, we are never told) and their investment into it so far.

When Lee first meets the eccentric, loving, faux family of doctors and handlers taking care of Morgan, this feels like a movie formula you’ve already seen. Rigid, by the book corporate hard ass enters community of casual, close knit, experimental/rebel types; hard ass attempts to implement strict, unrealistic rules; rebels teach hard ass the value of their unconventional, humanistic methods; common ground is ultimately reached; everybody goes home having learned something from everybody else. Unfortunately poor pacing, embarrassingly simplistic dialogue, and an extremely under utilized all star cast quickly unravel any notion of that kind of neat or logical resolution almost immediately. The movie that follows is sloppy surface level nonsense with no stakes and a yawn worthy twist at its end.

I have already mentioned more than once the infuriating fact that we as viewers are never told why these “L” series AIs are being invented and tested in the first place. While this is frustratingly true, what’s almost worse is how frequently we are told, by nearly every character except Lee, how “special” and “smart” Morgan is, without these characteristics ever being demonstrated. While Anya Taylor-Joy, who did an exceptional job in “The Witch” earlier this year and is sure to have a wonderful and profitable career to come, does an expectedly amazing job acting human but not quite, very old for her technical five years — simultaneously emotional as a teenager and cool as a machine and/or older soul — Morgan’s actual motivations are still impossible to parse out. Her violent outbursts, which she regrets, are never talked through with Lee or anyone else, even though we are immediately told that figuring out the cause of them was the reason Lee went there in the first place. Not only that, but the nature of these outbursts is far more animal than machine, leaving one with even more questions regarding Morgan’s purpose and design.

Additionally, much of the tension in Morgan revolves around an impending central question that is apparently asked and answered off screen. What could have been an interesting moral investigation turns into Paul Giamatti (“Straight Outta Compton”) yelling, everyone else incessantly stating tell-don’t-show style exposition literally every time they speak, and Morgan becoming a character we understand less and less and therefore cease to care about as her story goes on. The lazy twist is easily revealed by actions and abilities that would clearly be impossible without it, and as the body count climbs higher and higher, one is left to wonder who gave Morgan all of her extensive hand to hand combat, and driving, and marksmanship training if she was never supposed to be violent or be able to leave the compound in the first place.

By the end, even the few legitimately interesting or visually striking elements of this film (e.g., the first time Morgan meets Lee you see their opposing reflections through the wall of Morgan’s cell superimposed on top of each other, an image that would seem packed with meaning if it did not continue to happen every time a character spoke to her through the glass for the entire movie, regardless of who or why they are) amount to absolutely nothing. The stark contrast between the industrial looking elements of the place where Morgan is being kept and the lush nature around them is lost in the movie’s overwhelming monochromity, and it hurts to see actors like the inimitable Jennifer Jason Leigh (“The Hateful Eight”) attempting to make the best of the ridiculous material they were given to work with.

Going into Morgan, I expected at least a somewhat nuanced exploration of whether or not we should make things, rather than people, sentient and what the implications of that would be. Adult Swim cartoon “Rick and Morty” has an incredible episode (“Lawnmower Dog,” Season 1 Episode 2) in which a dog becomes endowed with sentience and attempts to subjugate not only his masters, but also the entire human race. Humor website Cracked has a video short online that portrays the existential frustration of two animal characters from the Disney classic “Cinderella” after having been temporarily transformed into human’s by the titual character’s fairy godmother. “Under the Skin,” “Ex Machina,” “Her,” “I, Robot,” the AMC television series “Humans,” and so, so many more pieces of pop culture exploring what takes place when something not quite human becomes imbued with certain humanlike characteristics have already been made and work so, so much better than this one. Save your money this fall and watch one of those instead. 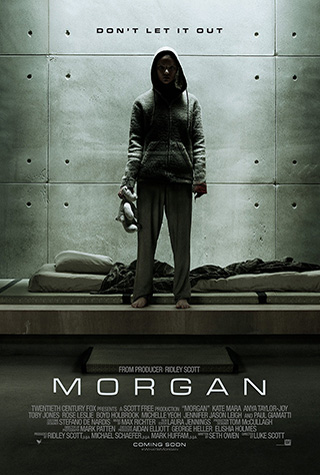