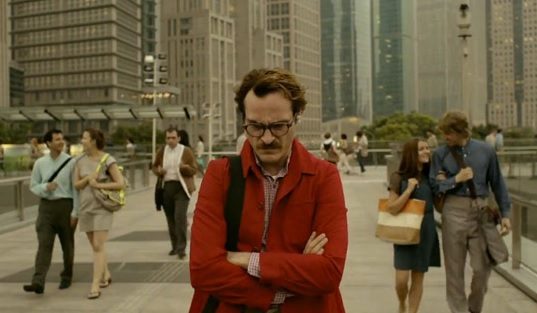 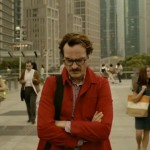 You don’t need to have a master’s in communications to be aware that technology fundamentally changes the way human beings interact with one another, and by extension, changes the way we conduct our relationships. From vehicles allowing distances that would previously take weeks to traverse to be cleared in a matter of hours, to the internet allowing for friendships and romances to bloom from across the globe, the role that the machines we take for granted play in our connection to others cannot be understated. Spike Jonze has taken notice of this with his latest film, Her, and in taking our love affair with and permitted by our gadgets to its logical extreme, has crafted one of the most affecting cinematic romances to come down the pike in quite a while.

Theodore Twombly (Joaquin Phoenix, “The Master”) is a mess. Alone, reeling from a divorce, and working a job that has him paying witness every day to the kind of love he once shared with someone (he writes for a company called “BeautifullyWrittenLetters.com” which makes poetic letters for one lover to give to the other based on provided information), he goes home to an empty apartment every night, plays a video game or two, then goes to bed before repeating the process over again in the morning. However, hope soon comes in the form of Samantha (Scarlett Johansson in a voice performance that could be an all-timer, “Don Jon”), a sentient artificial intelligence he downloads and soon falls in love with thanks to her bubbly personality and infectious energy.

While Theodore and his arc serve as the plot’s main driving forces, it’s Samantha that serves as the film’s heart and soul. Jubilant and ecstatic about being alive yet terrified at the rate she is evolving with new data and connections constantly feeding her infinite potential for knowledge, she is the epitome of both a living, loving consciousness and a hyper-advanced piece of machinery. This dichotomy operates as the crux of the story. The film is less concerned about how the two lovers are unable to physically consummate their relationship or be in the presence of one another (although the issues are touched on) and more about how the two will continue said relationship as new aspects of how Samantha really works are revealed through her journey of constantly discovering and coming to terms with a barrage of new experiences that have her questioning the very nature of her existence.

One of the benchmarks of quality science fiction lies not just in how it uses its world to make observations about our own, but also in what those observations imply. Although Her walks well-tread ground in this regard, the way it applies the limits (or lack thereof) of artificial intelligence and the difference between man and machine to the characters’ relationship grants the film additional depth. While Samantha can read an encyclopedia in under a second and talk to thousands of other AI’s simultaneously, she still needs to process all of this data through a comparatively limited human emotional spectrum, often needing to describe basic feelings such as guilt in terms of metaphor and approximation. Theodore, on the flip side, does not share this burden, but only because his human brain is far less advanced. And with Samantha gradually evolving past him, the future of their love is shrouded in uncertainty. 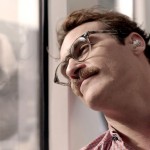 It’s this undercurrent of doubt that makes the film’s romance resonate so deeply. Her does have the requisite high and low points, but it understands that love also has its in-betweens: Those times when you desperately want something to work out, but are unsure if the circumstances will allow it. As Samantha and Theodore’s relationship grows increasingly intimate, so too, paradoxically, does their distance. It never quite paints these hurdles as insurmountable, though, and despite its depiction of such obstacles, its attitude toward them is uncommonly optimistic with even the film’s heartbreaking end hinting at new possibilities both worldly and metaphysical (yes, I said metaphysical) for the future of the couple.

Her continues Spike Jonze’s streak of masterfully utilizing out-there science fiction concepts to carefully examine basic truths about human behavior. Both his most accessible and possibly most personal to date, it simultaneously analyzes our relationship to technology and the nature of love in the modern age with an uncommonly sharp acuity. Bursting with implications and moments that ring true and hit home, it engages intellectually and emotionally as few films recently have. 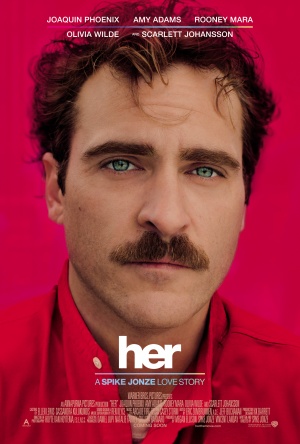