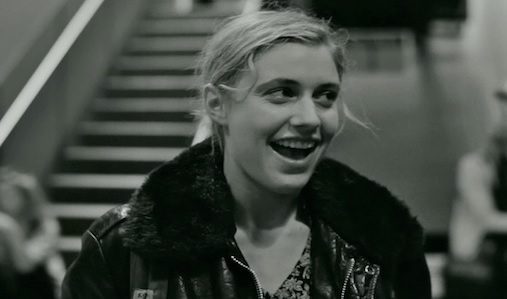 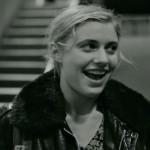 Being called “undateable” is sort of like a team player being labeled “uncoachable,” not a strong recommendation. This label tags maturity-challenged Frances (Greta Gerwig) in Noah Baumbach’s warm-hearted comedy Frances Ha, a film that has genuine affection for its characters. Co-written by Baumbach and Gerwig and supported by an eclectic soundtrack that includes music by French film composer Georges Delerue and the songs of David Bowie, Frances Ha (the title is explained in the film’s final shot) is a film in which people talk and act like real human beings, not cardboard caricatures manipulated by a self-conscious script that “strives for reality.” Though the film is full of lighthearted energy, it does not strain to be quirky or “in your face.” It is clever because that’s the way it is.

Shot in black and white by cinematographer Sam Levy, 27-year-old Frances lives in a Brooklyn apartment with her girl friend Sophie (Mickey Sumner). She wants to be a dancer, and apprentices for a small dance company, but seems to lack the determination to really develop her talent. Though the exact nature of their relationship is not spelled out (what you see is what you get), they are at the very least good buddies who are tight. Frances says her relationship with Sophie is “like a lesbian couple that doesn’t have sex anymore,” but Sophie is not quite as attached and tells Frances that she has decided to move in with her upscale boyfriend Patch (Patrick Heusinger).

Refreshingly, however, Frances Ha is not about relationships being the necessary ingredient of a woman’s self-esteem, but simply one component of an internal growth process. Frances goes out with Lev (Adam Driver), another under-achieving New Yorker, but her economic needs trump her physical ones and she moves in with Lev and his roommate Benji (Michael Zegen) on a strictly platonic basis to save on the rent, although Benji develops a real connection with her (which Frances is blind to). She stumbles through relationships, not making a terrific impression. One woman tells her in talking about her friend, “You look a lot older, but you seem far less mature.”

Frances does not have the kind of job prospects that she alludes to with her friends and her overall veracity is questionable, but she makes up for it with tons of charm. She actually makes some stabs at shaking things up, going home to Sacramento to visit her parents (Gordon and Christine Gerwig, Greta’s real parents), impulsively flying to Paris for a weekend to prove to a friend that she can, and, upon returning after a joyless weekend, taking a job as a “drink pourer” at Vassar where she had gone to school. Unfortunately, the more things change, the more they stay the same. 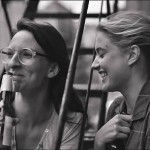 Although Frances Ha is about young New Yorkers living on the margins, it is not and does not aspire to be a commentary on the current economic situation or the plight of young people. The film is about talented folks who have not quite gotten it together and whose level of responsibility lags somewhere below the norm. The characters have their flaws and are not always self aware, but Baumbach recognizes that the process of growth does not happen suddenly and refuses to judge his characters, or make snide commentaries about New Yorkers in general.

Frances Ha does not rely on formula or relationship clichés to make its points, but only on the performances to bring the characters to life. Baumbach and Gerwig take us on a wild ride without any clear signposts, yet the trip is poignant and even beautiful and we can joyously sense the light around the next turn. Unlike the angry, unpleasant Roger in Baumbach’s previous film “Greenberg,” the more you hang around Frances, the more you grow to insanely like her. Though she may be undateable, the film is unmissable. 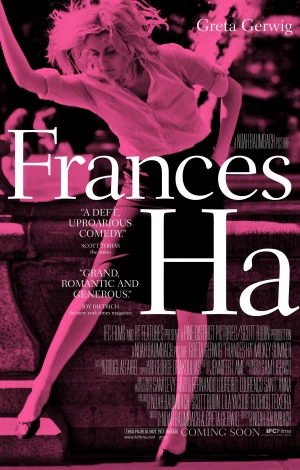